Nissan Motor Co. said Monday it will spend about 2 trillion yen ($16 billion) over the next five years on its electrification push, aiming to make over half of its global vehicle lineup by fiscal 2030 battery-powered or hybrid.

Nissan, which like other global automakers is transitioning toward electrified cars to play its part in global efforts to reduce carbon dioxide emissions, said in its long-term vision it will launch by fiscal 2028 an electric vehicle with all-solid-state batteries that are expected to be safer and give vehicles longer range.

By fiscal 2030, 23 electrified cars, including 15 electric vehicles, will be introduced, according to the No. 3 Japanese automaker by volume. 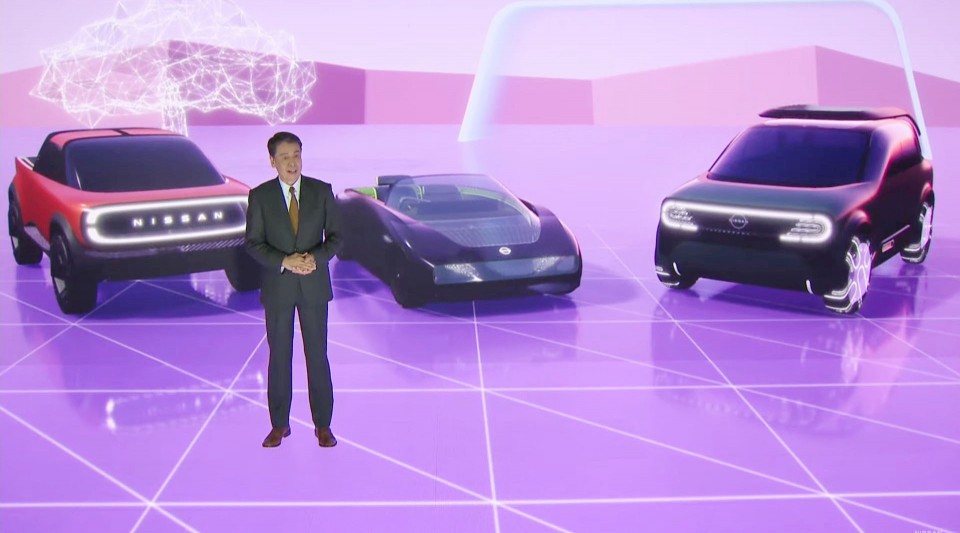 Electrified vehicles include EVs and hybrids, vehicles powered by both an internal combustion engine and an electric motor. Currently, electrified cars account for over 10 percent of Nissan's global model lineup.

Nissan has marketed cars equipped with its e-Power technology that employs an electric motor for driving and a gasoline engine only to charge the battery. Nissan will continue to launch new models for electrification using the technology.

"We will pursue business opportunities that will boost our longer-term profitability toward the era of electrified cars," Nissan CEO Makoto Uchida told a press briefing.

Nissan is seeking to double the energy density of its all-solid-state battery from its conventional lithium-ion battery. It aims to cut charging times by a third and lower the total cost of EVs to a level on a par with gasoline cars, Uchida said.

A pilot plant for all-solid-state batteries will be ready as early as fiscal 2024 in Yokohama near Tokyo where the automaker is headquartered.

Domestic rival Toyota Motor Corp. will invest 1.5 trillion yen by 2030 on the development and production of automotive batteries, with an eye to bringing into use in the early 2020s all-solid-state batteries that are currently being developed. Honda Motor Co. is targeting the later 2020s for vehicles equipped with its solid-state batteries.

Nissan rolled out its first mass-market all-electric vehicle, the Leaf, a decade ago. In recent years, the automaker has been struggling to boost its profitability, making a transition from the expansionist policy pursued under former Chairman Carlos Ghosn.

Nissan had previously said it would make all of its newly launched cars in key markets electrified in the early 2030s.

By region, Nissan's most ambitious target is for Europe, where it is aiming for electrified cars to account for over 75 percent of sales by fiscal 2026.

The figure for Japan is more than 55 percent, and that for China over 40 percent. In the United States, the automaker is aiming for electric cars to account for over 40 percent of sales by fiscal 2030.

"The vision serves as a compass that gives Nissan its direction for the next 10 years and carries significance for Nissan, which has been transforming its corporate culture with past mistakes in mind," Uchida said.

Nissan joins other automakers in setting specific goals as the auto and other industries ramp up efforts to reduce carbon dioxide emissions, in part responsible for global warming, and to attain carbon neutrality.

Toyota is aiming to sell 8 million electrified vehicles in 2030, of which 2 million will be EVs and hydrogen-powered fuel cell vehicles.

Honda has set a goal for EVs and FCVs to account for all of its global sales in 2040, while Germany's Volkswagen AG expects 50 percent of its vehicle sales to be electric cars by 2030 with the number projected to rise to nearly 100 percent in 2040.

Building infrastructure such as charging stations is critical to promoting greater use of EVs, analysts say.

Global sales of electrified vehicles -- hybrids, plug-in hybrids and battery-electric cars -- are projected to increase to 49.19 million units in 2035, an 8.4-fold gain from 5.85 million in 2020, according to Japanese research firm Fuji Keizai Group Co.