An economic policy panel of Japan's government on Monday proposed a fresh stimulus package to get the coronavirus-hit economy back in shape, including beefing up support for companies actively raising employee wages.

As part of its "urgent proposals" toward realizing Prime Minister Fumio Kishida's signature vision of a "new capitalism," the panel also suggested a large-scale subsidy program to encourage the digitalization of rural areas, as well as assistance for building state-of-the-art semiconductor factories to ensure a sufficient supply of computer chips.

The proposals will be reflected in the government's economic package, which Kishida has pledged to craft by mid-November, to help "people in need" due to the economic fallout from the pandemic. The government's tax reform package for fiscal 2022 starting in April will also include provisions for the proposals. 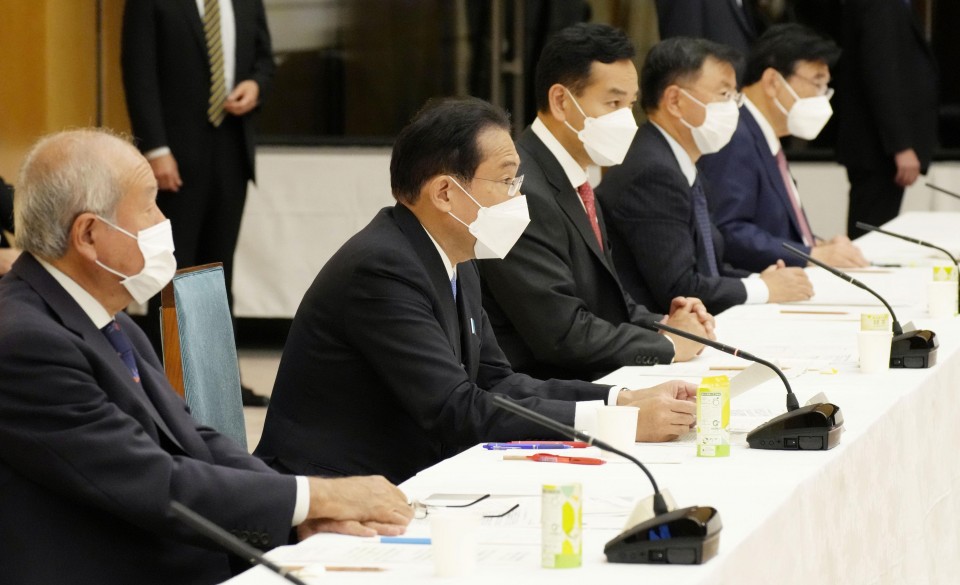 Japanese Prime Minister Fumio Kishida (2nd from front) speaks at a government panel meeting on economic policy at the premier's office in Tokyo on Nov. 8, 2021. The panel proposed the same day a fresh stimulus package to get the coronavirus-hit economy back in shape, including beefing up support for companies actively raising employee wages. (Kyodo) ==Kyodo

Kishida, who became prime minister about a month ago and led the ruling Liberal Democratic Party to victory in a general election in late October, instructed the panel last month to come up with suggestions for the stimulus plan.

Kishida said at a meeting with the panel members that he will set up three subordinate committees soon to help hammer out policy details.

"Through discussions there, we will draw up a 'grand design' and measures to put it into practice in spring next year, and introduce them to the world," he said.

To facilitate pay hikes, the panel said some subsidy programs should be contingent on businesses agreeing to raise their employees' wages.

It has been pointed out that under the current tax break incentive system, companies posting deficits and not paying taxes cannot receive the benefits even if they raise wages.

"Only after distributing (profits) to their employees in the form of wages would consumption expand," the panel said, adding that should there be a rise in consumption and growth in demand, "corporate profits would further increase, leading to (more economic) growth."

As a specific step to promote the digitalization of local regions, the panel suggested legislation to set rules for better use of drones and robots to deliver food and commodities in rural areas with limited means of transportation.

In terms of ensuring Japan's economic security interests amid a global chip crunch, the proposals include preparing "multiple-year" support and necessary systems for attracting high-end semiconductor factories of foreign manufacturers such as those of Taiwan, which the panel said would "contribute significantly to national security."

Presenting a plan to establish a 10 trillion yen fund for universities by March, the panel also highlighted the need to promote innovation by strengthening the science and technology field, saying it will provide a "spark" for generating the virtuous cycle of growth and distribution advocated by Kishida.

Along with funds left over from the fiscal 2020 budget and the issuance of new bonds, the economic policy package will be financed by a supplementary budget for fiscal 2021, which Kishida has said his administration aims to have parliament enact by the end of the year.

With over 30 trillion yen ($260 billion) in fiscal spending, the stimulus is expected to be approved by the Cabinet on Nov. 19 at the earliest, according to sources close to the matter.

Part of the stimulus will also be covered by the initial budget for fiscal 2022 to be drawn up by late December, the sources said.