China and the Association of Southeast Asian Nations have upgraded their ties to a "comprehensive strategic partnership," President Xi Jinping said in a rare appearance at a special online summit on Monday.

The meeting commemorating the 30th anniversary of dialogue between China and ASEAN this year was held with Beijing eager to boost its clout in the region with security tensions with the United States escalating in nearby waters. 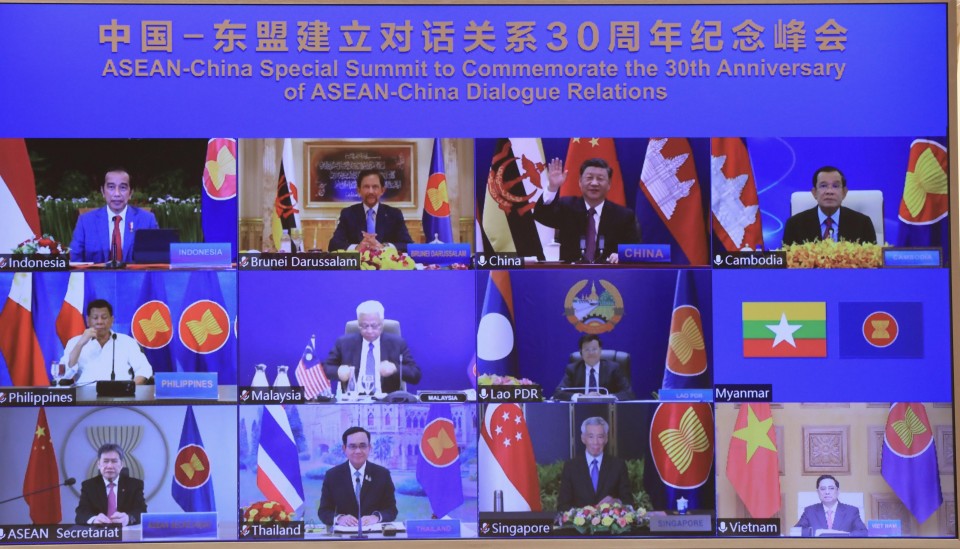 A special online summit of China and the Association of Southeast Asian Nations is held on Nov. 22, 2021. (VNA/Kyodo)

China and ASEAN agreed that their comprehensive strategic partnership is "meaningful, substantive and mutually beneficial," according to a joint statement obtained by Kyodo News.

In a video speech at Monday's summit, Xi was quoted by the official Xinhua News Agency as hailing the good-neighborly friendship and win-win cooperation between China and ASEAN over the past 30 years.

Xi's remarks came as Britain on Monday said the Group of Seven nations, including the United States and Japan, will invite ASEAN countries to a joint face-to-face meeting of foreign ministers in Liverpool in early December. Britain holds the forum's rotating presidency this year.

China, which is competing with the United States for influence in Southeast Asia, is believed to want a code of conduct that will include a provision intended to curb U.S. intervention in the South China Sea.

Claiming sovereignty over almost the entire maritime area, Beijing has built artificial islands with military infrastructure in the waters -- home to some of the world's busiest sea lanes.

In a bid to challenge Chinese actions in the contested sea, the United States has stepped up "freedom of navigation" operations by sailing warships through the waters.

While Xi stressed the friendly relations with its neighbors in Southeast Asia, China and four ASEAN members -- Brunei, Malaysia, the Philippines and Vietnam -- remain divided over sovereignty claims in the sea.

During his remarks, Philippine President Rodrigo Duterte pointed out an incident in the waters last Tuesday where Chinese coast guard ships blocked two Philippine boats at a disputed sea shoal, forcing them to turn back.

Duterte said, "We abhor the recent event in the Ayungin Shoal and view with grave concern other similar developments," referring to the shoal by its Philippine English name.

"This does not speak well of the relations between our nations and our partnership," he said, according to a statement from his office.

ASEAN informed China of its lack of consensus on the issue on Saturday, as Malaysia, Indonesia, Singapore and the Philippines tried to exclude Myanmar's political leaders from the summit, they added.

At the summit on Monday, there was no representative from Myanmar, one of the sources told Kyodo News.