Japanese defending champion Kaori Sakamoto topped the women's short skate at the NHK Trophy on Friday, with Shoma Uno taking the lead in the men's competition at the fourth event of this season's ISU Grand Prix circuit.

Sakamoto scored 76.56 points with a nearly flawless performance at Yoyogi National Gymnasium. She is seeking a spot in February's Beijing Olympics, where she might better her sixth-place finish from her 2018 Olympic debut. 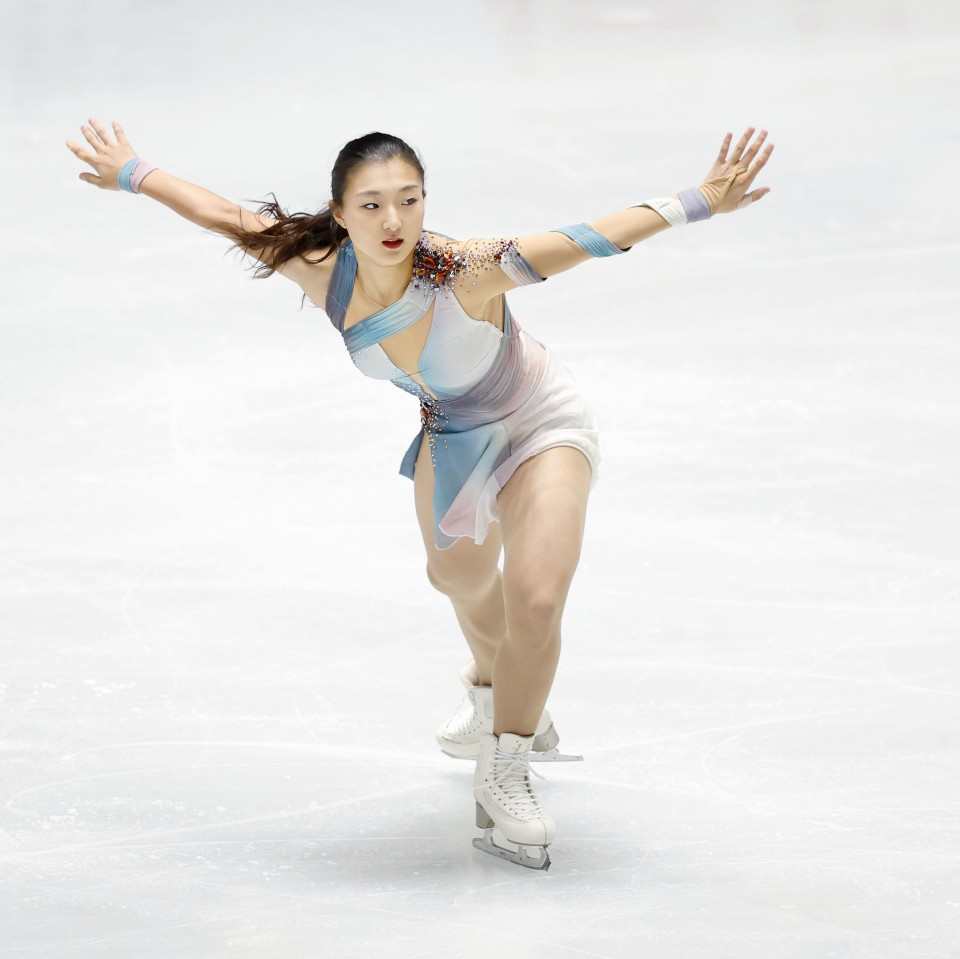 Kaori Sakamoto of Japan performs during the women's short program at the NHK Trophy figure skating competition, the fourth event of the Grand Prix series, on Nov. 12, 2021, at Yoyogi National Gymnasium in Tokyo. (Kyodo) ==Kyodo 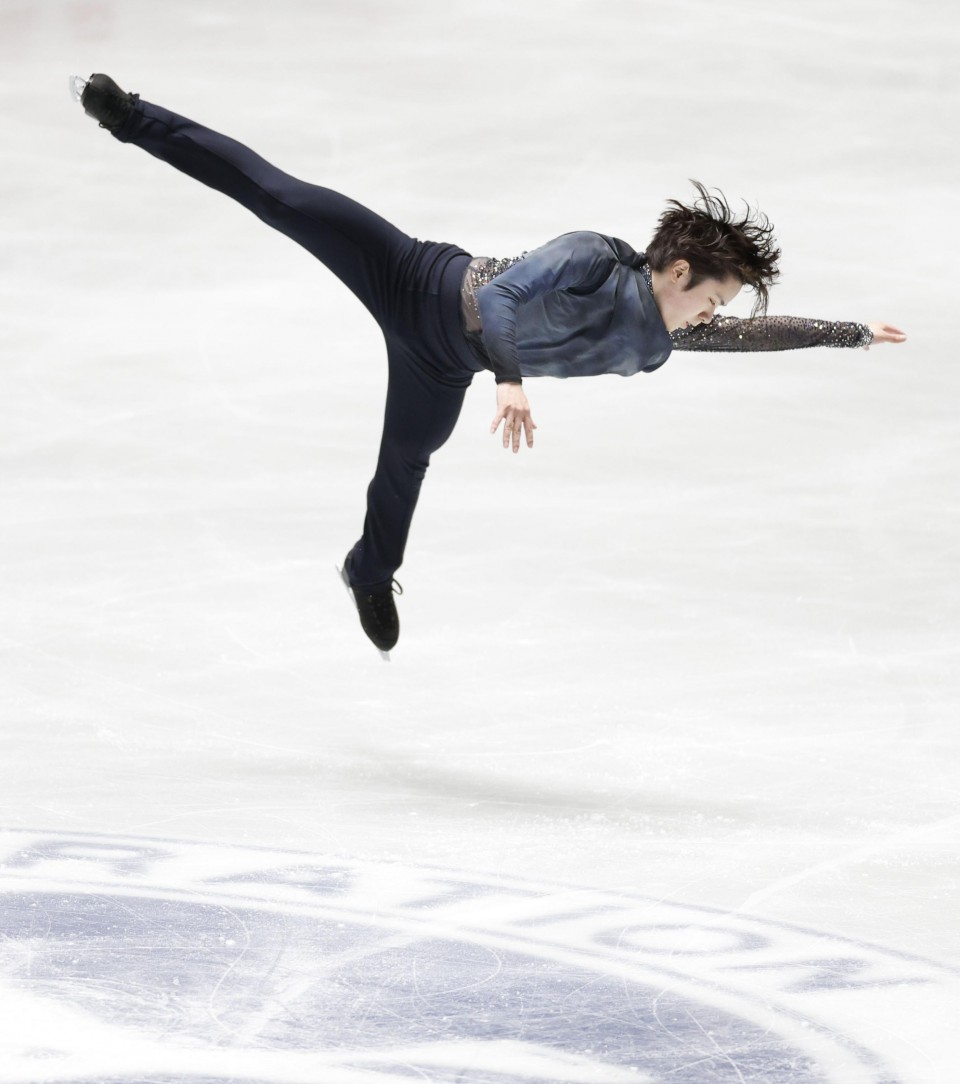 Shoma Uno of Japan performs during the men's short program at the NHK Trophy figure skating competition, the fourth event of the Grand Prix series, on Nov. 12, 2021, at Yoyogi National Gymnasium in Tokyo. (Kyodo) ==Kyodo

The 21-year-old did not make the mistake that led her to finish fourth overall at Skate America, when her triple flip-triple toeloop combination turned into a double-triple combination.

"I went into it trying to give all I have. I had been performing without mistakes from practice, more or less, and that allowed me to stay calm from start to finish," she said. "I feel things are coming along nicely."

Sakamoto won the event last year when only one overseas competitor, South Korea's You Young, took part due to coronavirus travel restrictions.

"My aim was to land all my jumps so I'm relieved to have achieved that," Kawabe said. "I wasn't expecting to come second so I'm really surprised. My expression needs works."

Uno nailed two quad jumps to score 102.58 and win the men's short skate, followed by Vincent Zhou of the United States in second and Cha Jun Hwan of South Korea in third.

Uno the 2018 Olympic silver medalist was not happy about under-rotating his jumps.

"It's not about my (overall) performance being good or bad. I don't like the fact a triple turned into a double," he said of the mistake during a quad toe-loop triple toe-loop combination. "I lacked that bit of will power."

Riku Miura and her partner Ryuichi Kihara, the first Japanese to reach a Grand Prix podium in pairs when they were runners-up at Skate America on Oct. 23, scored 73.98, their short-program personal best to sit third.

"We're getting to where we perform well constantly in each tournament. I wasn't thinking we'd get a personal best so that was great," said Kihara.

In ice dance, Kana Muramoto and Daisuke Takahashi scored 70.74 in the opening rhythm dance, to sit sixth, a place above rival Japanese couple Misato and Takeru Komatsubara, who scored 68.13.

"The pressure was big but we got to skate first and it was great to have given our all," said Takahashi, the 2010 Vancouver Olympics men's silver medalist, who is now vying for Japan's sole ice dance spot in Beijing.

"I was calm and managed to keep good distance (with Muramoto). It was a rhythm dance that boosted my confidence." 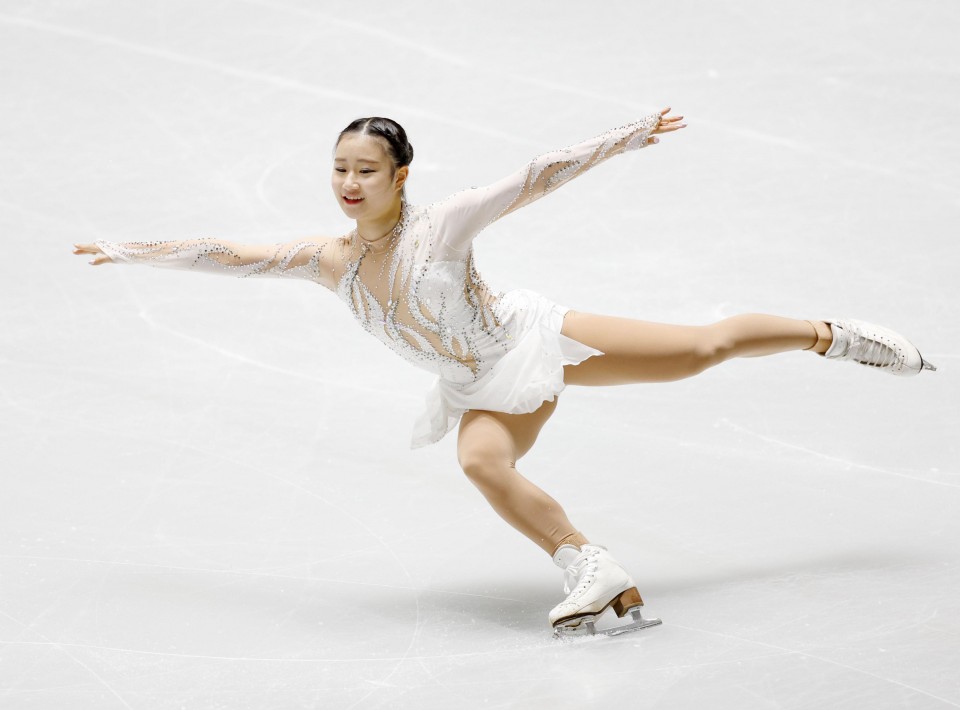 Mana Kawabe of Japan performs during the women's short program at the NHK Trophy figure skating competition, the fourth event of the Grand Prix series, on Nov. 12, 2021, at Yoyogi National Gymnasium in Tokyo. (Kyodo) ==Kyodo