Terunofuji heralded the start of his reign as sole yokozuna on Sunday by downing new komusubi Kiribayama on the opening day of the Kyushu Grand Sumo Tournament.

Terunofuji's first-day win at Fukuoka Kokusai Center did not come cheaply as Mongolian Kiribayama kept the yokozuna in check despite allowing a left underarm belt hold, getting a right overarm belt hold of his own to force a long contest. 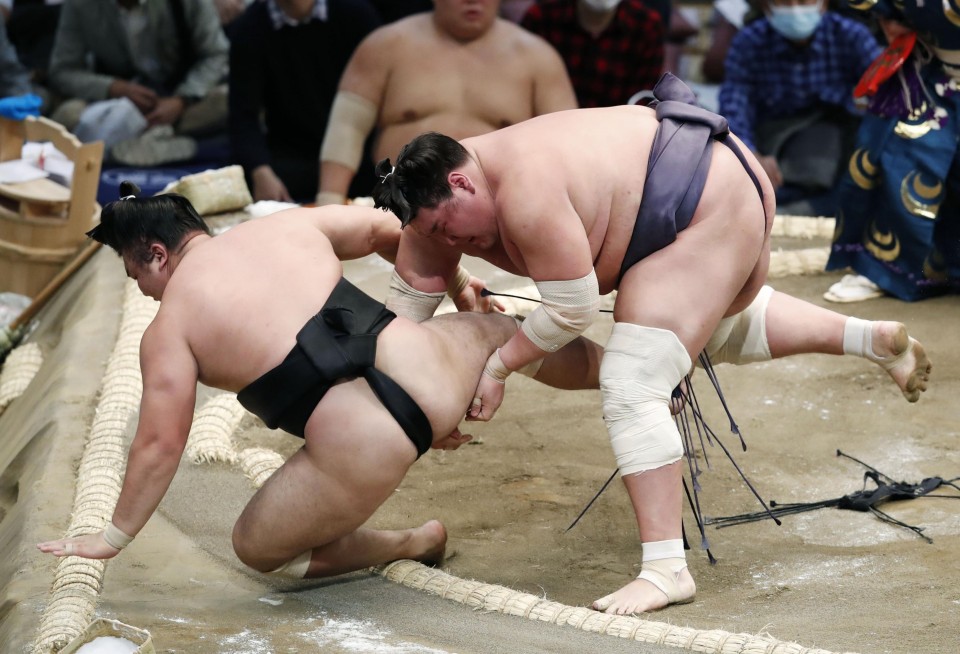 But the grand champion's sheer size and power allowed him to launch a pulling underarm throw to force Kiribayama off balance before he used his right arm to clinch the win with a "komatasukui" over thigh scooping body drop.

Terunofuji's remarkable journey so far has seen him drop from the second-highest rank of ozeki all the way down to fifth-tier jonidan as recently as March 2019 due to serious knee injuries and other health issues.

But he has made an unprecedented revival since, battling his way back to the elite makuuchi division in July 2020 and winning three of seven tournaments as he earned his promotion to yokozuna.

One place below Terunofuji in the rankings, ozeki Shodai suffered an opening-day defeat as No. 1 maegashira Daieisho was given plenty of time and space to reel off his trademark shoves.

Shodai seemed happy to be on the receiving end given his superior physique, and initially swung his counterpart sideways. But Daieisho stayed on his feet and attacked the ozeki's throat and chest before pushing him down from the raised ring.

Ozeki Takakeisho, who survived a demotion scare in September by posting a winning record, got off to a winning start, beating No. 1 Wakatakakage.

Takakeisho showed little signs of trouble from the neck injury in July, going head-on and quickly forcing Wakatakakage to the edge before thrusting him down to the clay while stepping backward.

Sekiwake Mitakeumi had a sound bout to open the meet, standing firm to stem the initial charge of No. 2 Onosho before swiftly advancing to force him over the straw bales.

Meisei, however, suffered a defeat in his second tourney at the sport's third-highest rank. He drove No. 2 Takanosho to the edge but was easily dodged by the rank-and-filer before getting thrust down.

Abi pushed out fellow No. 15 Chiyomaru to win on his return to the elite makuuchi division after he was given a three-meet suspension in July last year for violating coronavirus protocols. He returned to action in March starting in the third-tier makushita division.

Former ozeki Tochinoshin pulled out ahead of opening day with lower back pain, handing fellow No. 13 Yutakayama a win by default.

Tochinoshin's stablemaster Kasugano said the former ozeki could make his return during the meet "if the pain subsides" as the Georgian faces a potential drop to the second-tier juryo should he post a particularly poor record.

The tournament was held at its usual venue in Fukuoka for the first time in two years due to the COVID-19 pandemic, with the spectators limited to 3,700, half the capacity of the venue in the southwestern city.