Local governments in Japan are stepping up efforts to help elderly people use smartphones so they can catch up with the advancing digitization of administrative services.

The Tokyo metropolitan government held an event in a shopping district in Nakano Ward on Oct. 10 to answer questions from senior citizens about how to use smartphones.

"It was very helpful. It was easy to ask questions," Michiyo Kono, a 69-year-old local resident, said after dropping by the venue. "I hope the event will be held at other places like supermarkets as I know there are people around here facing problems because they can't use the internet," she said. 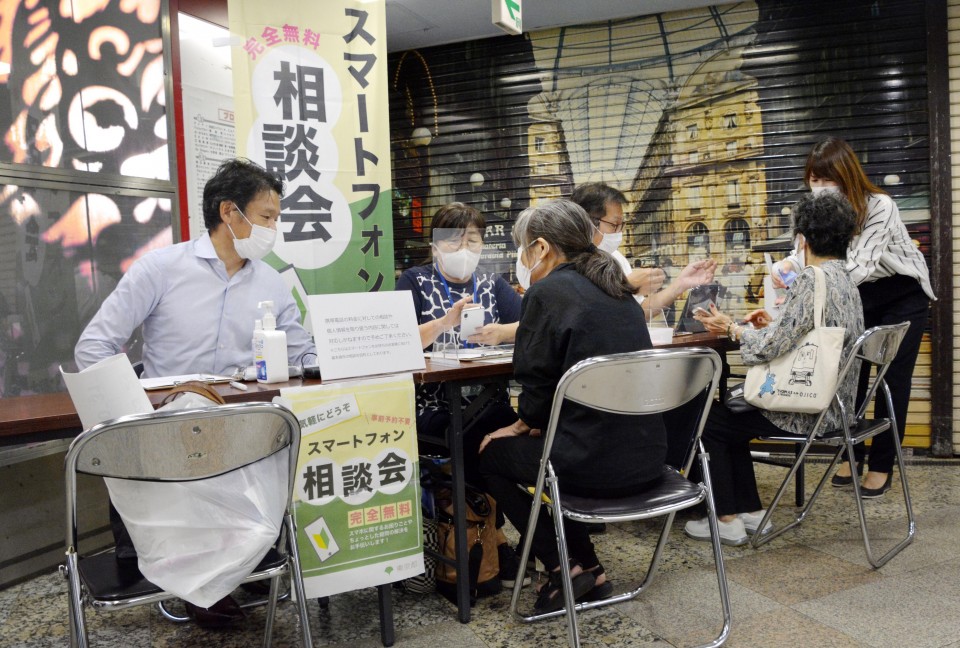 The Tokyo metropolitan government holds an event in Tokyo on Oct. 10, 2021, to answer questions from senior citizens about how to use smartphones. (Kyodo)

The generational "digital divide" was made more conspicuous by the difficulty that older people without internet access faced in making reservations for coronavirus vaccinations.

On Oct. 10 and 11, the Tokyo government, in cooperation with telecommunications companies and other concerns, held sessions to help the elderly use smartphones at a total of about 30 venues including in cultural centers, shopping malls and residential complexes.

Some 540 people visited the sites, half of whom said in a questionnaire survey they had no one nearby they could turn to ask questions about using smartphones.

With online services expanding rapidly amid the COVID-19 pandemic, the Tokyo government plans to hold 200 sessions to answer questions about smartphone use from elderly people and 750 classes where they can experience devices for themselves through March 2022.

The sessions will be held at places readily accessible to elderly people and offer more basic lessons than those provided by the Internal Affairs and Communications Ministry at mobile phone shops, according to the metropolitan government. "The first thing is getting people accustomed to using smartphones regularly," an official said.

The Hamamatsu city office in Tokyo began lessons at community centers in May to teach elderly people how to use both smartphones and organize video conferences, with the latter seeing a surge because of more people voluntarily refraining from going outside.

The lessons are so popular that participants are occasionally chosen by lottery, a city official said. The use of smartphones is also a topic taken up at a lifelong education program offered by the municipal government.

The Shibuya ward office in Tokyo has begun lending smartphones free of charge to provide an opportunity for elderly residents to begin using them. Starting in September, devices were lent to some 1,700 applicants aged 65 and older for two years, with the ward picking up the tab for all communication and call fees.

According to a survey by the ward, a quarter of the some 43,000 elderly residents in Shibuya do not have smartphones. The office thus started lending out smartphones free of charge, so that as many people as possible can share information on evacuations using the free Line messaging app in the event of a disaster in real-time.

In a related development, staff members of a hospital in a residential complex in Yokohama, Kanagawa Prefecture, offer advice about the use of smartphones to elderly people face-to-face or via the Line system when requested.

The program includes opportunities to communicate via smartphone with members of Kanagawa University's soccer club, who use vacant apartments in the complex as dormitories.

The program "prevents the isolation of residents and enables young people to learn a lot by getting in touch with the elderly," said Taro Yokoyama, 41, director of the hospital.