World leaders on Monday called for urgent action to tackle global warming at a key U.N. climate summit, with some pledging new funds to support developing nations adapt to the changing climate and other major polluters making new commitments to cut emissions.

British Prime Minister Boris Johnson kicked off the leaders' session of the 26th U.N. climate conference in Glasgow, known as COP26, with a dire warning of a ticking "doomsday device" and a demand for concrete action to phase out coal power and other efforts.

"Humanity has long since run down the clock on climate change. It's one minute to midnight on that doomsday clock, and we need to act now," Johnson said in his keynote speech as host of the event. 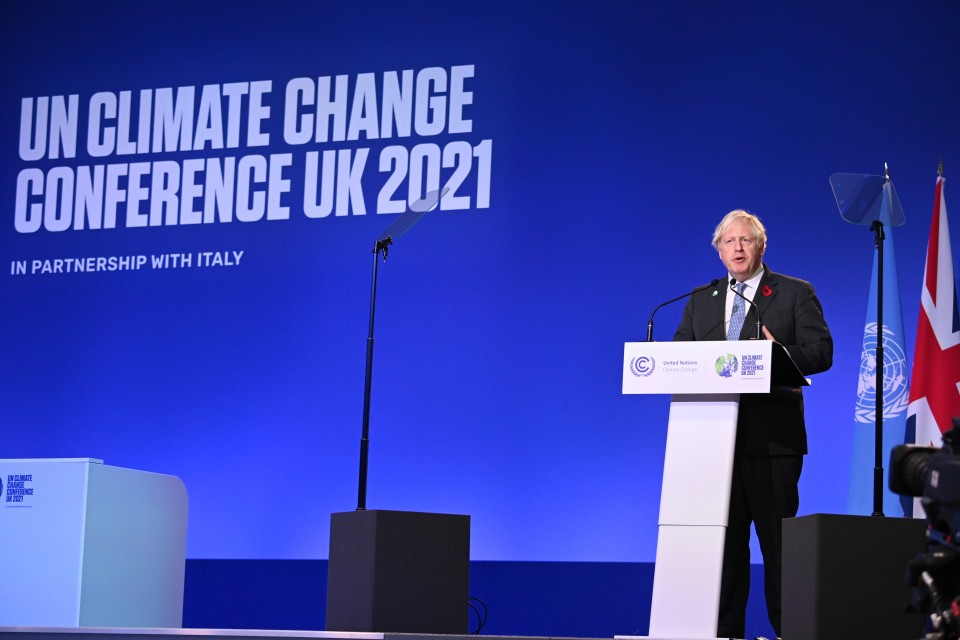 More than 100 world leaders gathered in the Scottish city, launching two weeks of negotiations that would help determine whether countries can keep the goal of limiting global warming to 1.5 C from pre-industrial levels within reach.

As leader of the world's third-largest carbon dioxide emitter, Indian Prime Minister Narendra Modi said he is aiming for 2070 as a target for his country to reach net zero emissions, making such a commitment for the first time.

But the timeline fell behind many countries that are already seeking to move toward net zero emissions by 2050, which scientists say is necessary to prevent the 1.5 C line from being crossed. Countries such as China, Russia and Saudi Arabia are aiming for 2060.

With developed countries yet to deliver on their promise to mobilize $100 billion per year in support of climate action in developing countries, the British government said it intends to commit to an additional 1 billion pounds ($1.4 billion) in international climate finance by 2025.

Britain doubled its climate finance commitment to 11.6 billion pounds over five years in 2019, and the latest announcement would bring the figure to a world-leading 12.6 billion pounds by 2025, if the economy grows as forecast, according to the government.

Developing countries -- often the most vulnerable to climate change impacts such as droughts and rising sea levels despite historically contributing the least global warming-causing emissions -- voiced frustration with the insufficient support delivered by developed nations.

Climate finance provided and mobilized by developed countries totaled $79.6 billion in 2019, up only 2 percent from 2018, according to an assessment by the Organization for Economic Cooperation and Development.

Japanese Prime Minister Fumio Kishida, who has secured a public mandate through the ruling coalition's victory in Sunday's general election, plans to join the second day of the leaders' session and explain his country's updated 46 percent emissions cut target by fiscal 2030 from fiscal 2013 levels.

COP26 is drawing attention as the most significant event since COP21 in 2015, which led to the creation of the landmark Paris climate accord that aims to limit the global temperature increase to well below 2 C, preferably to 1.5 C, to avoid the catastrophic impacts of climate change.

It is also the first meeting since the United States -- the world's second-largest CO2 emitter after China -- rejoined the Paris deal under President Joe Biden earlier this year in a major policy reversal from his predecessor Donald Trump.

Biden, who is seeking to revive U.S. leadership on climate change and multilateralism, said he wants to demonstrate to the world that his country is not just "back at the table," but "hopefully leading by the power of our example."

In the run-up to COP26, the Biden administration unveiled a goal to halve emissions from 2005 levels in 2030, making the U.S. commitment around twice as ambitious as earlier promised.

The administration also said Monday that Biden aims to provide $3 billion in U.S. climate finance annually by fiscal year 2024, touting it as "the largest U.S. commitment ever made to reduce climate impacts on those most vulnerable to climate change worldwide."

Chinese President Xi Jinping did not attend the event but called for stronger actions to jointly tackle the climate challenge in a written statement, according to the state-run Xinhua News Agency.

"The Chinese president stressed the responsibility of developed countries in tackling climate change, saying that they should not only do more themselves, but should also provide support to help developing countries do better," according to Xinhua.

Meanwhile, over 100 leaders, representing nations that are home to more than 86 percent of the world's forests, committed to work together to halt and reverse forest loss and land degradation by 2030, according to a declaration issued at the event.