Jakucho Setouchi, a Japanese novelist and Buddhist nun known for depicting the lives and loves of modern women in award-winning novels such as "The End of Summer" and "Ask the Blossoms," has died of heart failure, her home temple said Thursday. She was 99.

Setouchi, who was awarded the Order of Culture in 2006, was also active in anti-war and anti-nuclear movements. She died Tuesday morning at a hospital in Kyoto, western Japan, where she resided. 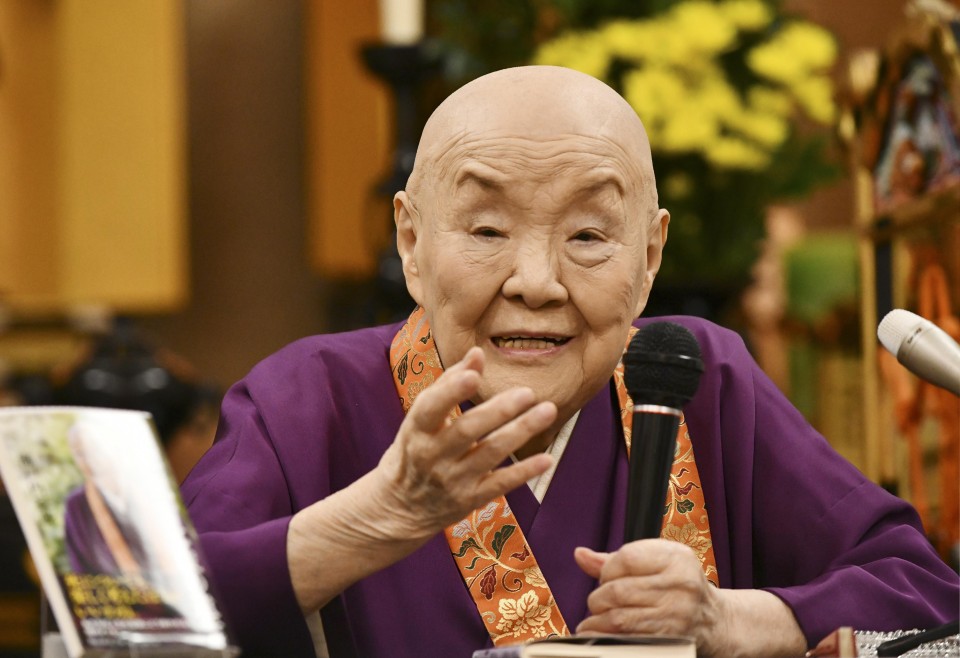 She had been hospitalized due to poor health and undergoing treatment since last month, according to Jakuan, a temple she founded in 1974.

A funeral will be held only with relatives, and a post-funeral gathering in her memory will take place in Tokyo at a later date.

In 1998, Setouchi completed the translation of "The Tale of Genji," written by Murasaki Shikibu in the early 11th century, from classical to modern Japanese in 10 volumes, helping create a new boom of interest in the work.

A native of Tokushima city in western Japan, Setouchi, whose secular name was Harumi Setouchi, became a nun in 1973 at the age of 51, 30 years after graduating from Tokyo Woman's Christian University.

She married in 1943 while a student at the university but later divorced and began writing. In 2017, she published her last full-length novel "Inochi." She continued her writing, however, contributing serialized works for two literary magazines.

Tetsuo Yamaori, a religious studies scholar and close friend of Setouchi, said that she inspired and comforted many with her novels, which she continued to write until her last days.

"Her fresh, youthful heart and strong conviction to correct what needs to be corrected in both individuals and the nation did not wane even at the last moment," he said.

Chief Cabinet Secretary Hirokazu Matsuno expressed his condolences at a regular press conference, saying that Setouchi made "great contributions to Japanese culture" through her translation of the classic tale and many achievements as a novelist.

"She devoted herself to listening to the thoughts and feelings of those in distress through her sermons and also contributed to social activities," he said.

Setouchi gave regular sermons at her home temple in Kyoto's Sagano area, and served as the chief priestess of Tendaiji Temple in Iwate Prefecture.

She had called for the abolition of nuclear power plants since the March 2011 earthquake and tsunami wrecked Tokyo Electric Power Company Holdings Inc.'s Fukushima Daiichi nuclear plant, leading to the release of radioactive materials and mass evacuations.

She joined an anti-nuclear hunger strike in 2012 and participated in a rally in front of the Diet building in 2015 to protest national security-related bills.