TOKYO - Japanese Prime Minister Fumio Kishida said Monday he will draw up a stimulus package by mid-November to prop up the coronavirus-hit economy following the ruling coalition's victory in the general election.

The Liberal Democratic Party and its smaller partner Komeito retained a comfortable majority in the House of Representatives, the powerful lower chamber of parliament, on Sunday, suggesting voters opted for stability over the opposition's promises for change.

Despite losing seats and suffering a number of defeats of high-profile candidates, the LDP headed by Kishida performed better than media forecasts and secured enough seats to effectively control all standing committees and steer the legislative process.

Kishida said the stimulus package, featuring financial aid for businesses and people hit hard by the pandemic, will be funded by an extra budget the government aims to pass within the year. 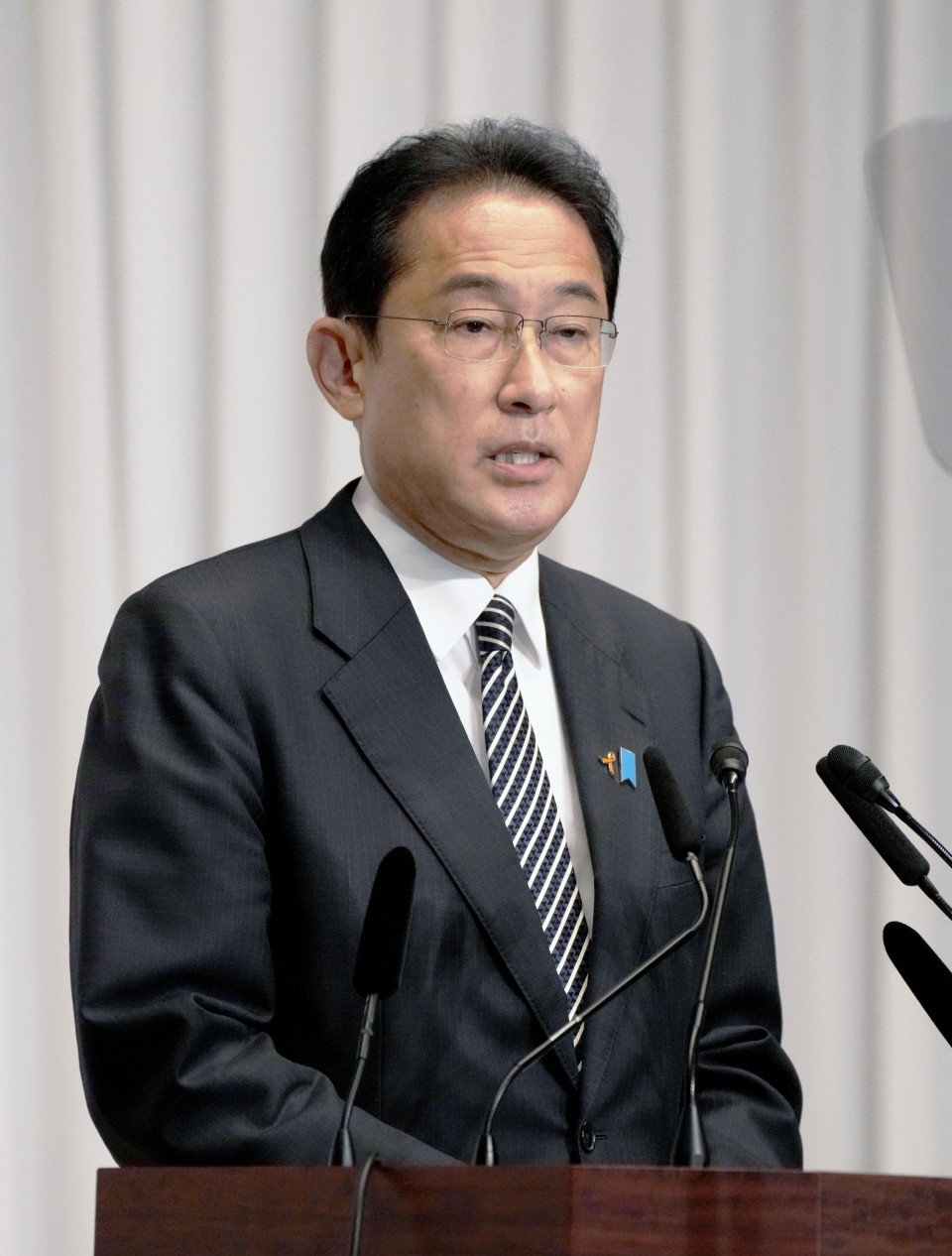 "We will get this to the people as quickly as possible," Kishida said at a press conference, adding he will consider resuming the "Go To Travel" campaign to boost domestic tourism.

"It was a tough election, but the outcome shows the will of the people to task my government with shaping the future of this country," said Kishida, who became prime minister on Oct. 4.

The main opposition Constitutional Democratic Party of Japan, which had criticized the government's pandemic response and vowed to reduce income disparities, also lost seats, down from 110 to 96, despite fielding unified candidates through an agreement with other groups including the Japanese Communist Party.

Meanwhile, the Japan Innovation Party, an opposition group that did not join the CDPJ-led alliance, won 41 seats, nearly quadruple the number it held prior to the election.

Parliament is set to convene a special session on Nov. 10 to confirm that Kishida will remain in power, with the Cabinet, expected to remain largely unchanged, to be launched the same day.

One face that will not be in the new lineup is Foreign Minister Toshimitsu Motegi, who has been tapped for the LDP's No. 2 post of secretary general. He replaces Akira Amari, who has asked to resign following his shock loss in his single-member district in Kanagawa Prefecture.

Other big-name losers in the LDP include former economic and fiscal policy minister Nobuteru Ishihara and Kenji Wakamiya, minister in charge of the 2025 World Expo in Osaka.

Graph shows the latest update on the numbers of seats won by the ruling bloc (red) and the opposition including independents (blue). The ruling camp had 305 seats before the election, and the opposition 156. A total of 233 seats are needed for a majority in the 465-seat chamber.

The lower house has special powers not given to the upper chamber, the House of Councillors, including having the final say in electing the prime minister, passing state budgets and ratifying international treaties.

On the campaign trail, Kishida had promised to spur economic growth while redistributing the spoils to the middle class under his vision of a "new capitalism." He pointed to falling COVID-19 cases across the country and vowed to secure more hospital beds to treat patients, in preparation for a possible sixth wave of infections.

The election results, which defied media polls that predicted the LDP would lose many more seats, reduce the likelihood of Kishida joining the ranks of the "revolving door" prime ministers that Japan witnessed from 2006 to 2012.

In addition to deciding whether Kishida would gain a public mandate, the election was also seen partly as a referendum on nearly nine years of LDP-led government under Kishida's predecessors, Shinzo Abe and Yoshihide Suga.

The CDPJ and its allies argued the government has botched the coronavirus response, and that the "Abenomics" policy mix has only served to widen income disparities by boosting corporate earnings and share prices while failing to achieve higher wages.

But the opposition's efforts to get behind the same candidates in more than 200 battleground constituencies misfired, with the JCP falling from 12 seats to 10.

"It's very unfortunate that we lost seats and I feel apologetic for that," CDPJ leader Yukio Edano told reporters on Monday. CDPJ Secretary General Tetsuro Fukuyama has expressed his intention to resign to take responsibility for the disappointing results. 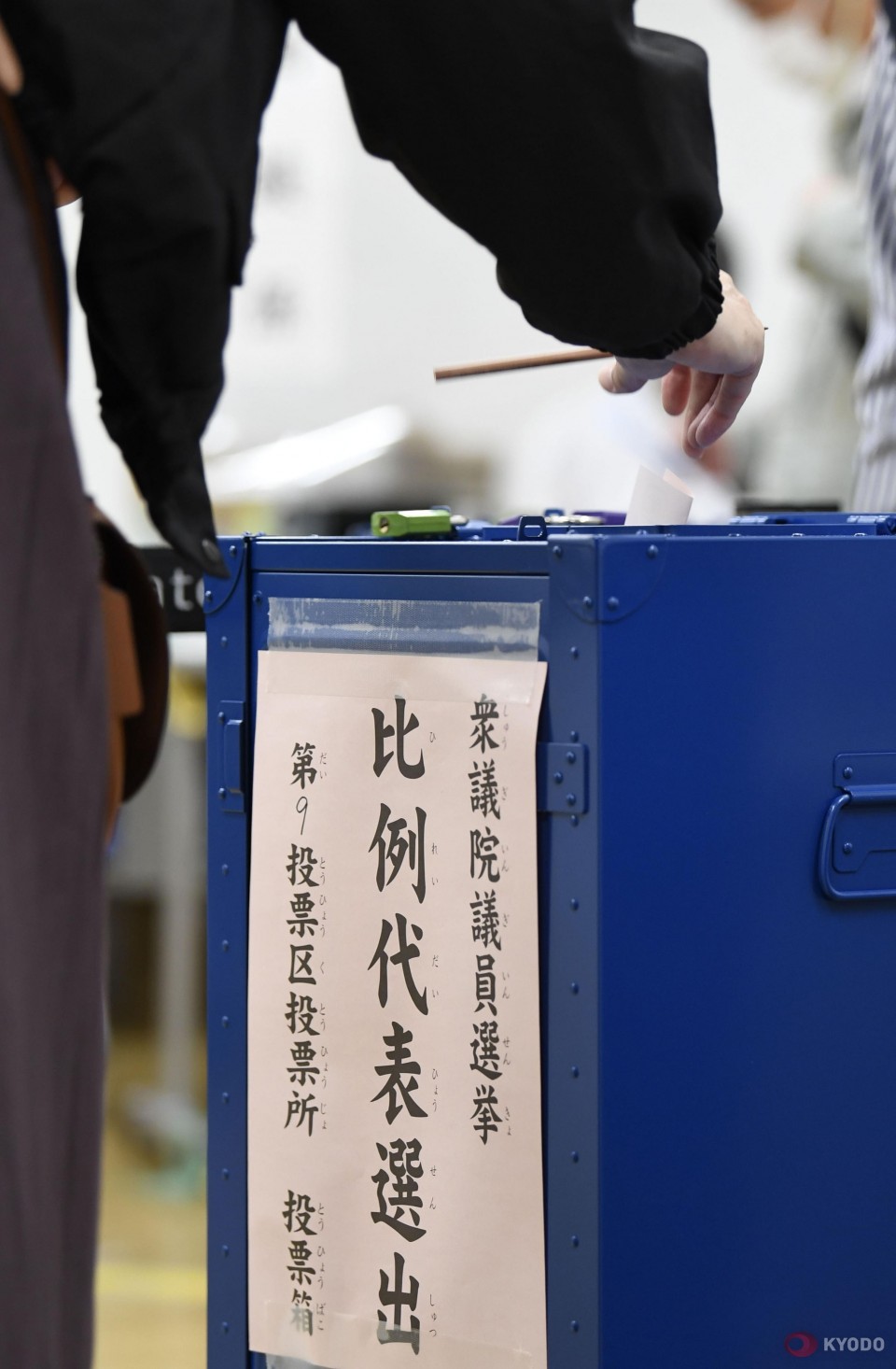 A vote is cast at a polling station in Tokyo in a House of Representatives election on Oct. 31, 2021. (Kyodo) ==Kyodo

The CDPJ also saw a number of notable defeats in single-member districts, including heavyweight Ichiro Ozawa in Iwate Prefecture, and deputy leader Kiyomi Tsujimoto, who fell victim to the JIP's surging popularity in Osaka Prefecture and failed to even gain a seat under proportional representation.

The opposition sought to win over voters by calling for lowering the consumption tax to lessen the burden on low- and middle-income households.

They also argued for allowing married couples to take separate surnames and recognizing same-sex marriage, as well as abandoning nuclear energy in favor of renewable energy to reduce carbon emissions.

The ruling coalition, meanwhile, criticized the CDPJ and its allies for banding together despite their differing stances on foreign policy and national security, saying such discrepancies made them unfit to govern.

The CDPJ supports the Japan-U.S. alliance while the JCP calls for abolishing the 1960 security treaty between Tokyo and Washington -- a scenario that would please China, Russia and North Korea.

Kishida, a former foreign minister, said in Monday's press conference he is eager to meet with the leaders of like-minded countries including U.S. President Joe Biden, and that his government will explore ways to bolster defenses against threats including North Korean missiles.

The LDP aims to double defense spending to around 2 percent of gross domestic product and says it will consider acquiring the capability to launch strikes on enemy bases as part of efforts to boost deterrence.

"It's one of the various options we are discussing," Kishida said.

Of the lower house seats, 289 were single-member constituencies decided under a first-past-the-post system. The other 176 were filled by proportional representation, in which parties are awarded seats based on how many votes they get in 11 regional blocks.

The internal affairs ministry said 55.93 percent of eligible voters cast ballots, compared with 53.68 percent in the previous 2017 lower house election, and it was the third worst turnout for a general election in the postwar era. A record-low 1,051 candidates ran, fewer than the previous low of 1,131 in 2005.