East Japan Railway Co. on Wednesday invited the media to observe a test run of an autonomously operated bullet train in Niigata Prefecture as it eyes introducing trains without drivers in the future amid a labor shortage.

During the test conducted in the early hours of Wednesday, the 12-car bullet train ran without any manual intervention after a driver switched it to automatic mode. The E7-series train was piloted remotely from a control center. 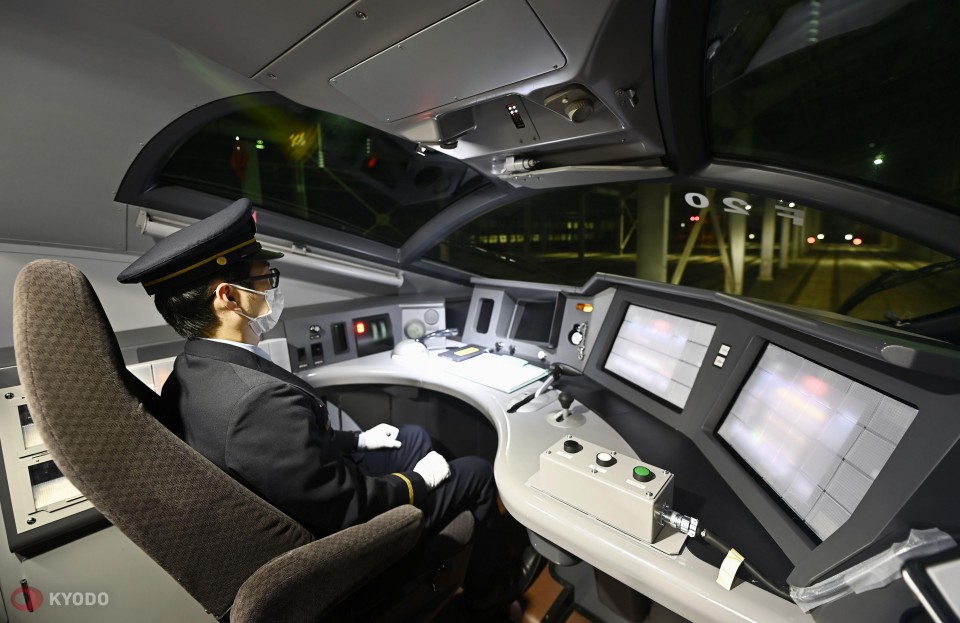 A self-driving test for a shinkansen bullet train is under way in Niigata, Japan, on Nov. 17, 2021, with a driver seated in the cockpit to deal with a possible emergency. The test, the first of its kind for shinkansen, began on Oct. 29, and was opened to the media on Nov. 17. (Kyodo) ==Kyodo

It was the first test in Japan of the autonomous operation of a bullet train already in commercial service.

While the eventual goal is driverless trains, several drivers and other staff members were aboard the train during Wednesday's test to respond to any emergency situation.

After running about 5 kilometers from Niigata Station and nearing the targeted highest speed of 110 km per hour, the train stopped at the Niigata shinkansen train depot. It missed its intended stopping point by 8 centimeters, but this was within the allowable margin of 50 cm.

A JR East official said the autonomous train stoppage technique was "almost equal" to operation by a driver, adding the company hopes to improve it further.

The railway company has been conducting autonomous shinkansen test rides for technical checks since Oct. 29. It has also been testing bringing the trains to an emergency stop.

It said, however, that it has yet to decide when to fully introduce the autonomous driving system.

For driverless operations, it is also necessary to remotely monitor the tracks and inside the trains. JR East is therefore also testing the use of local 5G high-speed communication services to send high-quality video footage from trains to the control center in real time.