Rugby: Japan swept aside by Ireland in opening match of European tour

Wing Andrew Conway ran in a hat-trick for the hosts, who left nothing to chance as they prepared for a meeting with the All Blacks in a week's time.

Jamie Joseph's side barely encroached on opposing territory at a rainy Lansdowne Road, scoring their only points when Siosaia Fifita crossed against the run of play in the second half to cut the score to a 41-5 deficit.

Ireland captain Jonathan Sexton celebrated his 100th cap with a try and four conversions in front of a near full house as fans returned to the stands in Dublin.

The sub-par performance was Japan's worst loss under Joseph and a major letdown for a side that pushed Australia to the brink two weeks ago and lost 39-31 to Ireland in July.

"We were totally outplayed and you sort of have to accept that," Joseph said. "They didn't just get us in one particular area, they outplayed us in all areas."

The Japan head coach indicated the possibility of a selection shakeup for his squad as they build toward the 2023 Rugby World Cup in France. 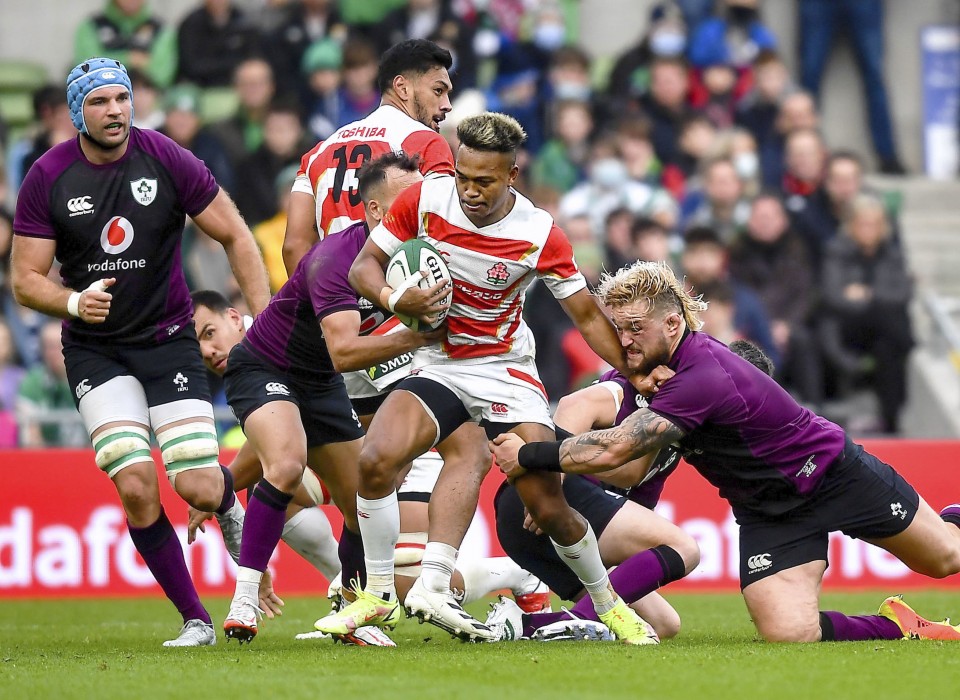 Kotaro Matsushima of Japan (C) carries the ball during the national team's 60-5 loss to Ireland in a test match in Dublin on Nov. 6, 2021. (For editorial use only) (Kyodo)

"It's a long way to go, so maybe we need to look at our players squarely and make sure we've got the right guys on board," he said.

The Brave Blossoms will face Portugal next Saturday before wrapping up their tour against Scotland on Nov. 20.

Joseph said his world No. 10 team could not afford to underestimate the 19th-ranked Portuguese, who are coming off a run of credible performances.

"Portugal have had some really good successes lately. They took Georgia close, beat Russia. We're their main test match, so they'll be coming hard at us," he said.