Japanese Prime Minister Fumio Kishida pledged at a U.N. climate summit on Tuesday up to $10 billion in funds over five years to assist Asia along the path to zero carbon emissions, using his world stage debut to show his leadership in curbing global warming.

"Japan will press onward to undertake efforts toward net zero emissions in Asia, the engine of global economic growth," Kishida said at the climate conference in Glasgow, Scotland, in a hastily arranged trip following the general election on Sunday.

The aid, which came on top of $60 billion in climate finance Japan has committed in June, is aimed at bringing developed countries closer to delivering on their promise to mobilize $100 billion per year in climate finance -- one of the key focuses of the ongoing U.N. climate talks, known as COP26. 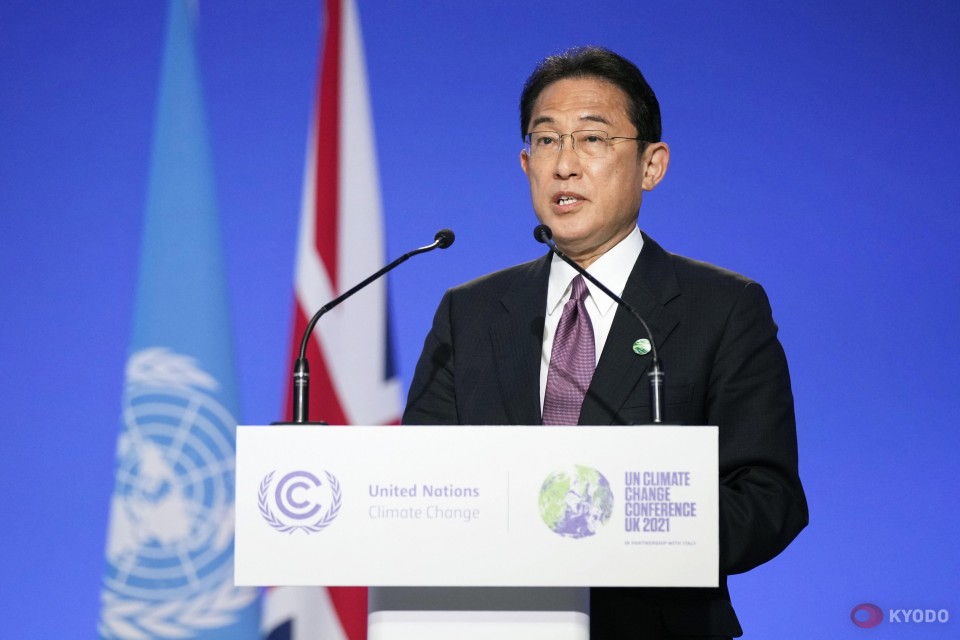 More than 100 world leaders, including U.S. President Joe Biden, have gathered from Monday for the two-day leaders' session at the beginning of COP26 to provide political momentum for further actions to avoid the catastrophic impacts of global warming.

Meeting on the sidelines of the climate summit, Kishida had his first face-to-face conversation with Biden since taking office on Oct. 4 and agreed to strengthen the bilateral alliance and closely cooperate in realizing a free and open Indo-Pacific in the face of China's assertive territorial claims and military buildup.

In the address during the second day of the leaders' session, the new Japanese leader reaffirmed Tokyo's goal to achieve carbon neutrality by 2050 and reduce greenhouse gas emissions by 46 percent by fiscal 2030 compared with fiscal 2013 levels.

Japan will "continue strenuous efforts in its challenge to meet the lofty goal of cutting its emissions by 50 percent," said Kishida, a former foreign minister.

Having come up with the more ambitious emissions cut target in the run-up to COP26, environmental experts have said Japan's standing on climate issues, which has often been poorly rated, has greatly improved.

But critics have been disturbed by what they view as Japan's insufficient efforts to phase out coal domestically. Japan, a resource-poor country, is the fifth-largest carbon dioxide emitter after China, the United States, India and Russia.

Kishida emphasized that Japan will play its part not just by cutting its own emissions but by beefing up climate finance to support developing countries in their fight against the crisis.

Developing countries are often the most vulnerable to climate change impacts such as droughts and rising sea levels despite historically contributing the least global warming-causing emissions.

In a side event hosted by Biden on infrastructure development and climate change, the Japanese leader called for international cooperation to provide "high-standard" projects and international rules-based development finance.

The United States, Japan and other like-minded countries have been seeking to counter Beijing's growing clout through an alternative to Chinese President Xi Jinping's signature Belt and Road Initiative.

Critics say the Chinese initiative lacks transparency, has poor environmental and labor standards, and has a record of saddling developing countries with debt.

Tokyo views all three countries as key partners in advancing a free and open Indo-Pacific.

Kishida will be back in Japan on Wednesday, as his schedule remains tight following Sunday's House of Representatives election.

He opted not to show up in person for the Group of 20 summit that was held in Rome over the weekend, instead joining virtually.

But he seems to have decided he should at least attend COP26, even if the trip had to be short.