A 14-year-old junior high school boy died after being stabbed by another student at his school in central Japan on Wednesday, local police said, with an investigation under way on whether the two had been involved in some kind of altercation.

The police arrested the alleged attacker, also 14. He has admitted to stabbing his schoolmate, Yuzuki Ito, at around 8 a.m. at Jushiyama junior high school in Yatomi, Aichi Prefecture, and the police said they confiscated a 20-centimeter-long kitchen knife that was used in the attack. 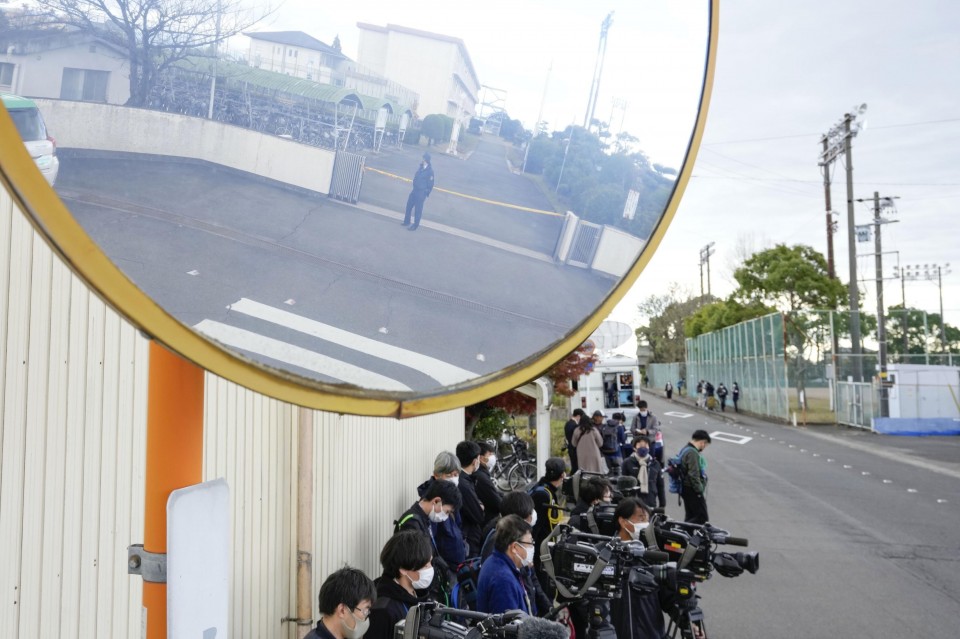 Reporters and TV crews gather outside a junior high school in Yatomi, Aichi Prefecture, on Nov. 24, 2021, after a student there was stabbed by a schoolmate. (Kyodo)

The suspect allegedly stabbed Ito in the stomach with the intent of killing him, the police said, adding he was rushed to a hospital, where his death due to hemorrhagic shock was confirmed at around 10:30 a.m.

The police arrived at the scene after receiving a call from a teacher reporting that two students were involved in an altercation. The teacher rushed to the scene after hearing a scream, and grabbed the boy who seemed to have attacked Ito.

However, they were in the same class during the second year and went to the same elementary school, according to the education board.

No injuries were reported among other students and teachers.

According to the board, the knife seized from the scene did not belong to the school, with the police believing the suspect may have brought the weapon in.

The board said it was not aware of any trouble between the two boys and will establish an independent committee to ascertain what led to the incident.

At a press conference held Wednesday afternoon, Takumi Okuyama, head of the board, said he is deeply saddened over the situation.

The father of a 15-year-old female student, who is also in the third year, said he contacted the school to ask about the incident, but was told it cannot respond.

"I am worried about the mental health of students who witnessed the incident," he said.

According to the board, there were 138 students enrolled at the school as of Nov. 1, of which 47 were in the third year.