President Tsai Ing-wen held talks Thursday with a European Parliament delegation making a historic first visit to Taiwan, much to the consternation of China which claims the democratic, self-ruled island as part of its territory.

With a purported disinformation campaign by China aimed at polarizing Taiwanese society in mind, Tsai stressed the need for a "democratic alliance against disinformation," such as by stepping up cooperation with Europe. 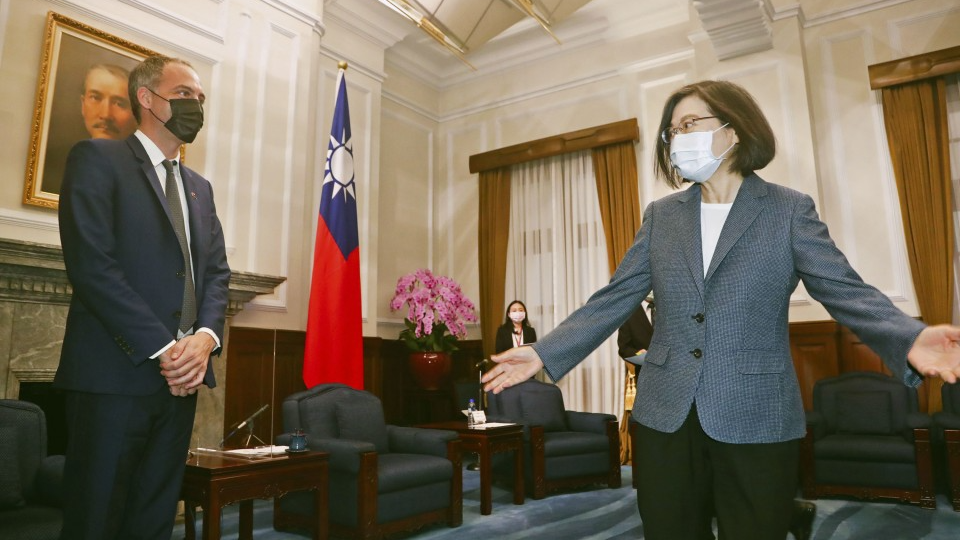 Raphael Glucksmann, a French member of the parliament who heads the delegation, called for increased cooperation at "the most senior levels" between the European Union and what he called a "key like-minded partner and democratic ally."

Chinese Foreign Ministry spokesman Wang Wenbin said at a regular press conference in Beijing on Thursday that China "strongly deplores and firmly opposes" the visit of the delegation.

"The one-China principle is the political foundation for the establishment of China-EU diplomatic relations and development of ties," Wang said, alluding the principle that the mainland and Taiwan are both part of a single nation.

"No official interaction with the Taiwan authorities in any form is an inherent requirement of the one-China principle," he added.

Wang urged the European side "to redress its mistake and avoid sending wrong signals to 'Taiwan independence' separatist forces, lest it should cause a serious impact on China-Europe relations."

The EU delegation's visit comes at a time when the Tsai government is seeking to strengthen ties with Europe against the backdrop of intensifying pressure for unification from Beijing, which considers Taiwan to be a renegade province.

In her opening remarks, which were streamed online, Tsai said she understood that the delegation had come to learn more about how Taiwan handles disinformation.

"Taiwan is also willing to share its experience in combating disinformation with our European friends. This will deepen our partnership and help safeguard the free and democratic way of life we enjoy," she added.

Glucksmann, for his part, said, "We came here with a very simple, very clear message. You are not alone. Europe is standing with you."

Claiming that the EU is facing large-scale actions "orchestrated by authoritarian regimes" that are aimed at deepening polarization and weakening democracies, he added that the delegation hopes to learn from Taiwan about its "capacity to fight interference."

China is said to be directing sustained cyberattacks and disinformation efforts against Taiwan. Taiwan's government says the island faces 30 million cyberattacks each month.

Among other issues that were likely taken up at the talks were the response to the coronavirus pandemic and strengthening economic ties between the EU and Taiwan, including over semiconductors.

Glucksmann has been the subject of retaliatory sanctions by China due to his criticism of alleged human rights abuses against the Uyghur Muslim minority in the far-western Xinjiang region.

The European Parliament in October adopted with an overwhelming majority a report recommending that EU-Taiwan relations be strengthened.

The 13-member delegation, including seven EU parliamentarians, arrived in Taiwan on Wednesday for a three-day visit. The group met with Premier Su Tseng-chang later that day.