Honda Motor Co. is integrating artificial intelligence into its vehicles to warn drivers of imminent traffic hazards and help them avoid accidents caused by human error, as the Japanese car and motorcycle maker aims to meet its target of zero fatalities by 2050.

Honda's AI-powered driver assistance technology -- unveiled Thursday by the automaker in what it says is a world-first -- checks a driver's movements and health using a monitoring camera and sensors.

The No. 2 Japanese automaker by volume said it is planning to put the technology, including functionality that alerts against risks by tightening the driver's seatbelt or emitting audible warnings, into its vehicles in the latter half of the 2020s. 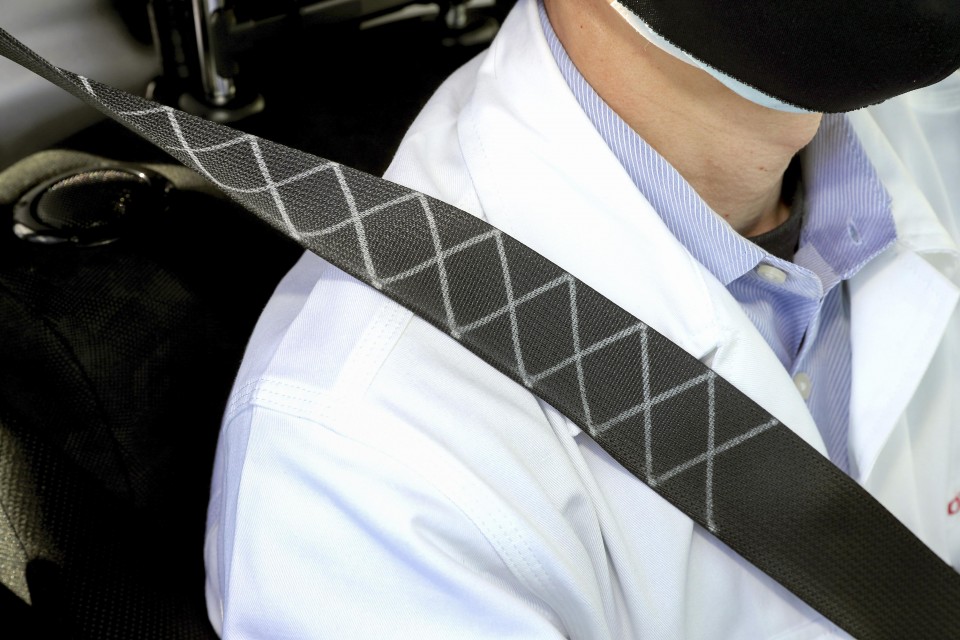 Supplied photo shows a seatbelt that automatically tightens to alert the driver of safety risks ahead of the car. (Kyodo)

Japan's automakers are stepping up their development of safety technologies, such as automatic braking systems, at a time when the country's population is rapidly aging. The auto industry has also seen increased competition to develop internet-connected cars.

The automatic seatbelt tightening system will warn the driver of at-risk pedestrians ahead of the car.

In another situation, if a driver tries to change lanes when another vehicle is approaching from behind, they will be presented with a 3D directional sound alert coming from in-vehicle speakers, Honda said.

Other safety functions include seats that vibrate to prevent a driver from dozing off and providing steering assistance in response to erratic driving, which is more likely among elderly drivers.

Pedestrians can also get smartphone alerts that will help them avoid becoming involved in dangerous traffic incidents.

Honda is developing another technology with mobile carrier SoftBank Corp. that connects drivers and other road users via telecommunication networks. Information gathered from in-vehicle or other cameras will be used to predict dangerous traffic situations with the help of AI, and people facing imminent danger will be alerted, the automaker said.

"For the realization of a collision-free society where all road users care for each other and the freedom of mobility becomes possible, we will further accelerate our industry-wide and public-private initiatives," Keiji Otsu, who heads the automaker's research arm Honda R&D Co., said in a press release.

Japan has seen the number of deaths from traffic accidents falling in recent years. The figure for 2020 came in at 2,839, the lowest since data became available in 1948, marking an 11.7 percent drop from a year earlier, according to the National Police Agency.

Among major Japanese automakers, Toyota Motor Corp. has developed a system that uses big data to avoid unwanted acceleration incidents caused by a driver who mistakenly steps on the gas pedal rather than the brake.