The number of geothermal power plants in Japan has quadrupled since the 2011 nuclear disaster in Fukushima, northeastern Japan, according to industry data.

Despite the surge, showed in the Thermal and Nuclear Power Engineering Society data, geothermal power accounts for only 0.3 percent of the country's total power output because many of the plants are of small scale. 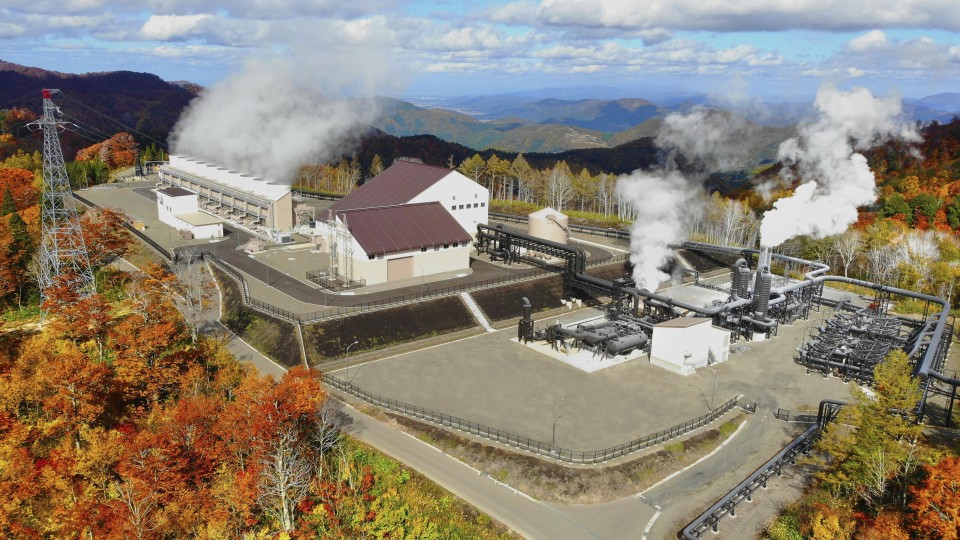 With world leaders calling for urgent action to rein in global warming at U.N. climate talks in Glasgow, Scotland, analysts say it is vital for Japan to accelerate the introduction of renewable energy.

Despite the abundance of geothermal resources in Japan, development of geothermal power has stagnated but it is now attracting renewed attention as a renewable energy source, with the government aiming to reduce greenhouse gas emissions by 46 percent from fiscal 2013 levels in fiscal 2030.

As part of the goal, the Cabinet approved a plan in October to double Japan's geothermal power facilities by 2030.

Geothermal power does not emit greenhouse gases, but it takes time and money to develop, and the national budget continued to decline until the 2011 disaster involving Tokyo Electric Power Company Holdings Inc.'s Fukushima Daiichi nuclear plant.

A geothermal plant generates electricity by extracting the steam heated by high-temperature magma deep underground through winzes to rotate turbines.

Geothermal power generation is more stable than wind or solar generation, which are vulnerable to weather changes.

Japan has the third-largest geothermal resources in the world after the United States and Indonesia, with the country possessing an amount equivalent to estimated generation of 23.47 million kilowatts.

The total output has remained unchanged at about 540,000 kilowatts as some large power plants have reduced output.

But development of small-scale power plants of 1,000 kilowatts or less has progressed in Kyushu and other areas, partly due to the country's feed-in tariff program for renewable energy.

In the Tohoku region of northeastern Japan, the 46,000-kw Wasabizawa geothermal power plant, the country's first large-scale power plant of 10,000 kw or more in 23 years, started operation in 2019.

In addition, 15,000 kilowatt-class geothermal power plants will start operation by 2030 in Iwate, Miyagi and Akita prefectures, bringing the total amount of power generation in the Tohoku region to about 325,000 kilowatts, equivalent to one small nuclear power reactor.

"It has a high operating rate and can play a major role" as a key energy source for the country, Tsuchiya said.