Both teams entered Friday's Game 3 of their leagues' Climax Series final stage needing only a tie to advance. 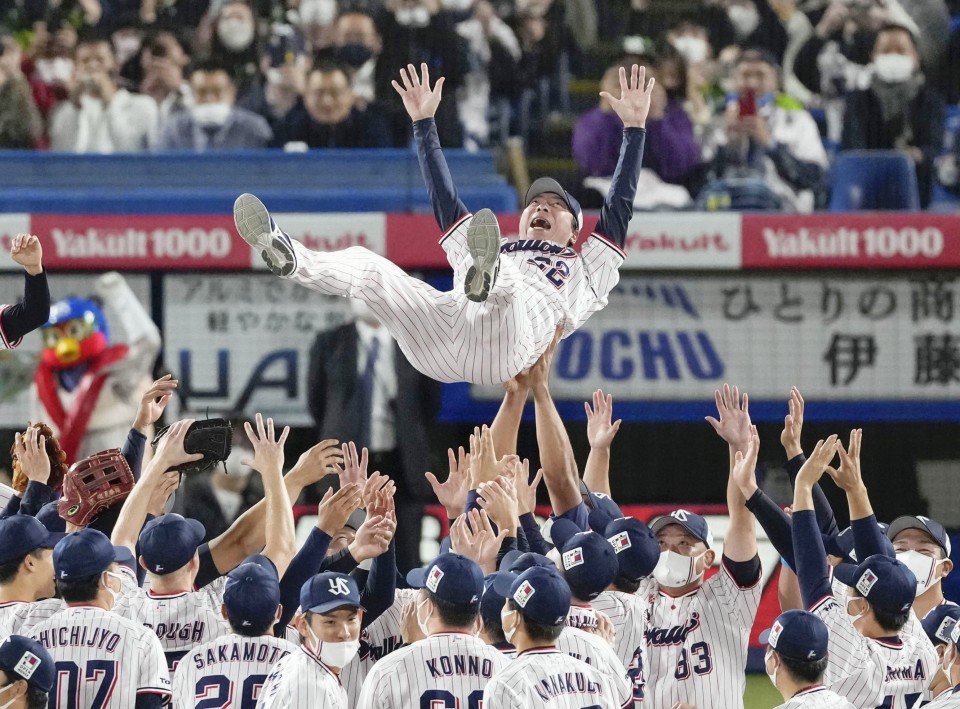 Yakult Swallows manager Shingo Takatsu (top) is tossed in the air by his players after the team advanced to the Japan Series in a 2-2 tie with the Yomiuri Giants in Game 3 of the final stage of the Central League Climax Series at Jingu Stadium in Tokyo on Nov. 12, 2021. (Kyodo) ==Kyodo

The Swallows held on to a 2-2 tie against the Yomiuri Giants, while the Buffaloes ended their series with the Lotte Marines in dramatic and unusual fashion when Yuya Oda's ninth-inning single ended the game in a 3-3 "sayonara" walk-off tie.

The Marines, who finished second in the regular season, took a 1-0 third-inning lead at Kyocera Dome Osaka after being shut out in the first two games.

Needing a win to stay alive in the best-of-seven series in which the league champ begins with one win and advances if the series ends in a tie, the Marines took an early lead in the seesaw game.

Shogo Nakamura put the Marines up 1-0 in the third, only for Yuma Mune's two-run sixth-inning homer to give the Buffaloes the lead. Lotte's Leonys Martin singled and re-tied the game in the seventh through some superb base running, before Nakamura homered in the eighth to make it 3-2. 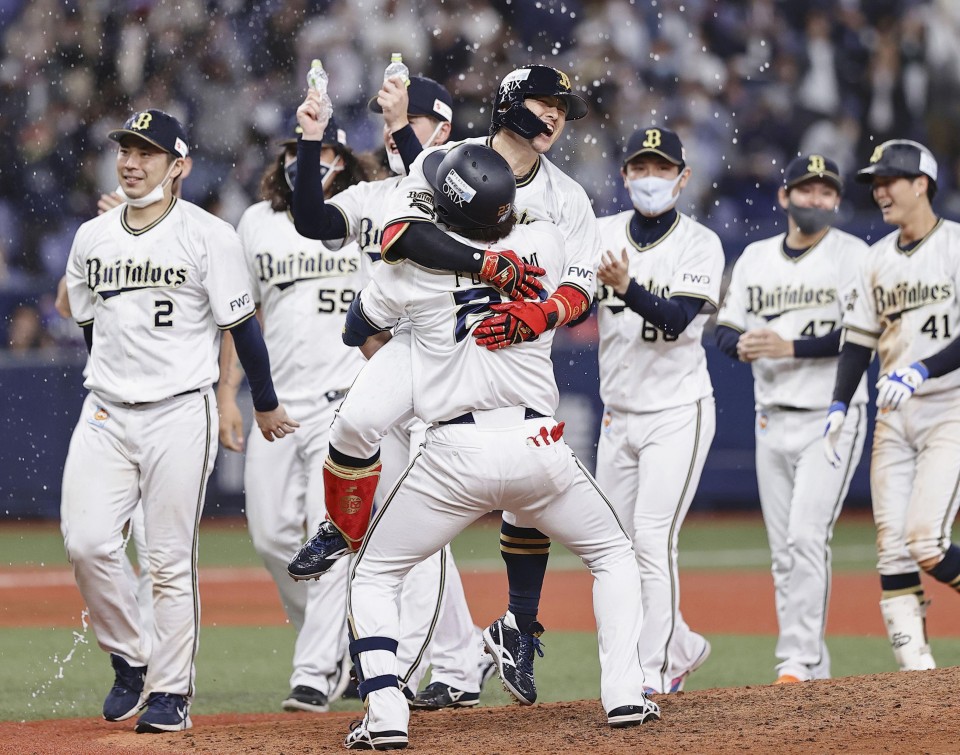 The Orix Buffaloes celebrate after advancing to the Japan Series with a 3-3 tie with the Lotte Marines in Game 3 of the final stage of the Pacific League Climax Series at Kyocera Dome Osaka on Nov. 12, 2021. (Kyodo) ==Kyodo

With PL saves leader Naoya Masuda on the mound for the Marines in the ninth, the Buffaloes appeared headed for a Game 4 on Saturday, but three straight no-out singles by Takahiro Okada, Ryoichi Adachi and Oda ended it.

"That about killed me," Orix manager Satoshi Nakajima said. "I trust the players, and it's great that they delivered the ultimate results."

"We won the pennant, and then booked a spot in the Japan Series. Now I want to take this all the way to the end."

The Buffaloes are headed to their franchise's first Japan Series since Ichiro Suzuki led the Orix BlueWave to Japan's pro baseball championship in 1996.

The Swallows will be making their first series appearance since 2015, and are looking for their first Japan championship since 2001. The two franchises have met twice before with Yakult beating the Hankyu Braves in 1978 and the BlueWave in 1995.

At Jingu Stadium, 39-year-old Norichika Aoki brought the Swallows from a run down with a two-out two-run seventh inning single.

"I was able to get a hit in the best possible situation," said Aoki who raised his right arm in triumph as the ball sailed over the infield.

Yomiuri, which finished third in the regular season and was also shut out in their first two final-stage games, wasted six superb innings from starter C.C. Mercedes.

The Giants managed to tie the game with a run in the eighth against the CL's top middle reliever, Noboru Shimizu, but left two runners on in the inning before Swallows closer Scott McGough recorded a 1-2-3 ninth to end it.

Swallows skipper Shingo Takatsu, who squared off as the Swallows closer in the 1995 Japan Series against Nakajima, then a catcher for the Orix BlueWave, was tossed in the air at his home park in a celebratory "doage" ceremony.

"Having the doage at Jingu Stadium achieved one of my dearest wishes," Takatsu said. "It was a hard fight, but through that I got a sense for the players, how strong they were and how much they grew."