Uniforms for about 28,000 volunteers at the Tokyo Olympics and Paralympics in the summer remain unused, a recent Kyodo News survey found, after many pulled out over scheduling conflicts due to the one-year postponement of the games and fears over the COVID-19 pandemic.

Municipalities surveyed are now struggling to find ways to put the 2020 Tokyo Games items, purchased with taxpayers money, to good use. More than 1.7 billion yen ($15 million) was spent in procuring the uniforms, with Japan preparing for at least 48,000 volunteers. 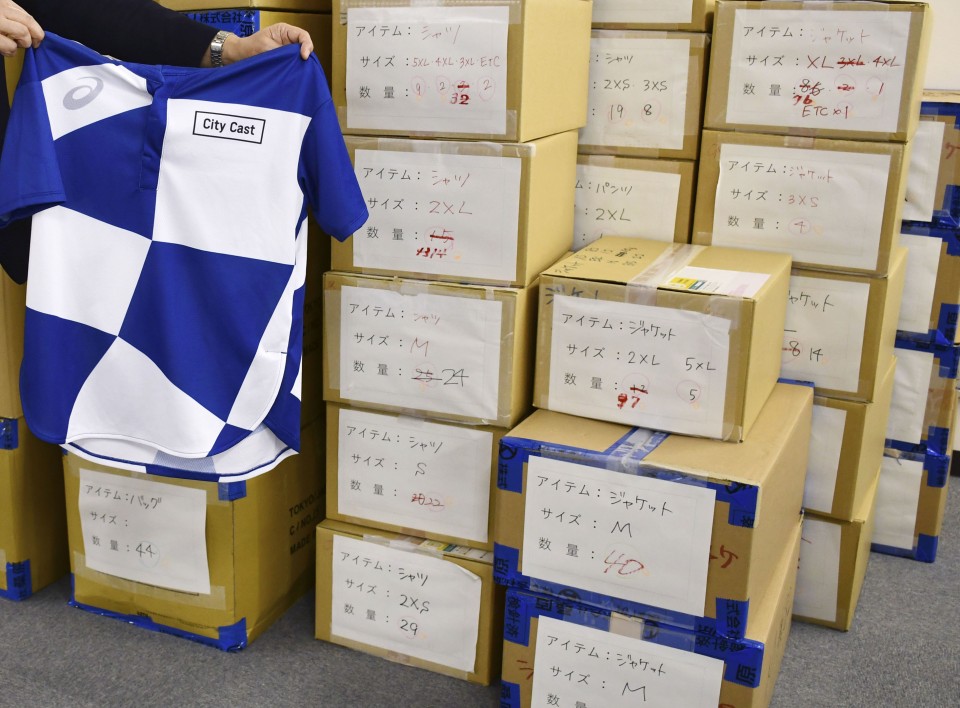 Photo shows cardboard boxes with unused uniforms for volunteers at the 2020 Tokyo Games, at an office in Yokohama, near Tokyo, on Oct. 1, 2021. (Kyodo)

The survey found that 11 municipalities, including Tokyo and nearby Chiba and Saitama prefectures, had the same problem with the unused uniforms, with Tokyo having the largest number.

The local governments had purchased the uniforms directly from sportswear maker Asics Corp., one of the sponsors of the games, with some involvement from the games' organizing committee.

Tokyo has about 21,000 pairs of shoes and 23,000 polo shirts left unused. Meanwhile, Saitama has unused uniform sets for around 2,000 people, followed by Chiba with at least 1,200. In Miyagi and Fukushima prefectures in northeastern Japan, there were some 1,000 and 800 unused uniform sets, respectively.

Fukushima had to store some uniforms at a private warehouse, which costs several tens of thousands of yen per month.

As the uniforms are inscribed with the games' emblems and subject to the strict rules of the organizing committee, some municipalities are asking the organizers to provide them with guidelines on how to deal with these items.

"We spent a lot of money and energy. We want the organizing committee to cooperate," said a Miyagi prefectural government official.

But the committee seems to be passing the buck, with an official saying that what to do with such uniforms is up to the municipalities that signed the sales contract with Asics.

Sapporo in northern Japan, for one, has donated approximately 100 of 145 uniforms to institutions such as schools for visually impaired people, who have held online interactive sessions with athletes of goalball in foreign countries. Goalball is a sport played by people with visual impairments.

Yuji Nakamura, a professor at Utsunomiya University in Tochigi Prefecture with expertise in sports administration, said it is important to be transparent in how the uniforms are to be used even if that may be a time-consuming task.

He called for exploring various solutions such as soliciting public opinion, as in the case of elementary school pupils across the nation who voted to decide the mascots for the games.