East Japan Railway Co. conducted a mock attack Monday on a bullet train in northeastern Japan to prepare staff for a possible incident like those seen recently on trains in Tokyo.

The simulated incident was attended by JR East's Sendai branch and local police. It involved a woman acting as an assailant who slashed a passenger and started a fire with a lighter after spraying liquid around the carriage. 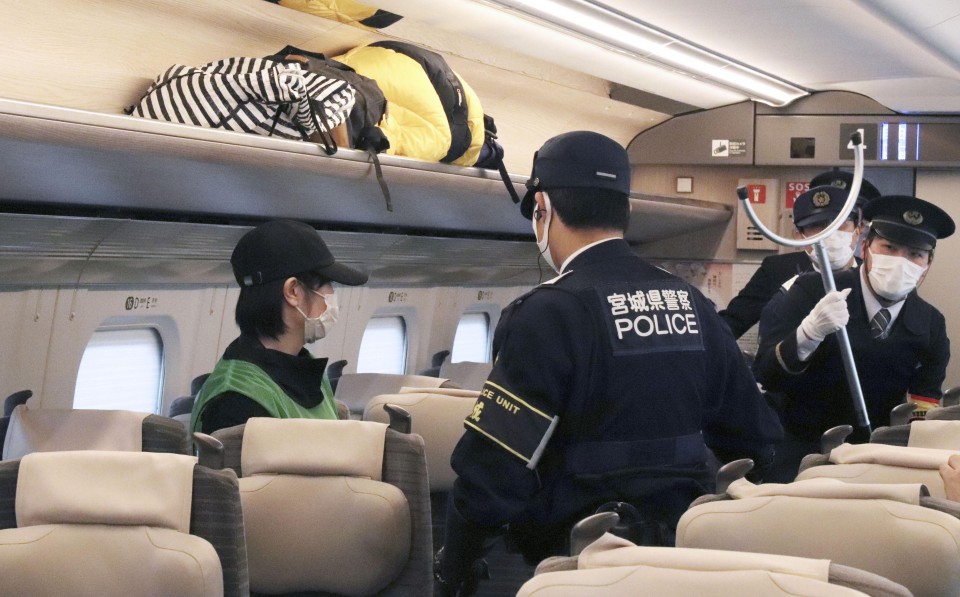 A mock attack is conducted on a bullet train at Shiroishi-Zao Station in Miyagi Prefecture on Nov. 29, 2021. (Kyodo)

An actual train car was used in the exercise conducted at Shiroishi-Zao station in Miyagi Prefecture.

JR East employees evacuated passengers, helped those who were injured and restrained the attacker while a conductor and security guard who responded bought time for police to arrive by engaging with the woman.

Employees were given limited information in advance about the scenario, the train operator said.

Following a series of violent incidents on trains recently, JR East has boosted security measures such as notifying passengers of the locations of emergency buttons and implementing patrols by security guards on the Tohoku Shinkansen bullet train line connecting the region with Tokyo.

The recent incidents include one in which a man stabbed a passenger and ignited a fire inside a limited express train on the Keio Line in Tokyo on the night of Halloween on Oct. 31.

The incident followed another knife attack in August this year when a man injured 10 passengers on an Odakyu Electric Railway commuter train in the capital.