The main opposition Constitutional Democratic Party of Japan elected its policy chief Kenta Izumi as its new leader on Tuesday, tasking the 47-year-old with reforming the party and leading it into the next summer's House of Councillors election after it suffered a humiliating election loss in October.

Izumi won in a runoff against veteran lawmaker Seiji Osaka, 62, in a four-way race to choose the successor to Yukio Edano, who stepped down to take responsibility for the CDPJ's loss in the general election against Prime Minister Fumio Kishida's ruling coalition. 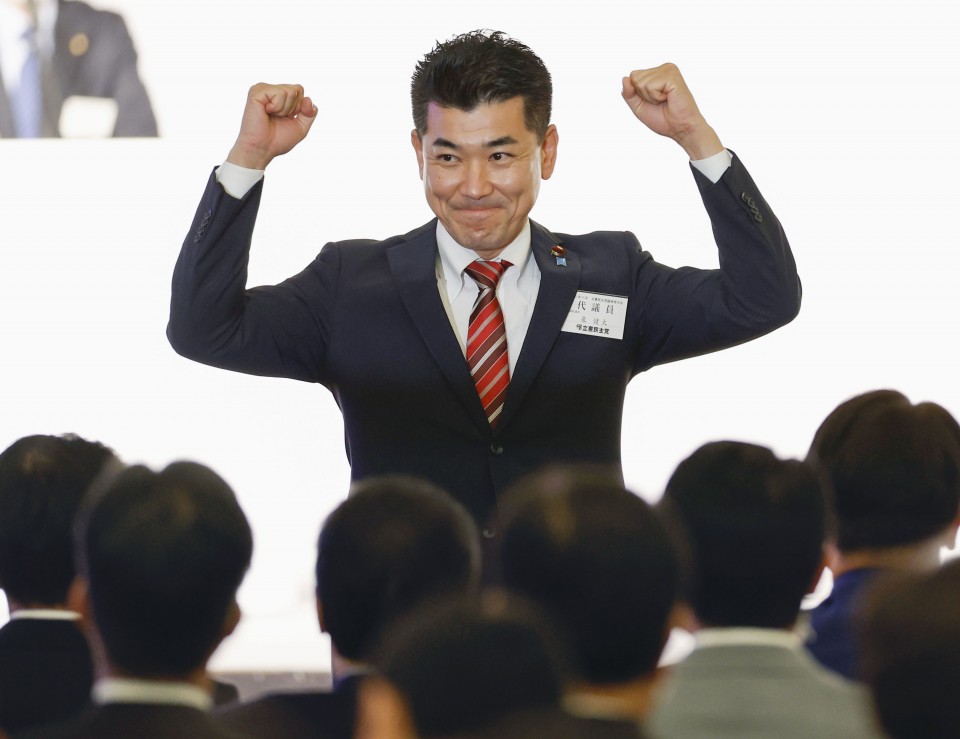 Kenta Izumi reacts after being elected new leader of the main opposition Constitutional Democratic Party of Japan in a party vote in Tokyo on Nov. 30, 2021. (Kyodo)

"I believe the top priority is rebuilding the party again," Izumi said at a press conference, vowing to better challenge Kishida's Liberal Democratic Party and its junior coalition partner Komeito in the upper house poll.

Izumi expressed willingness to cooperate with the Democratic Party for the People on topics the two parties agree on. But he suggested reviewing the building of an alliance with the Japanese Communist Party and other opposition parties as they did for the Oct. 31 House of Representatives election.

Despite election cooperation among the opposition camp, the CDPJ lost 14 lower house seats it held prior to the vote, leaving it with a total of 96, in comparison to the LDP's 261.

The CDPJ, a liberal party that has the backing of the Japanese Trade Union Confederation -- the country's largest labor organization known as Rengo -- was formed in September last year through the merger of the CDPJ, a part of the Democratic Party for the People and some independent groups.

Izumi, who belonged to the Democratic Party for the People before joining the CDPJ last year, said the two parties are regarded by the public as "close" and "thought to be like brothers."

"I will carry out people-centric politics," he said. "As a political party that works for the people, I would like to bring everyone's power together and start walking again."

Izumi said he intends to name Osaka -- who served as special adviser to prime ministers Yukio Hatoyama and Naoto Kan of the Democratic Party of Japan, the precursor of the CDPJ -- and Junya Ogawa and Chinami Nishimura, two other candidates defeated in the first round, to party executive posts if they agree.

Izumi said that including Nishimura, he would like to bring the ratio of women in the executive lineup to half.

CDPJ Diet members, totaling 140, and six candidates set to be endorsed by the party to run in the upper house election cast their ballots at an extraordinary party meeting, while local assembly and rank-and-file members voted online or by mail. 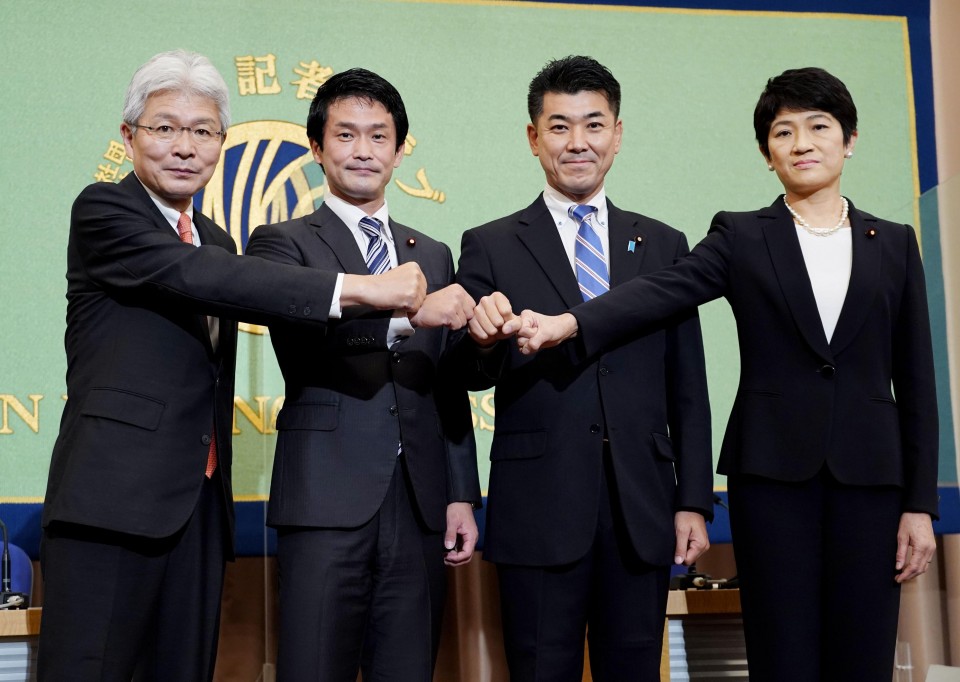 The four candidates for the leadership election of the largest opposition Constitutional Democratic Party of Japan, (from L) Seiji Osaka, Junya Ogawa, Kenta Izumi and Chinami Nishimura, pose for photos before their debate in Tokyo on Nov. 22, 2021. (Kyodo)

The CDPJ race was called and campaigning began on Nov. 19 as Edano announced his resignation as CDPJ leader after the party failed to make expected inroads in the lower house election.

The poor result raised questions about Edano's leadership and strategy of working with the JCP and other opposition parties to field single opposition candidates in hopes of better challenging candidates backed by the LDP-Komeito coalition.

Rengo has opposed the CDPJ joining hands with the JCP, saying in a statement after the election the CDPJ had "significant issues to resolve."

The JCP calls for scrapping the Japan-U.S. alliance, a far cry from the CDPJ's policy of deepening ties with Washington to ensure peace and stability in the Indo-Pacific region.

Izumi said he plans to hold talks with Rengo to clarify their stance, while noting there is no agreement of cooperation between the CDPJ and the JCP beyond the last election.

In the election, the LDP secured 261 seats, retaining a comfortable majority to effectively control all standing committees and steer the legislative process. Komeito went from 29 to 32 seats.