This year's Tokyo Olympics proved a grand entrance for dynamic pitcher Miu Goto, whose star performance at the age of 20 only whetted her appetite for bigger and better things.

Goto went from having no expectations of personal success for Japan to earning the win in three of Japan's five Olympic tournament victories as she racked up 22 strikeouts without allowing a run in 10-2/3 innings. She made her debut in the Olympics' opening competition, Japan's 8-1 win over Australia. 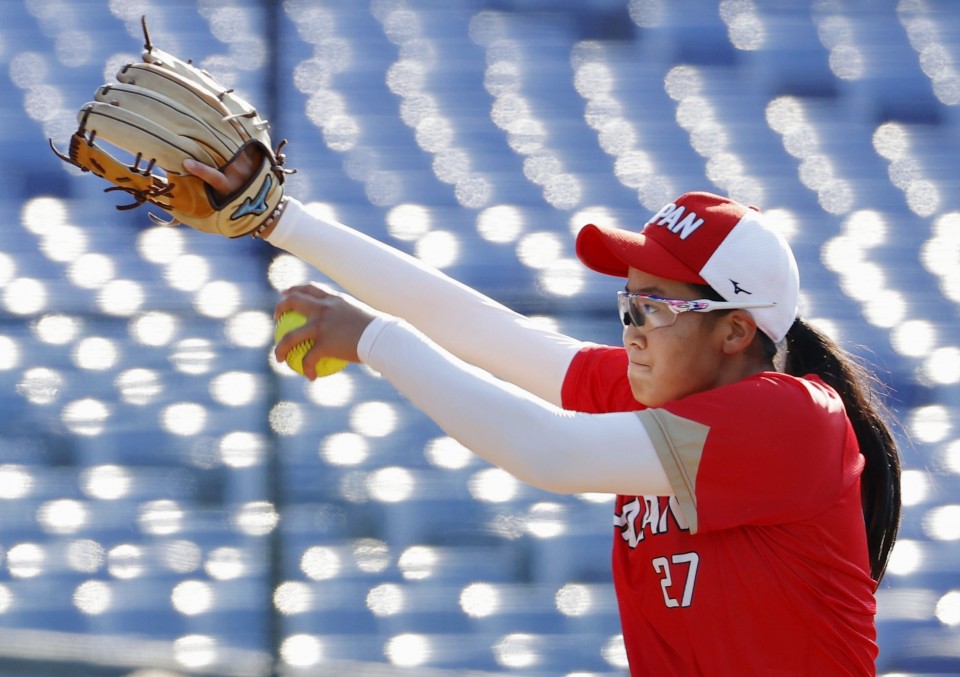 Japan's Miu Goto pitches against Canada in the opening round of the Tokyo Olympic softball tournament on July 25, 2021, at Yokohama baseball stadium near Tokyo. (Kyodo)(SELECTION) ==Kyodo

"Everyone had their eye on that (first game). I was unbelievably nervous," she told Kyodo News recently.

As the tournament went on, the lefty conquered her nerves and delivered a poised display of competitive fury.

"I thought that if I got nervous and panicked, that would upset my rhythm," Goto said. "But I pitched with the belief that no matter what, my teammates would bail me out and convinced we would win. If I did surrender a run, I believed my teammates would get those runs back. That added more to my conviction."

Before the Olympics, softball stories were largely about whether Japan's ace, 39-year-old right-hander Yukiko Ueno, could repeat her gold medal performance from 2008 in the previous Olympic softball tourney. Japan's team was older, and although Goto was already making a name for herself with the Japan Softball League's Toyota Red Terriers, she was still an outlier.

"When I was named to the national team, I didn't think there'd be a role for me," she said. "I felt a lot of anxiety, feeling maybe I'd be useless or be a hindrance to my teammates."

"Most of my teammates were over 30. I was the only 20-year-old. That alone made me extremely anxious."

Nerves aside, Goto came to camp with a solid foundation. In her three seasons with Toyota, she had been pushing herself to keep up with her American teammate, fellow lefty Monica Abbott, an Olympian in both 2008 and 2021, who led the Tokyo Games tourney in strikeouts and also earned three wins.

"Monica Abbott is physically very strong, and she's extremely stoic," Goto said. "She does an incredible amount of training. That's the biggest thing I've learned from her. There are so many cases where I see what she's doing and feel I have to do the same."

"It was the same at the Olympics. Monica put up these amazing results. I was thinking, 'Monica's giving it her all, so I have to, as well.' I think that I was able to do extremely well in these Olympics because of Monica."

When Goto arrived at national team training camp, Japan manager Reika Utsugi simply encouraged her to be herself.

"She (Utsugi) said, 'If you just bring those qualities that come with your youth, you'll be fine.' That made it easy just do that," Goto said. "I surprised myself. I went all out to keep up. I was going to keep up with the older players if it killed me. In retrospect, my timing was perfect." 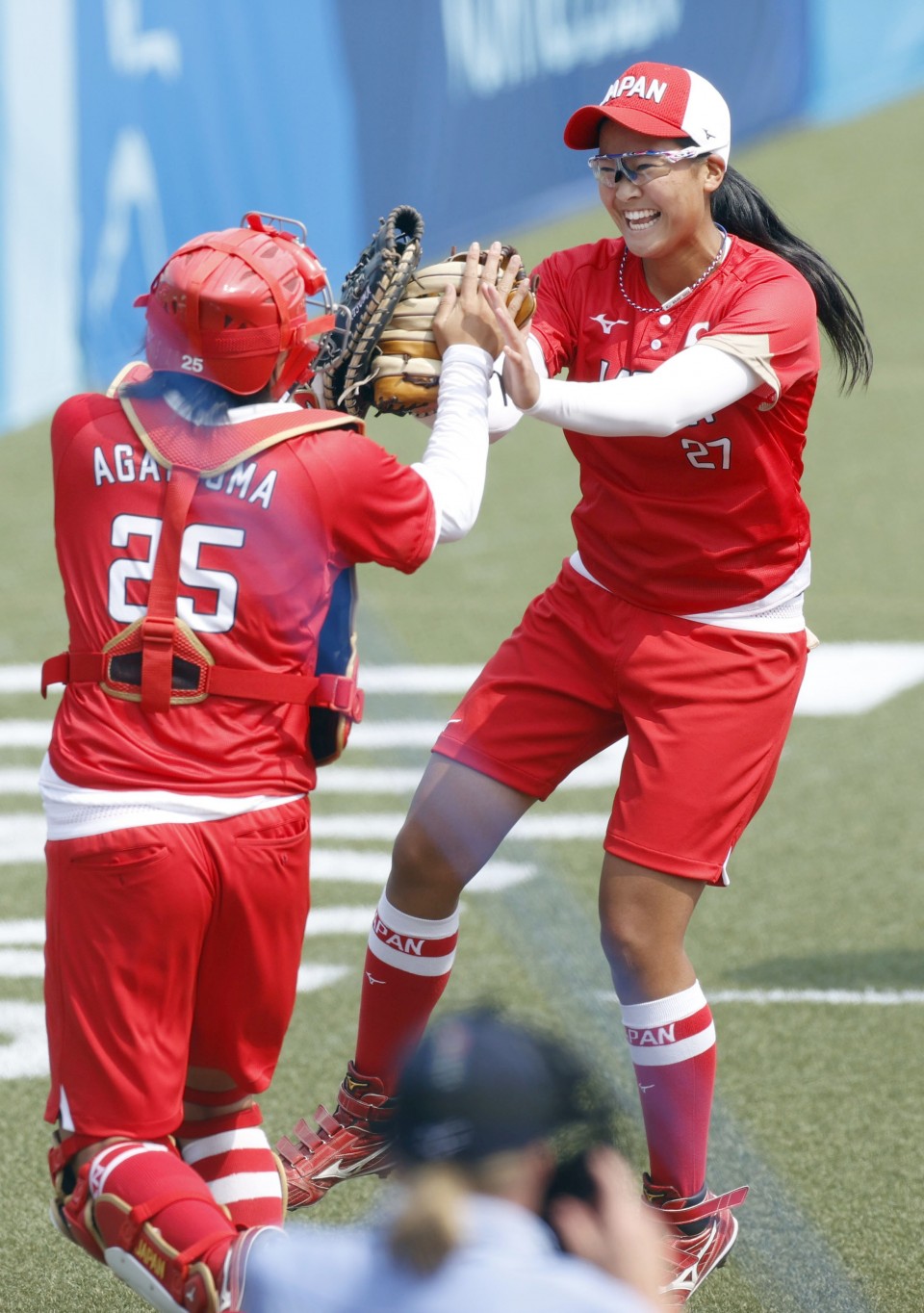 Japanese pitcher Miu Goto (R) celebrates with catcher Haruka Agatsuma after getting out of a seventh-inning jam in her relief appearance against Mexico in the opening round of the Tokyo Olympic softball tournament at Fukushima Azuma stadium in Fukushima, northeastern Japan, on July 22, 2021. (Kyodo)(SELECTION) ==Kyodo

"Mentally I got really strong. I believe in myself more. I brought my thoughts with me and they weren't all positive. But because I had those harsh feelings in mind and still competed (at that level), I felt I grew a lot."

In the gold medal game, Goto almost let Japan's 2-0 lead slip away in the sixth inning. With two on and one out, she was saved by a spectacular double play. Ueno, who had pitched the first five innings, returned for the seventh and secured her second gold medal and Goto's first.

The Olympics, Goto said, gave Japanese softball a boost, and motivated her to be a part of its future growth.

"There are many more fans. Because we were allowed to put the spotlight on softball, since the Olympics more different people have come to Japan Softball League games," Goto said. "It's so different from before."

"Does winning a gold medal change your life? I've come to feel I want to do things going forward that might earn me recognition as one who propels the Japanese softball world, or perhaps carries it on her shoulders," Goto said.

One specific item on her agenda is finally getting to savor the real feeling of the Olympics. With softball not on the agenda for Paris in 2024, 2028 is being eyed for a comeback when the games will be held in Los Angeles.

"Without fans it was complicated," Goto said. "It didn't feel like the Olympics. With no fans, playing in silence, it was lacking something in my opinion. If it had been like normal, the fans would be so noisy. So I want to savor that once more for real. I want to go to America and play good games."