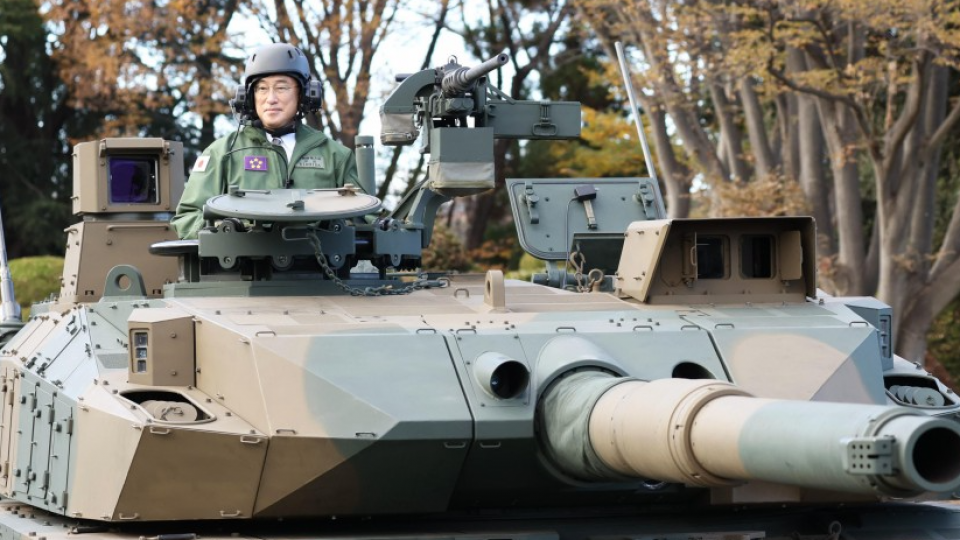 Japanese Prime Minister Fumio Kishida takes a ride in a tank during his visit to the Ground Self-Defense Force's Asaka base straddling Tokyo and Saitama Prefecture on Nov. 27, 2021. (Pool photo) (Kyodo) ==Kyodo

LONDON - A new COVID-19 strain detected in South Africa is spreading in Europe as the first cases of the highly infectious variant were confirmed Saturday in Britain, Germany and Italy, prompting many countries inside and outside the region to tighten border controls.

The three countries follow Belgium, the Netherlands, Denmark and several other nations and regions outside South Africa in reporting the first cases or suspected infections of the Omicron variant.

TOKYO - The Japanese government was aware that a portion of the seabed at the planned relocation site for a U.S. military base in Okinawa, southern Japan, was weak in 2015, three years before controversial landfill work got under way there, official documents showed Saturday.

A geological survey conducted by a contractor found the possibility of the ground sinking over the long term due to a weak seabed area. However, the government did not officially acknowledge the existence of the soft earth, which required reinforcement work, until 2019.

The state government said it had confirmed that two travelers who arrived in Sydney on Saturday from southern Africa were infected with the variant.

Arrangements are being made for Japan's Foreign Minister Yoshimasa Hayashi and Defense Minister Nobuo Kishi to visit the United States for the so-called two-plus-two meeting with U.S. Secretary of State Antony Blinken and Defense Secretary Lloyd Austin, the sources said.

BANGKOK - The United States is planning to host an in-person summit of President Joe Biden and leaders of the Association of Southeast Asian Nations in Washington in January, ASEAN sources have said.

The summit would be the first face-to-face meeting of Biden and ASEAN leaders since he took office in January this year, as Washington is emphasizing its commitment to the region amid China's growing clout.

TOKYO - Uniforms for about 28,000 volunteers at the Tokyo Olympics and Paralympics in the summer remain unused, a recent Kyodo News survey found, after many pulled out over scheduling conflicts due to the one-year postponement of the games and fears over the COVID-19 pandemic.

Municipalities surveyed are now struggling to find ways to put the 2020 Tokyo Games items, purchased with taxpayers money, to good use. More than 1.7 billion yen ($15 million) was spent in procuring the uniforms, with Japan preparing for at least 48,000 volunteers.

Kobayashi beat Slovenian Anze Lanisek after racking up a total of 324.5 points on a first jump of 138.5 meters that put him 1.4 points behind Lanisek and a second of 143 meters to claim his first win of the season.

TOKYO - Over 60 percent of respondents to a recent online survey in Japan said they believe work-related get-togethers for drinking are "unnecessary," as the COVID-19 pandemic has reduced reliance on alcohol to deepen relationships.

Those who shun so-called "nominication" -- a hybrid of the Japanese word for "drink" and "communication" -- that often signifies work colleagues meeting up over drinks, overtook supporters of the practice for the first time since Nippon Life Insurance Co. began the annual survey in 2017.