Kishida is set to relaunch his Cabinet after parliament convenes a special session on Nov. 10 and is expected to choose Motegi's replacement as foreign minister by then. One candidate is former education minister Yoshimasa Hayashi, according to a person familiar with the matter. 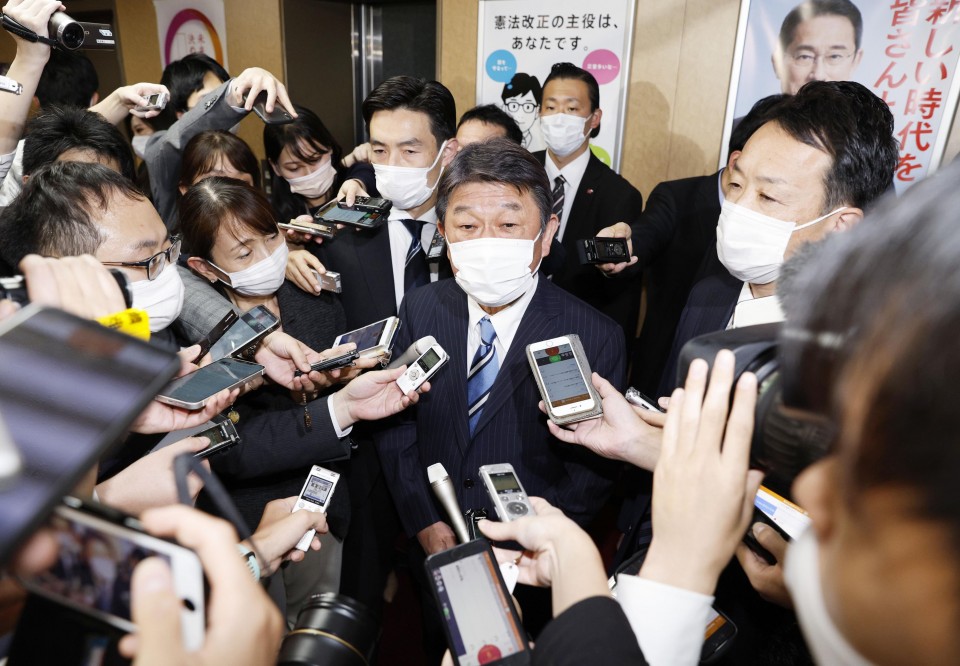 Motegi, who has been foreign minister since September 2019, said Kishida tasked him with implementing LDP reforms and drawing up a stimulus package to prop up the coronavirus-hit economy.

"I think it's important that I make sure we can honor the trust invested in us by the people," the 66-year-old told reporters after meeting with the prime minister at the LDP's headquarters in Tokyo and accepting the appointment.

The LDP will make the appointment official at a General Council meeting on Thursday, after Kishida returns from a U.N. conference on climate change in Glasgow, Scotland.

Motegi's most senior LDP post to date has been chairman of the Policy Research Council, a role he served in twice. He is the de facto head of one of the seven major intraparty factions and backed Kishida in the LDP leadership race in September.

A graduate of Harvard University's John F. Kennedy School of Government, Motegi worked as a political reporter at the Yomiuri Shimbun daily and as a consultant at McKinsey & Co. before being elected to the House of Representatives in 1993.

He was easily re-elected in his constituency in Tochigi Prefecture in the election for the 465-member lower house, in which the LDP retained a majority.

Amari lost his single-member district in Kanagawa Prefecture to Hideshi Futori of the main opposition Constitutional Democratic Party of Japan but managed to secure a seat through proportional representation.

The 72-year-old resigned as economic and fiscal policy minister in January 2016 amid graft allegations, but opposition lawmakers have continued to criticize him for failing to provide a proper explanation.