Japanese Prime Minister Fumio Kishida and U.S. President Joe Biden on Tuesday agreed in their first in-person talks to enhance the bilateral alliance and closely cooperate toward a free and open Indo-Pacific amid China's assertiveness in the region.

Kishida also agreed to forge closer ties with his counterparts from Britain, Australia and Vietnam on the sidelines of the U.N. climate summit, all three countries which Tokyo views as key partners in advancing a free and open region. 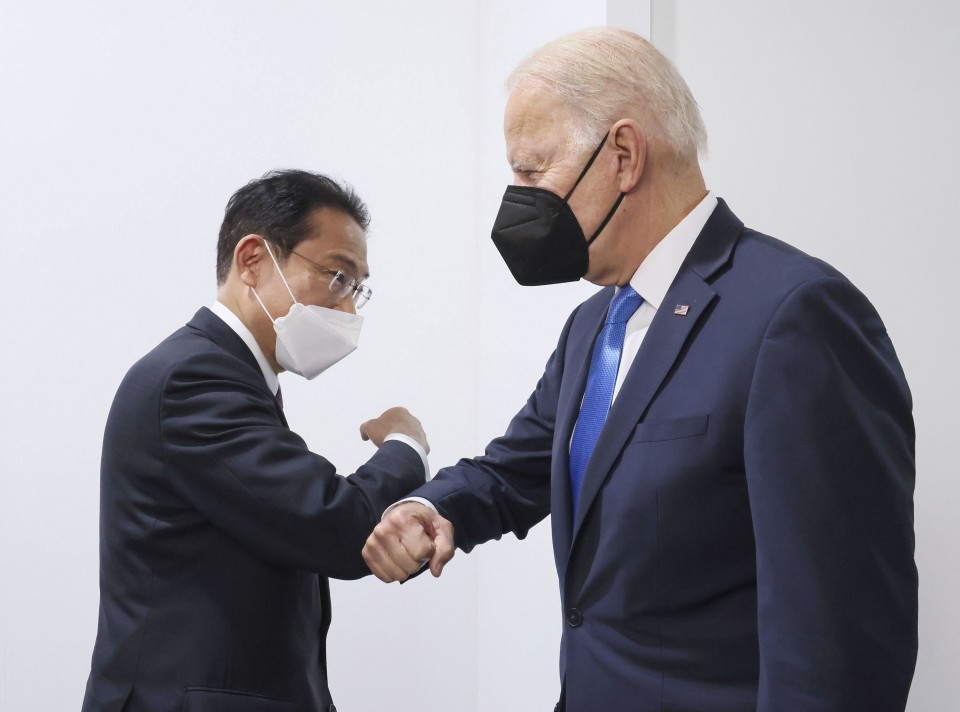 The flurry of diplomatic activity took place during Kishida's brief first foreign trip as the Japanese leader. He departed following Sunday's general election in which his governing coalition won a comfortable majority in the House of Representatives.

After arriving in the Scottish city of Glasgow earlier Tuesday, Kishida had a brief conversation with Biden, according to the Japanese Foreign Ministry.

The two agreed to continue to jointly deal with climate change issues as well as regional issues, apparently mindful of the challenges and threats posed by China and North Korea's nuclear and missile programs.

Kishida told reporters later in the day he agreed with Biden to meet again at the earliest date possible, which could be later this year, to have more "thorough" discussions.

The former long-serving foreign minister already had phone talks with Biden after being elected prime minister by parliament last month, but it was the first time that the two met in person while serving in their current positions.

Kishida, meanwhile, affirmed with British Prime Minister Boris Johnson their cooperation toward promoting a free and open Indo-Pacific and agreed to accelerate talks for a deal to improve legal and other procedures to facilitate joint exercises between their defense forces.

The negotiations for a Reciprocal Access Agreement come as Britain has been stepping up its engagement in the region, partly propelled by Beijing's undermining of democracy and human rights in Hong Kong, a former British colony.

As members of the Quad group that also involves the United States and India, Kishida and Australian Prime Minister Scott Morrison agreed on the importance of both bilateral and quadrilateral ties in pursuing a free and open region.

During talks with Vietnamese Prime Minister Pham Minh Chinh, Kishida expressed his strong opposition to unilateral attempts to change the status quo in the East and South China seas.

China has conflicting territorial claims with four members of the Association of Southeast Asian Nations -- Brunei, Malaysia, the Philippines and Vietnam -- as well as Taiwan in the South China Sea, a strategic waterway through which more than one-third of global trade passes.

Beijing also claims the Senkaku Islands, a group of uninhabited islets in the East China Sea administered by Japan. China has frequently sent its coast guard ships near the chain of islets, which it calls Diaoyu.

Kishida and his Vietnamese counterpart agreed to cooperate over supply chain issues, given that many Japanese companies have production and other corporate bases in the Southeast Asian country, and to accelerate talks to promote Japanese defense exports, according to the Japanese Foreign Ministry.