A man arrested following a knife attack on a Tokyo train on Halloween night was served a fresh arrest warrant Monday on suspicion of attempted murder and arson, police said.

Kyota Hattori, 25, who wore a costume resembling that of the Batman villain the Joker during the attack, is suspected of trying to kill passengers, including a 60-year-old woman, by sprinkling approximately 3 liters of oil around the train and igniting it, the police said. 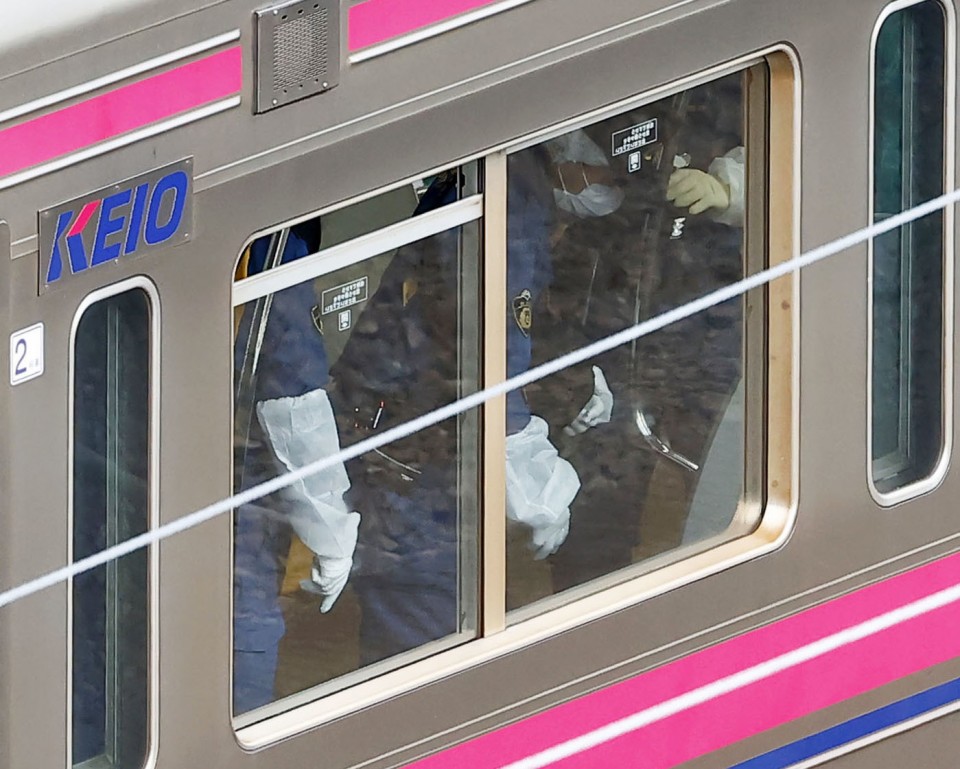 Police officers inspect a Keio Line train in Tokyo's Inagi on Nov. 1, 2021, a day after a man was arrested in a knife and arson attack on the train. (Kyodo)

The police quoted Hattori as saying, "I executed a plan to kill many people in an effective and efficient manner so that I will get the death penalty."

He was first arrested on suspicion of attempted murder of a 72-year-old man after allegedly stabbing him in the chest on Oct. 31 on the limited express train.

But prosecutors on Monday suspended their decision on whether to charge Hattori over the allegation.

The man had fallen into critical condition and was unconscious but later recovered.

The floor of the Keio Line train and seats were burned in the attack that occurred around 8 p.m., but none of the 15 other passengers in proximity sustained burns or serious injuries as they fled to other train cars.

According to investigative sources, Hattori has told police that he was not doing well at work and not getting along with people.

"I thought I would get the death penalty if I killed two or more," he was quoted by the sources as telling investigators.

Videos recorded by people on the train showed passengers running to escape a large blaze in one of the carriages.

In June, Hattori quit a call center in Fukuoka at which he had worked for about three years following a problem with a customer. After leaving the southwestern Japanese city in July, he stayed in Kobe and Nagoya, the sources said.

He told investigators he targeted Halloween as the trains would be busy with passengers and that his act was inspired by another knife attack in August in which a man splashed cooking oil on an Odakyu Electric Railway commuter train. However, in that incident, the oil failed to ignite.

He was living in a hotel in Hachioji in the west of the capital from around late September and purchased a costume similar to the one worn by the Joker and some 20 cans of oil, the sources said.

The incident, which caused panic and sent passengers scrambling through windows of the train when its doors were not immediately opened, took place on a 10-car service headed to Shinjuku, a busy station in central Tokyo, from Hachioji.