Prime Minister Fumio Kishida on Thursday agreed with Adm. John Aquilino, commander of the U.S. Indo-Pacific Command, to strengthen the Japan-U.S. alliance and work toward a free and open Indo-Pacific amid China's rise and North Korea's missile threats.

During the roughly 20-minute meeting, which was held a day after Kishida was re-elected prime minister, the two shared concerns regarding China's unilateral attempts to alter the status quo in the region and exchanged views on North Korea's test-firing of missiles, according to the Japanese government. 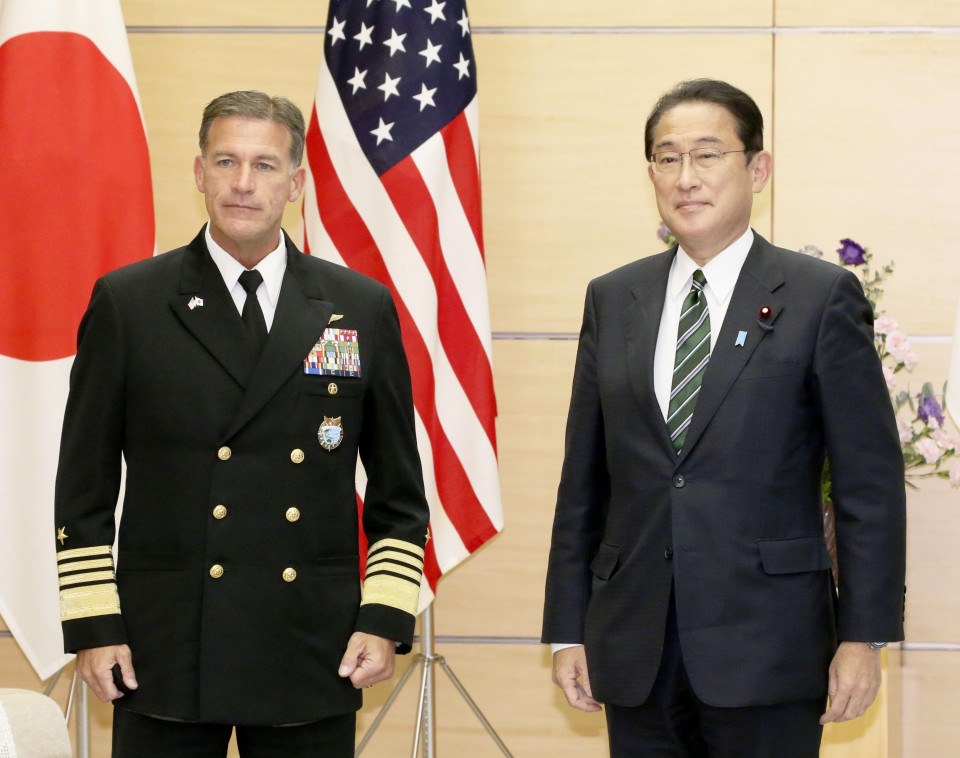 "By further enhancing cooperation between Japan and the United States, I would like to realize a free and open Indo-Pacific," Kishida said at the outset of the meeting.

Aquilino responded he is committed to "deliver a free and open Indo-Pacific, and peace and stability and prosperity for the region."

The commander also met Thursday with Defense Minister Nobuo Kishi and new Foreign Minister Yoshimasa Hayashi, who assumed the post the previous day as Kishida formed his second Cabinet after being re-elected as Japan's leader by parliament.

Hayashi called for strengthening deterrence under the bilateral alliance.

Kishi said during their meeting the "security environment surrounding Japan is increasingly severe," referring to the China and North Korea situations.

When Kishi and Aquilino last met in June, they agreed on the importance of peace and stability across the Taiwan Strait, according to the Japanese government.

Aquilino had warned the threat of China's aggression toward Taiwan may be more imminent than expected, stressing the importance of the U.S.-Japan alliance in maintaining regional security.