The victory of the Liberal Democratic Party and its coalition partner Komeito in the election for the 465-seat House of Representatives could see the benchmark Nikkei index retesting the 30,000 mark after dipping below the line in late September, analysts said. 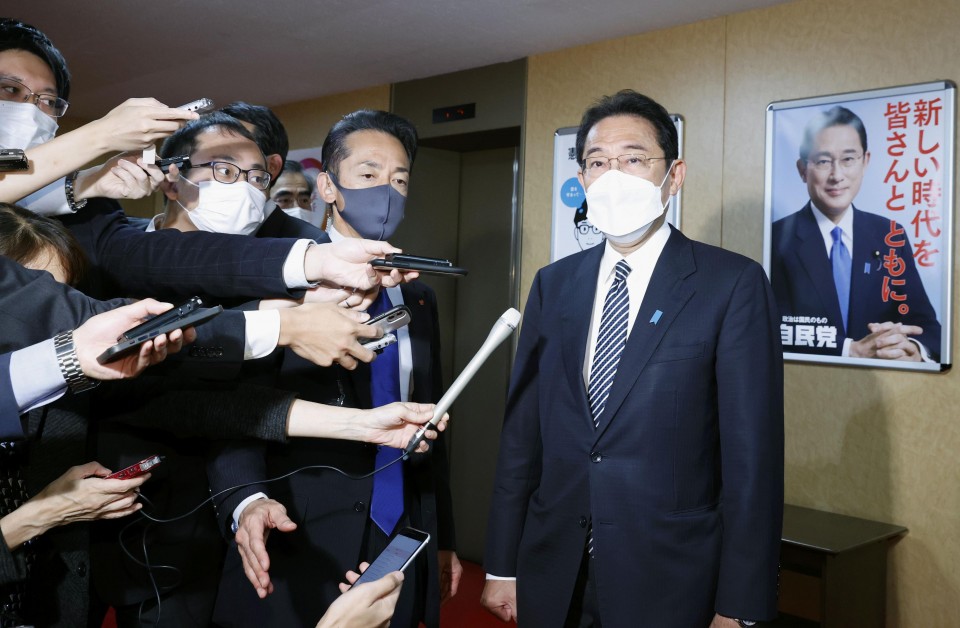 The LDP lost 15 of the 276 seats it held prior to the election, but brokers said the setback had already been factored in after media polls. The ruling party won 261 seats, including two independents it endorsed after the election.

Kishida had pledged that if his government remained in power it would compile a stimulus package worth "tens of trillions of yen" to jump-start the slow recovery of the economy from the coronavirus pandemic.

The prime minister said Monday at a press conference he will draw up stimulus measures by mid-November to prop up the coronavirus-hit economy.

"Foreign investors are looking with great interest at Japan's politics as a key trading cue," said Masahiro Ichikawa, chief market strategist at Sumitomo Mitsui DS Asset Management Co. If the Kishida administration becomes a long-term government, it "could leave them as major buyers of Japanese stocks."

Market participants had been concerned that the Kishida government might be short-lived after some media polls before the election showed his party could struggle to retain a majority in the more powerful lower chamber of parliament.

The ruling party lost one of two House of Councillors by-elections on Oct. 24, seen as a prelude to the general election.

The ruling coalition won a combined 293 seats, more than 261 seats in the powerful chamber, enough to allow the bloc to control all lower house standing committees.

The Tokyo market had been on a downtrend since Kishida became LDP leader in late September and took office Oct. 4, weighed down by the debt crisis at China's Evergrande Group and rising long-term U.S. Treasury yields coupled with higher oil prices.

Kishida's plan to review the capital gains tax as part of his economic policy also added pressure on the market, though he later said the review would not take place anytime soon, easing investor concerns.

On the foreign exchange market, the dollar recently climbed closer to 115 yen, a level not seen since 2017, driven by higher U.S. Treasury yields on a divergence in the monetary policy between U.S. and Japanese central banks. The U.S. Federal Reserve is expected to start reducing massive asset purchases while the Bank of Japan continues with its easing policy.

The results of the lower house election are not likely to change the firmer tone of the U.S. currency against the yen, dealers said. A weaker yen raises the prices of imports including oil, squeezing the profitability of Japanese companies.

Now that the election uncertainty has been removed, investors' focus will shift to the prospect of surging energy prices and U.S. inflation among other factors, analysts said.

Market participants expect the U.S. central bank to reduce its asset purchases at its next two-day meeting through Wednesday. The market will then be watching for the start of U.S. interest rate increases to address rising inflation.

"The biggest issue in next year's U.S. midterm elections will be inflation and the focus will be on how to keep it under control," said Yutaka Miura, senior technical analyst at Mizuho Securities Co.

The outlook for raising the U.S. debt ceiling could also drive the market down if Congress finds it difficult to reach a deal to continue funding the government after a debt ceiling extension to avert a default ends on Dec. 3.

Miura said the fate of Evergrande Group could also rattle the Tokyo market, depending on the impact on the Chinese economy.