Two groups of lawyers filed lawsuits across the country Monday seeking to void the results and conduct a rerun of the previous day's lower house election due to vote weight disparities created by Japan's rural-urban population imbalance.

The disparity in the weight of a single vote between the most and least populated single-seat constituencies stood at 2.08-fold, widening from 1.98-fold in the previous House of Representatives election in 2017, when electoral districts were rezoned. 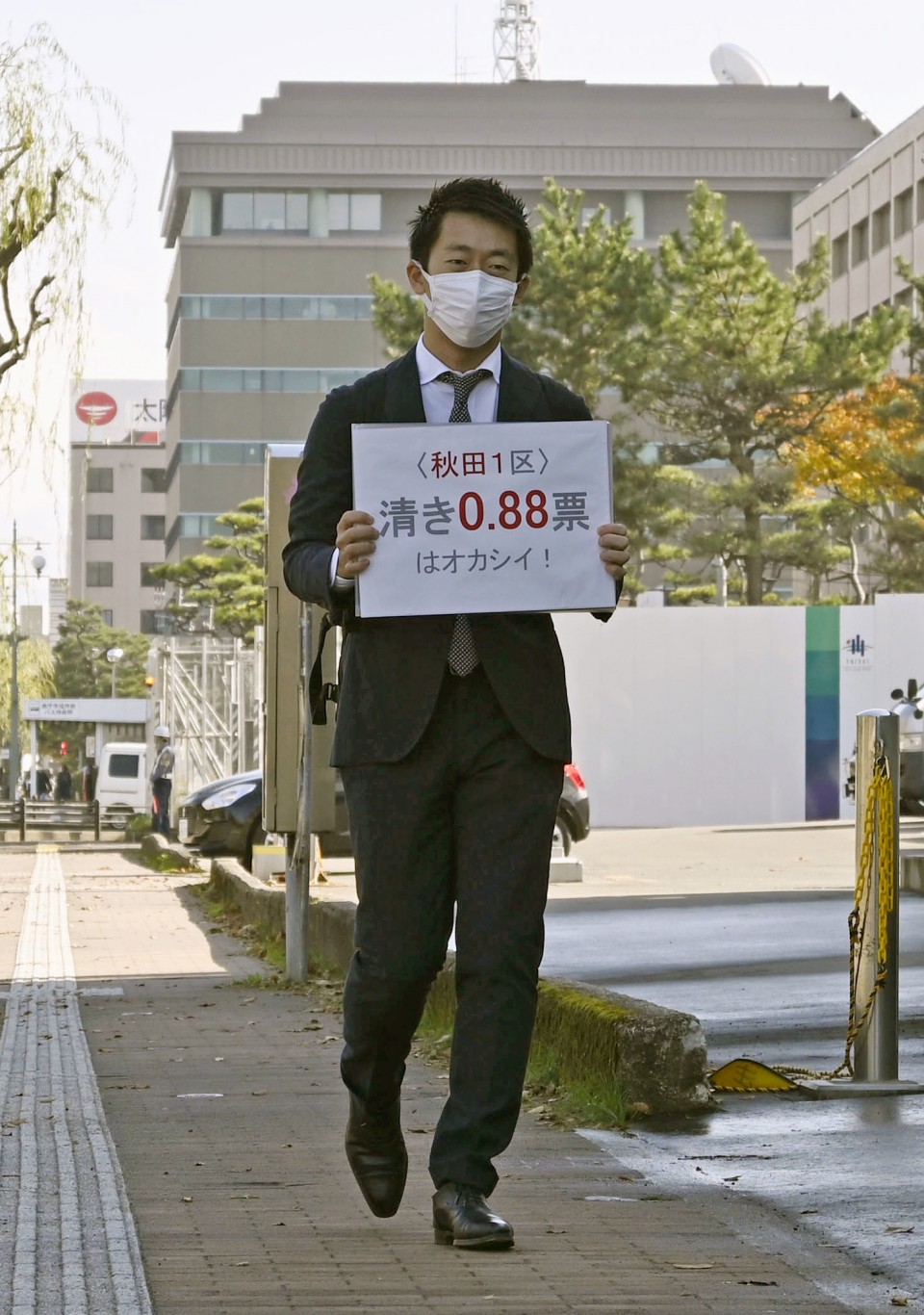 A lawyer heads to the Sendai High Court's Akita branch in Akita on Nov. 1, 2021, to file a lawsuit over vote weight disparities create by Japan's rural-urban population imbalance. (Kyodo)

The Supreme Court has found levels above 2.0 constitutionally problematic, but it has never ruled to nullify an election result.

The vote weight disparities in all of the 289 single-seat electoral districts will be challenged.

A group of lawyers led by Hidetoshi Masunaga, which filed lawsuits with 14 high courts and their branches, said all of the rulings may be handed down next spring at the earliest, and the top court may give a decision by March 2023.

"It is the court's role to correct (the disparities). An unconstitutional judgment can prompt the Diet to take action," Makoto Ito, a lawyer in Masunaga's group, said in a news conference.

Lawyer Kazuaki Hasumi, who belongs to the other group, told a press conference after filing a lawsuit with the Hiroshima High Court that addressing vote weight disparities is the starting point for Prime Minister Fumio Kishida to deliver on his promise of "listening to people's voices."

According to government data, the highest disparity in the weight of votes based on the number of eligible voters as of Oct. 31 was 2.08-fold between Tottori Prefecture's No. 1 constituency in southwestern Japan with 230,959 voters and Tokyo's No. 13 district with 480,247 voters.

The Supreme Court ruled in December 2018 that the vote weight disparity in the 2017 race was constitutional.

To address the problem, the Diet enacted legislation in May 2016 to redraw the boundaries of electoral districts to better reflect the ratio of the population based on preliminary figures from the 2020 national census. The new zoning will be introduced in 2022 or later and until then one seat each will be slashed from six prefectures.