Yokozuna Terunofuji and ozeki Takakeisho stayed undefeated Sunday to start the second week of the Kyushu Grand Sumo Tournament in a two-way tie for the lead.

Lone grand champion Terunofuji was far too strong for No. 4 maegashira Endo, while Takakeisho made a narrow escape against towering komusubi Ichinojo, winning by disqualification. 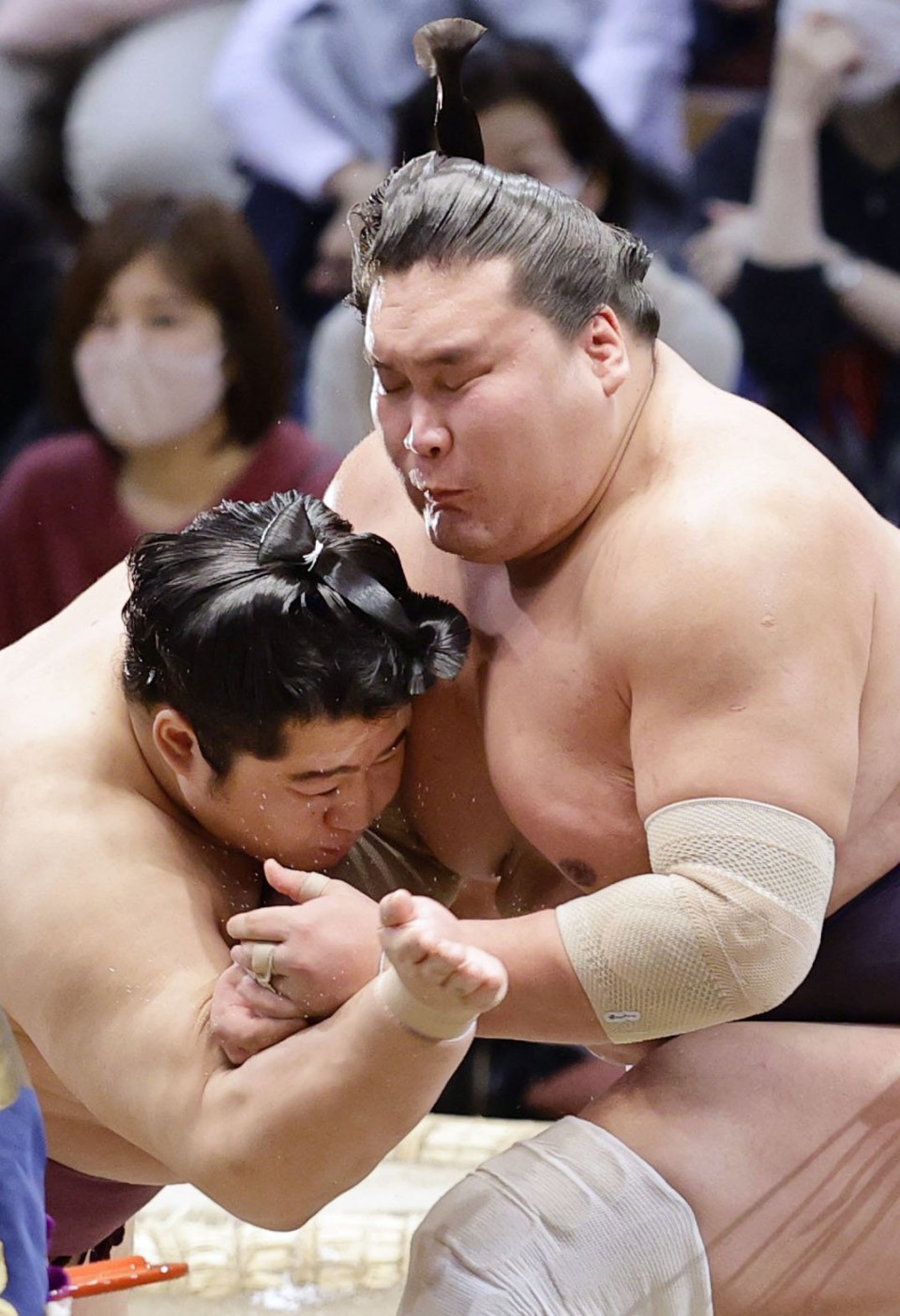 Sekiwake Mitakeumi and No. 15 Abi remained one win off the lead at 7-1 by winning their respective bouts on Day 8 of the 15-day meet at Fukuoka Kokusai Center.

After absorbing a strong opening charge from Endo (4-4), Terunofuji pushed the former komusubi straight back and out to clinch a winning record in his first tournament as sumo's sole active yokozuna following Hakuho's retirement in September.

Winner of three of the past four grand tournaments, the Mongolian-born titan is gunning for his sixth career Emperor's Cup.

Normally reliant on his explosive opening charge, Takakeisho was dragged into an unwanted war of attrition by Ichinojo after struggling to budge the 1.9-meter, 206-kilogram giant.

Following a long stalemate, Ichinojo (3-5) appeared to win by lifting Takakeisho by the belt and flinging him out, but he was judged to have illegally grabbed the ozeki's hair in the process.

Ozeki Shodai (5-3) made short work of No. 3 Myogiryu (2-6), thrusting him to the clay for a second straight win following consecutive losses that all but sank his title hopes.

Mitakeumi easily overpowered No. 3 Okinoumi (2-6), driving him straight out after the pair locked up in the middle.

The Nagano Prefecture native is bidding to win a third makuuchi division crown while also strengthening his case for promotion to ozeki.

Back in the top division for the first time since his three-meet ban for breaking coronavirus safety rules in July 2020, former komusubi Abi (7-1) continued his pursuit of a maiden Emperor's Cup by forcing out No. 9 Hidenoumi (5-3).

Battling to keep his place at sekiwake, Meisei improved to 4-4 by crushing out No. 4 Takarafuji (3-5). Having fended off an inside grip attempt, he marched the maegashira back and toppled him at the edge.

Following a rough first week, Mongolian komusubi Kiribayama (2-6) downed No. 1 Daieisho (3-5) to keep alive his hopes of a winning record in his debut among the three "sanyaku" ranks below yokozuna.

Sumo: Terunofuji one of unbeaten trio in Kyushu tourney