A man was arrested on suspicion of attempting to start a fire on a shinkansen bullet train in southwestern Japan on Monday morning, in an incident that appeared to be inspired by a recent arson attack on a train in Tokyo on Halloween, police said.

Kiyoshi Miyake, 69, from Fukuoka was arrested at the scene, they said. No injuries were reported on the train from Hiroshima bound for Kagoshima-Chuo Station, which was running in Kumamoto Prefecture at the time of the incident around 8:40 a.m., according to Kyushu Railway Co., known as JR Kyushu. 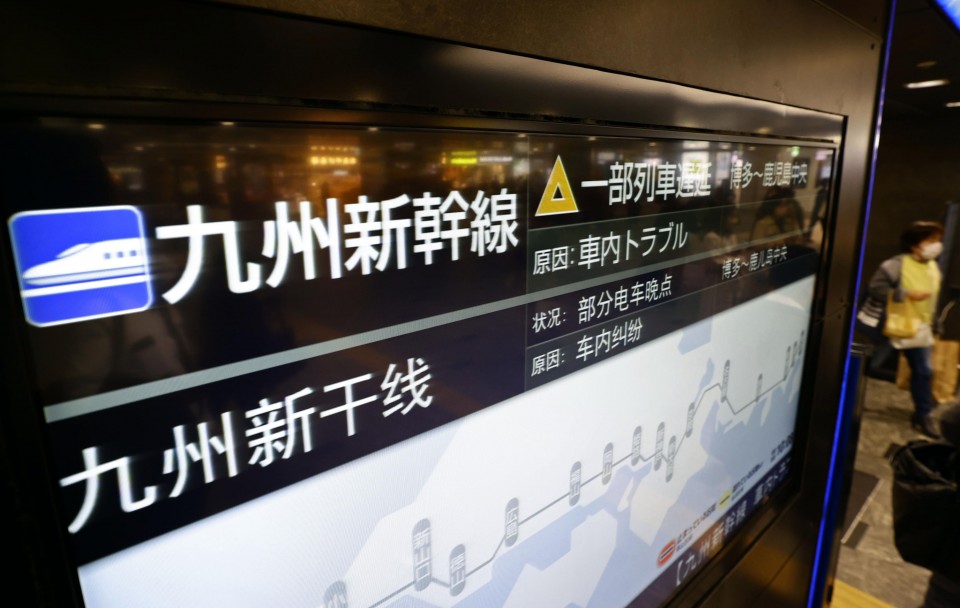 An electronic signboard at JR Hakata Station in Fukuoka, southwestern Japan, notifies passengers of a delay in shinkansen bullet train services on Nov. 8, 2021. A man was arrested on suspicion of attempting to start a fire on a shinkansen train bound for Kagoshima-chuo Station, which was running in Kumamoto Prefecture at the time of the incident. (Kyodo) ==Kyodo

Miyake was quoted as telling the prefectural police that he "wanted to imitate" the recent knife and arson attack on a train in Tokyo after seeing the news about it.

In the Oct. 31 incident, a man wearing a costume reminiscent of Batman villain the Joker injured 17 people, including one seriously, during the attack on a Keio Line train. The man, Kyota Hattori, has told investigators he adores the Joker and wanted to kill people and be given the death penalty.

In the latest case, Miyake said he spread a liquid, set fire to a piece of paper using a lighter and threw it on the floor, according to the police.

Smoke was seen inside the No. 3 car with around 30 people aboard, the operator said. After the emergency buzzer was sounded, the train made an emergency stop.

After moving passengers in the No. 3 car to another car, the train arrived at its final destination at around 10:25 a.m.

Some shinkansen services were temporarily suspended, resulting in delays of up to 50 minutes and affecting around 900 passengers.

A number of attacks on trains and station premises in the Tokyo area have occurred in recent years. A man stabbed and slashed 10 passengers in August on an Odakyu Electric Railway commuter train in the capital's Setagaya Ward.

In the worst incident on a bullet train, a man set himself alight on a shinkansen in June 2015, killing himself and a woman in her 50s. A total of 26 other passengers were injured, including two seriously, among the around 800 aboard.