Opposition parties in Japan are banding together for the Oct. 31 general election in a bid to break the near-monopoly on power the Liberal Democratic Party, led by Prime Minister Fumio Kishida, has held for the past six decades.

The Constitutional Democratic Party of Japan, the Japanese Communist Party and two smaller groups have formed an alliance to coordinate campaign promises and field fewer candidates in order to avoid competing for voters. 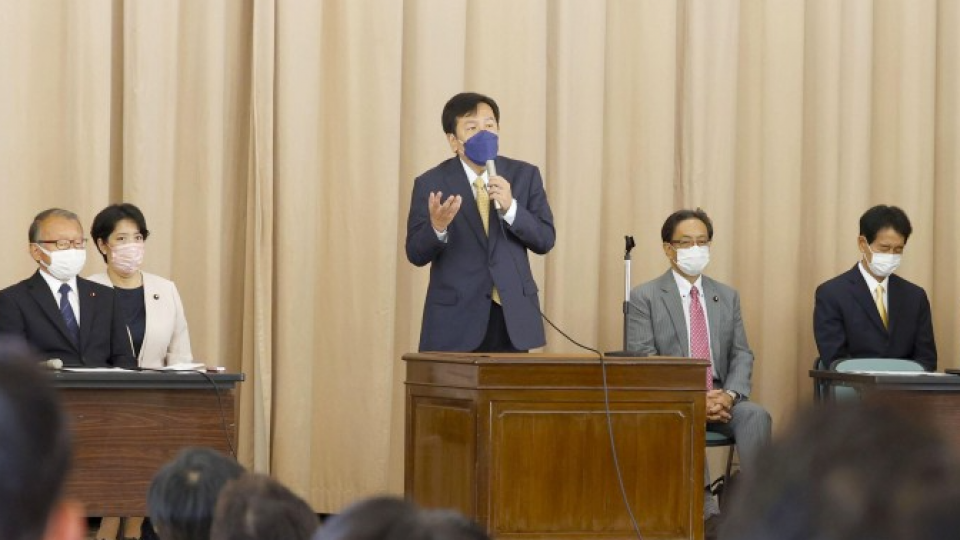 Yukio Edano (C), leader of the main opposition Constitutional Democratic Party of Japan, speaks during a meeting of lawmakers belonging to his party at the parliament building in Tokyo on Oct. 14, 2021, after Japan's House of Representatives was dissolved earlier in the day for a general election at the end of October. (Kyodo) ==Kyodo

The House of Representatives, the more powerful lower chamber of parliament, has 465 seats, 305 of which are controlled by the LDP and its coalition partner Komeito. The CDPJ holds 110 and the JCP has 12.

"Our goal is to realize a change in government," CDPJ leader Yukio Edano said at a party meeting on Thursday.

Traditionally, opposition parties have each fielded their own candidates in single-seat districts, meaning voters critical of the government were split among several choices, giving an advantage to the LDP and Komeito.

For the upcoming election, the CDPJ and the JCP have agreed to consolidate candidates in around 220 of the 289 single-seat districts, making them much more competitive.

"We will do everything we can to seize victory in these districts," said Akira Koike, head of the JCP's Secretariat, on Wednesday.

The LDP has only been ousted from power twice since its founding in 1955. The second time, from 2009 to 2012, was by the forerunner to the CDPJ, the Democratic Party of Japan.

Those three years, during which relations with the United States soured and the Fukushima nuclear disaster happened, have left a bad taste in the mouths of voters, said Tobias Harris, senior fellow for Asia at the Center for American Progress, a Washington-based think tank.

"The CDPJ still suffers from the DPJ's legacy. The public learned to trust the DPJ, gave it a chance to govern, but was then disappointed," Harris said. "The reality is that the LDP benefits from the perception that it is a competent, natural party of government and has to really misgovern to be penalized."

The CDPJ, JCP and their partners, Reiwa Shinsengumi and the Social Democratic Party, were left scrambling to coordinate after Kishida called the general election for Oct. 31 rather than either of two later dates that had been floated, Nov. 7 or 14.

With ballots to be cast just 17 days after dissolving the lower house on Thursday, it will be the shortest campaign in the post-World War II era.

"Short campaigns tend to favor whoever is in power because they have more resources to tell the public what the central issue of the election is," said Toru Yoshida, a political science professor at Doshisha University in Kyoto. "The opposition doesn't have the same means to reach out to voters." 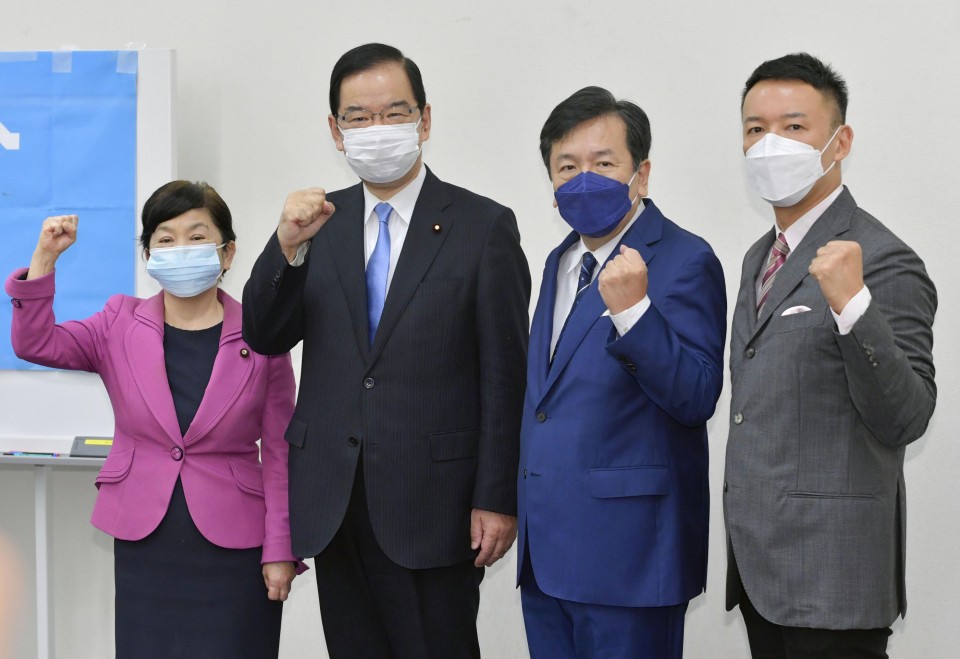 Leaders of four opposition parties, (from L) Mizuho Fukushima of the Social Democratic Party, Kazuo Shii of the Japanese Communist Party, Yukio Edano of the Constitutional Democratic Party of Japan and Taro Yamamoto of Reiwa Shinsengumi, pose for a photo on Sept. 8, 2021, at parliament after reaching a basic policy agreement for the next House of Representatives election. (Kyodo)

Kishida has said a simple majority, 233 seats, for the LDP and Komeito would mean victory and give him a mandate to carry out his COVID-19 and economic policies.

The quick timeline also appears to have limited the scope of the CDPJ and JCP's efforts to consolidate candidates, as they were unable to reach an agreement in about 45 single-seat districts.

Giving a glimpse of the chaos behind the scenes, Reiwa Shinsengumi leader Taro Yamamoto abruptly announced he will run in a Tokyo constituency that already had prospective contenders from both the CDPJ and JCP, only to face a wave of criticism and retract the decision days later.

The left-leaning alliance is also expected to have a difficult time differentiating its campaign promises from those of Kishida, who has vowed to implement a "new capitalism" that focuses on economic growth and redistributing wealth to the middle class.

"The opposition must feel like they've had their proposals flipped on them," Yoshida said.

The CDPJ and its partners have also adopted a shared platform pledging to lower the consumption tax from the current 10 percent and reduce carbon emissions without using nuclear power, as well as repeal controversial 2015 legislation expanding the role of the Self-Defense Forces.

One area where the alliance, which excludes more right-leaning groups such as the Japan Innovation Party and the Democratic Party for the People, may appeal to voters is social issues such as giving married couples the option to use different surnames.

Kishida, a moderate, has called for further debate and seems especially reluctant to recognize same-sex marriage, saying the matter "concerns the very basis of the family" and requires "extremely careful consideration."

But Harris, of the Center for American Progress, voiced doubts over whether social issues will be enough to get voters out in support of the opposition, especially considering their disappointment with the DPJ's turn in power.

"Are the voters ready for more competitive politics again, or will they continue to look to the LDP and Komeito for stable government over change and competition? I suspect that the latter remains true," he said.