While Japanese Prime Minister Fumio Kishida vowed to show the people that his ruling party has been "reborn," voters will still see familiar names on the ballot in Sunday's general election as political dynasties continue to dominate the country's political landscape.

A number of veteran lawmakers have decided to retire by not running in the Oct. 31 House of Representatives election, but many of the fresh faces voters are seeing in their constituencies have the same old names.

In Saitama Prefecture, near Tokyo, over 500 people including local assembly members gathered at a shrine in Higashimatsuyama on Tuesday morning where Susumu Yamaguchi, a son of 72-year-old ruling Liberal Democratic Party heavyweight Taimei Yamaguchi, kicked off his campaigning. 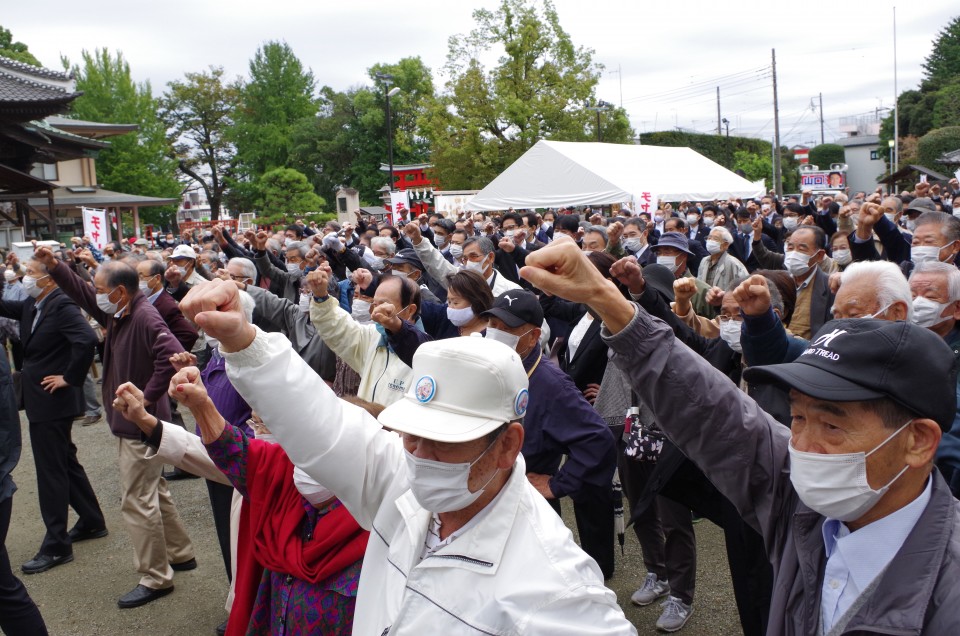 Voters raise their fists in support of Susumu Yamaguchi, a son of retiring LDP heavyweight Taimei Yamaguchi, in Saitama Prefecture on Oct. 19, 2021. (Kyodo)

The 38-year-old newcomer, who is facing a much older candidate from the main opposition Constitutional Democratic Party of Japan, pledged to follow in the footsteps of his father.

Veteran LDP upper house members who joined Yamaguchi in his speeches called on voters to support him, reminding them of his father's achievements.

Inheritance of incumbency is conspicuously prevalent in Japan's national politics, with many faces in the LDP hailing from political dynasties.

Former Chief Cabinet Secretary Yasuhisa Shiozaki, 70, is another veteran lawmaker who is not running in the election. His 45-year-old son is a lawyer contesting for a seat in Ehime Prefecture, western Japan.

Among other veteran LDP members, Jiro Kawasaki, 73, and Takeo Kawamura, 78, are also bowing out and letting their sons take over.

Of the 336 LDP candidates for the upcoming election, 104 people, or 31.0 percent, either have taken over their constituencies from family members, or have parents or grandparents who were lawmakers.

The number is much higher than that of the CDPJ at 29 people or 12.1 percent.

Hereditary politics has long been subject to criticism, as political blue bloods typically inherit a support base and make it difficult for challengers to break the hold of incumbent families in power.

Dynastic politics is common elsewhere around the world, and multiple generations of well-known political family names such as Bush in the United States, Trudeau in Canada, Nehru-Gandhi in India and Aquino in the Philippines served as their countries' leaders.

"Although Japan is not a unique case, it has a higher percentage of lawmakers who hail from a political dynasty in comparison with other democracies," said Yu Uchiyama, a professor of political science at University of Tokyo.

Uchiyama attributes the abundance of dynasties in the LDP to the fact that younger members of dynasties enjoy three advantages -- an electoral support base, name recognition and financial support -- necessary to win an election.

"But it does not mean political dynasties are bad," Uchiyama said, adding that second- and third-generation politicians tend to know a lot about how lawmakers should behave.

People having new ideas and knowledge of policymaking but lacking human networks and financial resources needed for successful campaigning "will be less likely" to gain a footing in politics after all, Uchiyama said.

The LDP has long sought a change in the party rules to impose stricter criteria in endorsing people who come from a political pedigree, as seen in the party's reform drive for the 2009 general election toward banning people within the third degree of kinship of outgoing LDP members from running in the same constituency.

Kishida's predecessor Yoshihide Suga told a lower house committee last November when he was the premier that the party should impose some restrictions on political dynasties.

However, Kishida, who became prime minister on Oct. 4, appointed many lawmakers who are political blue bloods at the local or national level in his Cabinet. Kishida himself is from a political dynasty.

Finance Minister Shunichi Suzuki, 68, is the son of former Prime Minister Zenko Suzuki, and has taken over the post from his brother-in-law Taro Aso, 81, whose grandfather also served as prime minister.

The CDPJ is not strictly voicing denial of dynasties in the upcoming election.

In the past, former Prime Minister Yoshihiko Noda, who headed the now-defunct forerunner party of the CDPJ, the Democratic Party of Japan, pushed for a ban on hereditary succession in the 2012 general election, but the policy line has not been passed on to the CDPJ.

Yukio Edano, leader of the CDPJ, said in a press conference in June that the party should not automatically deem political dynasties as unfavorable.

The CDPJ is backing former economic and fiscal policy minister Satoshi Arai's 46-year-old son Yutaka in a Hokkaido constituency as the 75-year-old former minister decided not to seek re-election.

A 74-year-old man from Saitama Prefecture said, "Japanese politicians seem to be treating national politics almost like a family business."

Meanwhile, an LDP supporter said, "I think it is brave for an LDP lawmaker to retire and make way for his son. I think I can trust the son rather than someone I don't really know."