The Group B clash at Saitama Stadium looked set for a stalemate until VfL Bochum forward Asano broke into the box and chipped Australia keeper Mathew Ryan, the shot hitting the post and deflecting off defender Aziz Behich for an own goal. 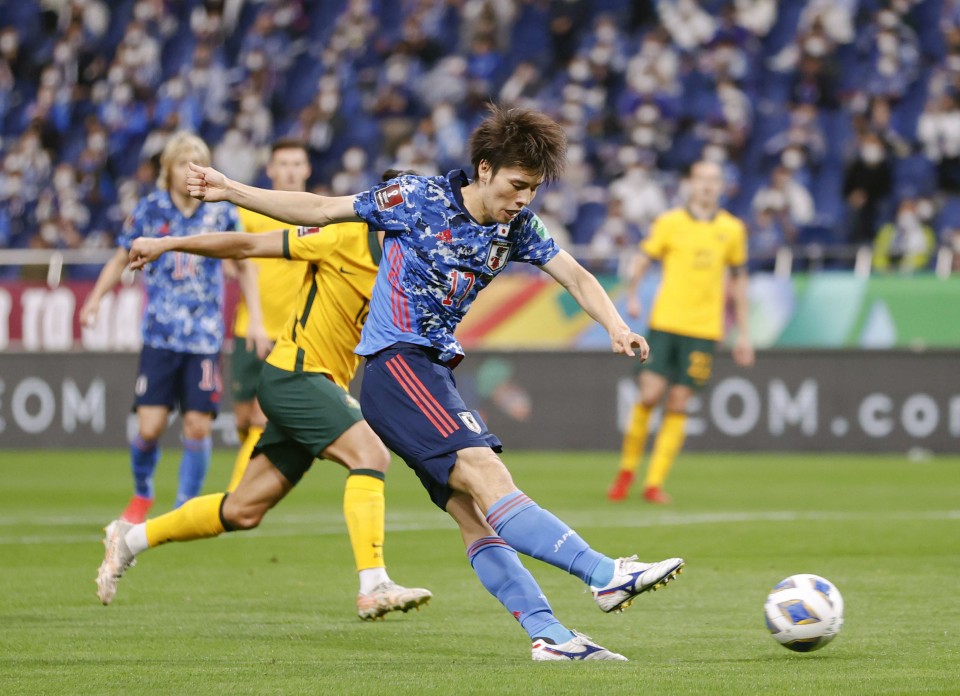 Ao Tanaka of Japan opens the scoring during a Group B football match against Australia at Saitama Stadium in Saitama, near Tokyo on Oct. 12, 2021, in the final group-phase round of Asian qualifying for the 2022 World Cup in Qatar. (Kyodo)

Fortuna Dusseldorf midfielder Ao Tanaka had given the hosts the lead in the eighth minute, but Socceroos playmaker Ajdin Hrustic put his side on level terms with a stunning 69th-minute free kick.

The victory leaves Japan on six points with two wins and two losses, moving them within three points of the previously unbeaten Socceroos.

The result may have also saved the job of Japan manager Hajime Moriyasu, who was feeling the pressure following Japan's floundering start to the final stage of Asian qualifying for the 2022 World Cup in Qatar.

"We've been preparing ourselves diligently, and that led to this result. We were under great pressure, but the players, coaches, the entire staff, came together as one and stood tall," Moriyasu said.

Coming off a deflating 1-0 loss away to Saudi Arabia on Thursday, another defeat could have torpedoed Japan's bid for direct qualification.

Moriyasu made three changes to the side that lost to Saudi Arabia, with Asano, Daichi Kamada and Gaku Shibasaki making way for Tanaka, Hidemasa Morita and Junya Ito, who was returning from suspension.

The addition of Tanaka and former Kawasaki Frontale teammate Morita in an altered formation appeared to invigorate the Japanese midfield, with the pair helping blunt the Australian attack while also providing a threat going forward.

Tanaka gave the hosts the lead with a confident finish, corralling a lofted diagonal ball from Takumi Minamino and firing across Ryan from the right of the area.

"I believed in Takumi's ability to do his job there and just kept running. I stopped the ball and was able to concentrate and did well to get it in," the 24-year-old Tanaka said.

"Today's formation was completely new to me, and I didn't really have time to practice it, so it was pretty hard. I worked really hard on the ball and was able to do OK, I think."

Despite a dominant first half, the Samurai Blue were once again hamstrung by their lack of ruthlessness in front of goal.

In a frenzied ending to the half, Cerezo Osaka striker Adam Taggart saw his close-range shot ricochet into the post off Japan keeper Shuichi Gonda's hand before Minamino forced a diving stop from Ryan at the other end, turning and firing from the edge of the area.

The video assistant referee gave Japan an initial reprieve midway through the second half, with a penalty overturned after Morita was found to have committed a foul just outside the area.

Eintracht Frankfurt midfielder Hrustic, nevertheless, hit the target with his free kick from the edge of the box, grazing the bottom of the bar with a viciously curling shot.

Japan were unlucky not to be awarded a penalty of their own, with neither the referee or VAR responding to Minamino being tripped up in the box.

Real Sociedad's Ryan kept his side on level terms with a succession of saves late in the half, including on an Asano attempt from the edge of the box.

But Asano, who entered in the 78th minute for Minamino, kept up the pressure and delivered the breakthrough with his clever chip that just grazed Ryan's fingertip.

A "relieved" Japan captain Maya Yoshida said the first of two matches against group rivals Australia had been do or die for the men in blue.

"We came in with two games against Australia that could each mean a six-point swing in the table. We were at least able to get the first one out of the way, now we have more work to do," the Sampdoria center-back said.

Under Japan's COVID safety rules, stadium attendance is capped at 10,000, but an additional 5,000 fans with proof of vaccination or a negative test for the coronavirus were allowed entry to Saitama Stadium. 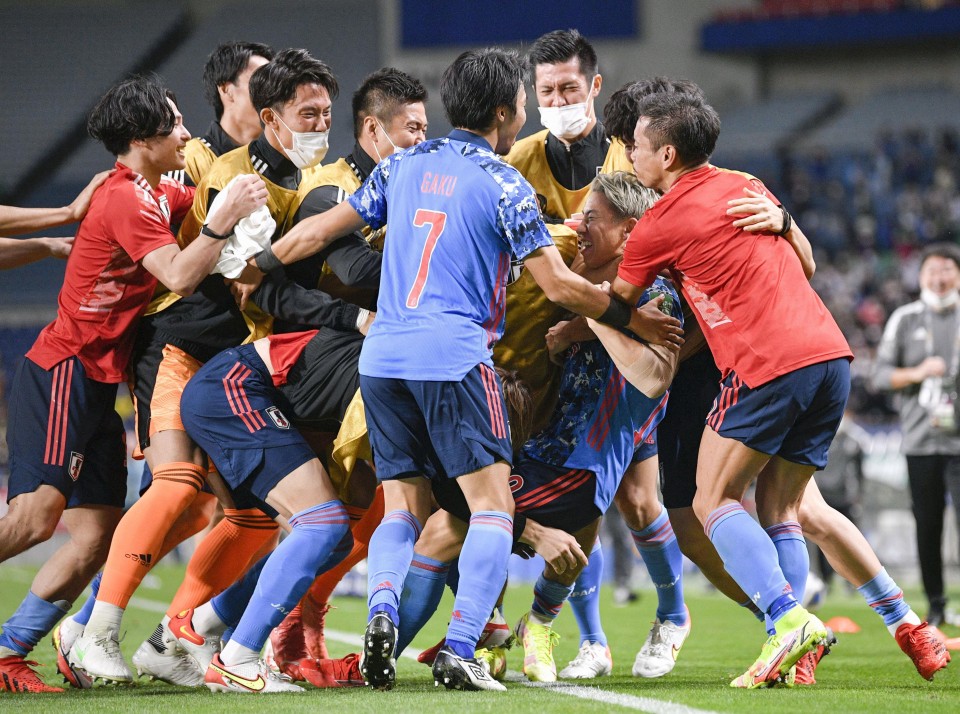 Japan players celebrate after an own goal by Australia defender Aziz Behich gave them the lead late in the second half of a Group B football match on Oct. 12, 2021, at Saitama Stadium in Saitama, near Tokyo, in the final group-phase round of Asian qualifying for the 2022 World Cup in Qatar. (Kyodo) ==Kyodo 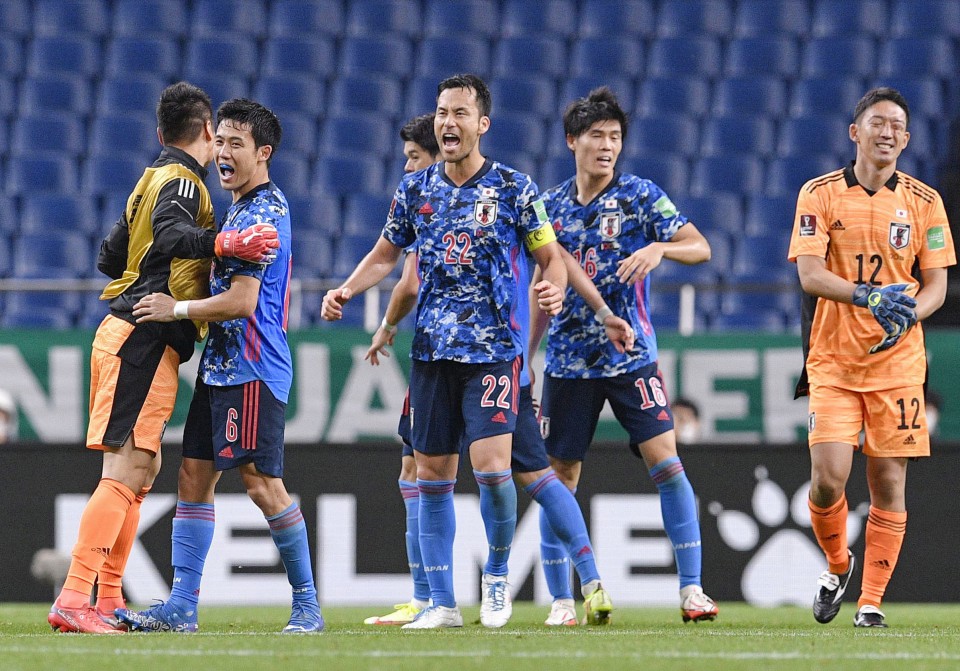 Japan players celebrate after a 2-1 win over Australia in a Group B football match on Oct. 12, 2021, at Saitama Stadium in Saitama, near Tokyo, in the final group-phase round of Asian qualifying for the 2022 World Cup in Qatar. (Kyodo) ==Kyodo