Baseball's arrival on Japan's shores should be viewed to have been in 1871, one year earlier than is commonly thought in Japan, a British historian argues based on two separate contemporary English newspaper articles from the time about a game played that year in Yokohama.

Next year is widely believed to mark the 150th anniversary of baseball's debut in Japan, introduced by Horace Wilson, an American teacher who taught English to Japanese students at a school later known as Kaisei Gakko, currently the University of Tokyo. Wilson taught the sport to his students. 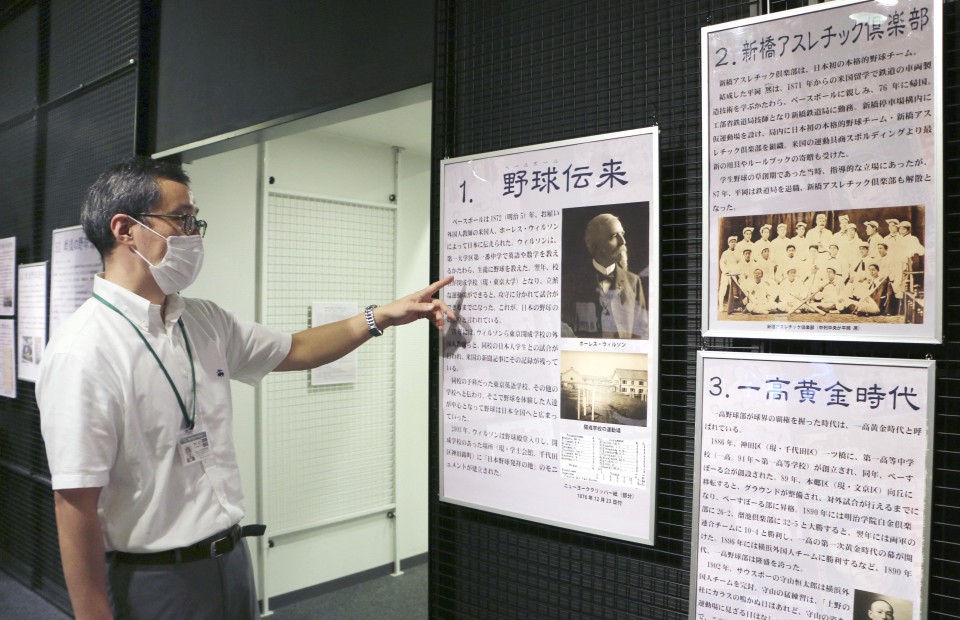 A special exhibition opens on Sept. 10, 2021, at the Baseball Hall of Fame and Museum in Tokyo to celebrate the year of 2022 as the 150th anniversary of the introduction of baseball in Japan by Horace Wilson. (Kyodo)

The Baseball Hall of Fame and Museum in Tokyo recognizes 1872 as the beginning of the sport in Japan and credits Wilson, who was hired by the Japanese government to promote the modernization of the country's education following the Meiji Restoration, as one of the people responsible.

However, Tokyo resident Mike Galbraith, 74, who has an MA in sports history and has been researching the early history of western sports in Japan since 2009, says that a reevaluation of the history of the sport should be conducted and the earliest evidence of a baseball game being played in Japan included. He points out the game in Yokohama has been mentioned by many historians.

"An objective history of any western sport in Japan should start with the earliest factual evidence of the sport being played," Galbraith said in an email to Kyodo News, adding that such evidence would hopefully include details, such as the first game and score.

The Japan Weekly Mail, an English newspaper from those days in Yokohama, reported that a baseball game was played on a ground on the swamp in Yokohama, near Tokyo, on Oct. 30, 1871 between the sailors of Colorado and "nine civilians" -- likely foreign residents living in the Japanese port town.

"I know of the game played in Yokohama in 1871," said Takahiro Sekiguchi, chief curator at the Baseball Hall of Fame and Museum, but the museum does not mention it in any of its exhibitions.

Sekiguchi explained that the museum gives considerable significance in Japanese baseball history to Wilson teaching his students the game. Whereas the 1871 match was just a one-off event, Wilson's introduction led to a baseball boom among college students across Tokyo in the late 19th century.

In terms of the transmission of the sport to Japanese citizens, it would be fair to say Wilson played a key role in making baseball a national pastime as seen today, he explained.

In September, the Baseball Hall of Fame and Museum started a special exhibition to celebrate the year 2022 as the 150th anniversary of the arrival of baseball in Japan.

Robert Whiting, a well-known American author of a series of books on U.S. and Japanese baseball history and culture, says the museum "should display a photo of that 1871 newspaper article (the Japan Weekly Mail) in its history gallery," adding, "This does not take away from the considerable accomplishments of Horace Wilson." 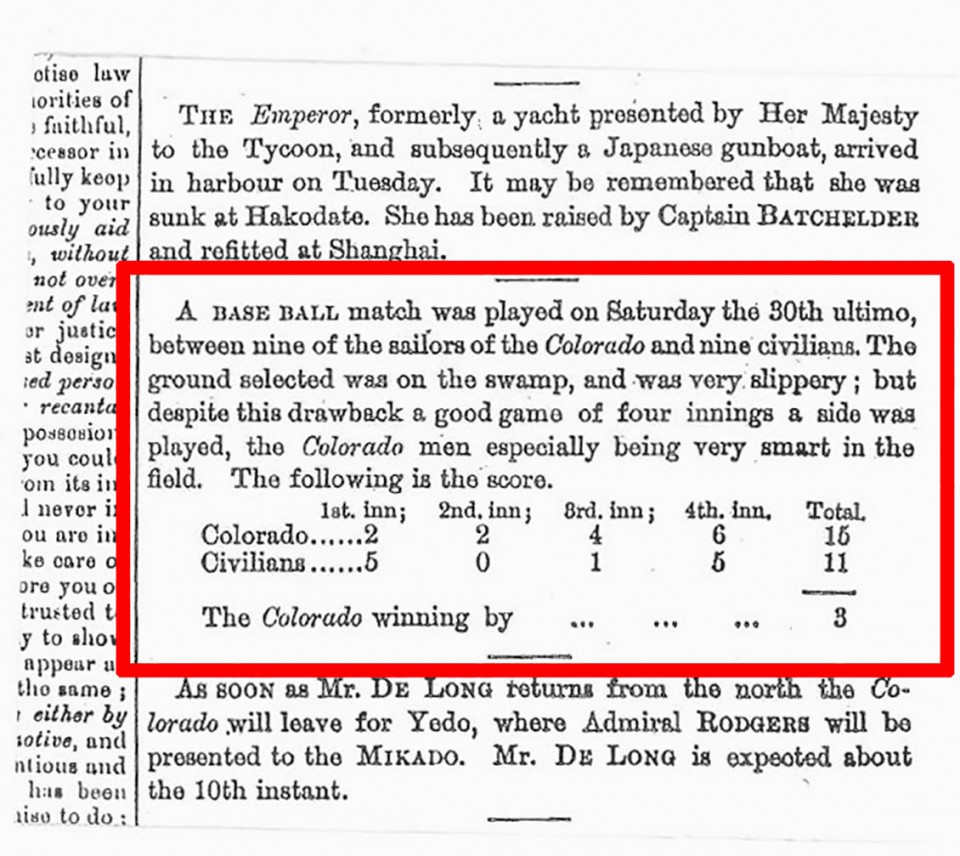 An article of the Japan Weekly Mail (C) shows that a baseball game was played on Oct. 30, 1871 in Yokohama. (Photo courtesy of Yokohama Archives of History)(Kyodo)

Galbraith also says he has found newspaper reports and other evidence that show foreign residents founded the Yokohama Base Ball Club and the Tokio Base Ball Club in 1876, making them the first baseball clubs in Japan. This runs contrary to the widely held belief that the Shimbashi Athletic Club established in 1878 was the first organized baseball club in the country.

According to Galbraith, the Yokohama Base Ball Club survives today as part of the Yokohama Country and Athletic Club.

In 2019, Galbraith played a pivotal role in the creation of a memorial in Yokohama's Chinatown to honor the legacy of Japanese rugby after uncovering documentary evidence that the country's first rugby club was established there in 1866, revising the common belief that the sport was introduced to Japan in 1899.

Galbraith's research led to the World Rugby Museum in Twickenham, England, recognizing his claim that the founding of that rugby club in Yokohama in January 1866 was the first in Asia.