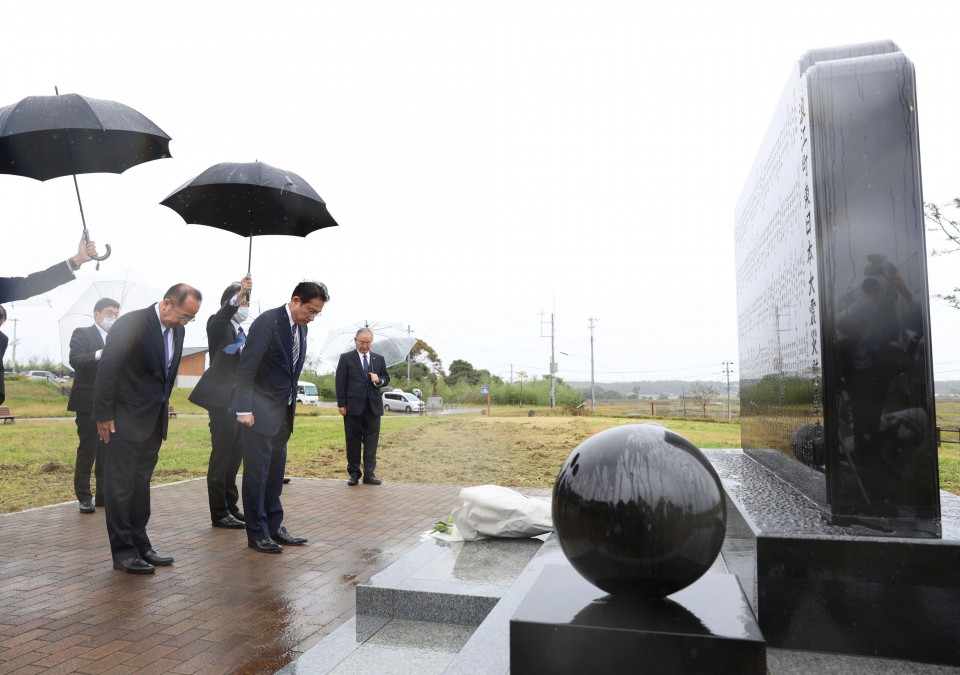 LDP most popular, nearly 40% of voters undecided ahead of election

TOKYO - The ruling Liberal Democratic Party is the most popular among Japanese voters ahead of the general election, though nearly 40 percent remain undecided on which party they will vote for, a Kyodo News survey showed Sunday.

In the nationwide telephone survey conducted on Saturday and Sunday, 29.6 percent of respondents said they will vote for the LDP led by Prime Minister Fumio Kishida when casting ballots under proportional representation on Oct. 31, followed by 9.7 percent backing the main opposition Constitutional Democratic Party of Japan.

TOKYO - Prime Minister Fumio Kishida on Sunday sent a ritual offering to Yasukuni, a Shinto shrine in Tokyo viewed as a symbol of Japan's past militarism by its Asian neighbors.

The "masakaki" tree offering was made under his name as prime minister to celebrate the shrine's biannual festival held in the spring and autumn.

WASHINGTON - North Korea may resume long-range ballistic missile tests over the next year, the U.S. Defense Intelligence Agency says in a report analyzing the country's military capabilities, warning that Pyongyang will continue to pose a "critical security challenge" for the United States and its allies.

The report, which was released Friday, is the latest warning about North Korea's efforts to beef up its military power despite not having tested intercontinental ballistic missiles or nuclear devices over the past several years.

Speaking on a Fuji TV program, Yamagiwa said the fund would help accelerate the application of artificial intelligence, biotechnology, and robotics, adding, "Japan's economy will not grow unless we make changes to the industrial structure with science and technology as the foundation."

Kishida told executives of the plant's operator, Tokyo Electric Power Company Holdings Inc., that decommissioning is a "prerequisite for reconstruction" of Japan's northeastern region, devastated by a magnitude-9.0 earthquake, tsunami and subsequent nuclear crisis in 2011.

TOKYO - Japanese Princess Mako on Sunday visited the Imperial Palace to attend an annual ritual ceremony, her last as an imperial family member as she is scheduled to marry her commoner boyfriend later this month.

Princess Mako, 29, whose fiance Kei Komuro returned from the United States last month, entered the palace by car with her younger sister, Princess Kako. Sitting side by side in the back seat, the princesses opened the window to wave with a smile at people who had gathered along the road in the rain.