Prime Minister Fumio Kishida said the upcoming national election will be held to "select the future" of Japan, but it remains to be seen whether young people will show up at the polls to influence the direction of the nation despite efforts to turn them out.

There has been one general election since Japan lowered the minimum voting age to 18 from 20 in 2016 to encourage young people to get involved and have their say. But turnout rates of those in their 20s and younger are traditionally lower than those of older people, and political experts say Sunday's lower house election will not likely see a major change.

At the same time, they say the COVID-19 pandemic has made it easier for young people to get across information about the House of Representatives election as candidates are turning to online platforms to reach out to voters without risking the spread of the virus. 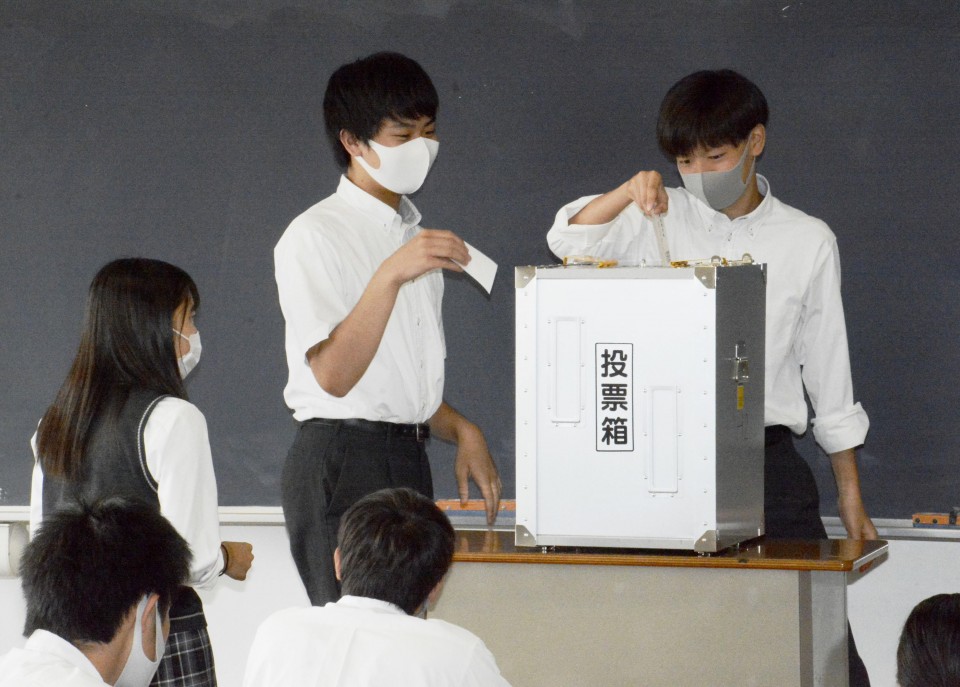 High school students cast their votes in a mock election during class in Hachioji, Tokyo, in June 2021. (Kyodo)

On the weekend before the election, about 20 students from universities across Japan took part in an online event to exchange ideas about how to improve the turnout of their cohort.

Following hours of group discussions, the students presented their ideas, ranging from creating an anime about candidates and where they stand on key issues, to handing out discount coupons or hosting mock elections at schools. The event was held by nonprofit Dot-jp, an organization that has been working toward engaging Japan's young people politically.

Shuta Hosotani, a 21-year-old university student and student representative of the organization, said he has seen how disconnected people in his generation are with national politics.

"I think the biggest reason is that it is difficult to understand what will change or what good will happen from voting," said Hosotani, a fourth-year student at Mie University in central Japan.

Such sentiment is understandable given the Liberal Democratic Party's current dominant position, and the fact that the same party -- with many multiple-generation political families playing prominent roles -- has been in power for all but approximately four years since 1955.

"Even if they know the importance of voting, they don't know how to choose who to vote for or who will make the society better," Hosotani said of Japan's youth. "It is difficult for young people to feel they are part of the process."

There are numerous reasons for the low turnout of the younger generation, experts say.

Hiroshi Shiratori, a political science professor at Hosei University, said he thinks youngsters have "felt left out" by Japanese politicians who prioritize their re-election by crafting policies to woo the elderly who make up an increasingly large part of Japan's graying population.

"As for political parties, they put more effort toward (policies for) the elderly with a turnout rate of 60 percent rather than the younger people with only a 30 percent return," Shiratori said. "There are policies for people with children or working generations, but those are not given high priority."

While the term "silver democracy" has been used to describe Japanese politics centering on the elderly, Shiratori said young people should realize that they are the ones who will shoulder challenges linked to the country's mammoth national debt and increasing economic burden as more and more people move into retirement. 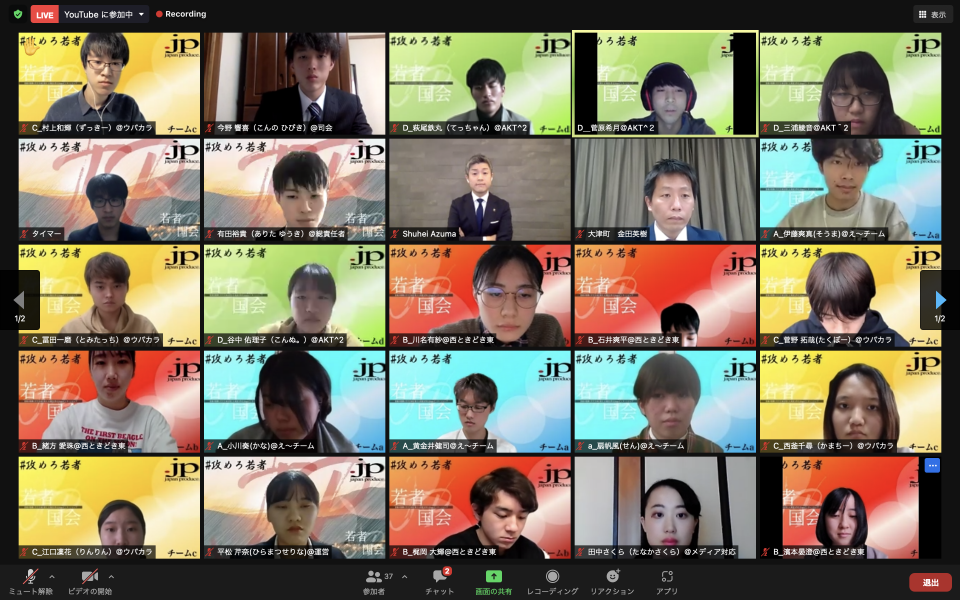 Screenshot taken on Oct. 24, 2021, shows an online event organized by nonprofit Dot-jp for university students to exchange ideas about how to improve voter turnout of young people. (Kyodo)

Yutaka Shinada, a professor at Kobe University's graduate school, also said it may be difficult for young people in Japan to conceptualize how the country can improve economically, as they were born after the collapse of the bubble economy in the early 1990s and have only experienced the country in a period of relative stagnation.

"When the elderly were younger, it was obvious what they looked for in politics, and that was creating a strong economy. But now, young people don't know what they want or how the country will be," he said. "When the current young generation thinks of change, they may associate it with risk."

Schools have been offering so-called citizenship education to students to improve their understanding of politics and elections. But it has not yet paid off as the youth voter turnout at national elections has seen a decline since the 2016 upper house election.

But the experts expressed hope that the upcoming lower house election may be a "turning point" in fostering interest in politics, even though it may not immediately translate to markedly improved youth turnout.

A recent survey by the Nippon Foundation found that 55.2 percent of people aged between 17 and 19 who will be eligible to vote on Sunday will vote or likely vote in the election. "Health and hygiene" was ranked as their highest priority issue.

The coronavirus pandemic has made it difficult for candidates to hold rallies or meet their constituents in person, especially with the elderly, due to fear over the spread of infections. Instead, they are using social media and other online tools to communicate to the public.

"That means there are more resources for young people, who have grown up using smartphones. If they become interested, the voter turnout may increase a little bit," said Shiratori, director of Hosei's Institute of Policy Sciences, adding that turnout may fall for the elderly demographic as they may be wary of voting in person during the pandemic.

Shinada of Kobe University said it remains uncertain how much social media campaigning will have an effect at the upcoming election. However, it may influence how politicians communicate with their constituents even when the pandemic has passed.

"Until now, young people turned their backs on politics, and politicians did not depend on them (for votes) because they are fewer in number, but that may change in a positive way," he said.