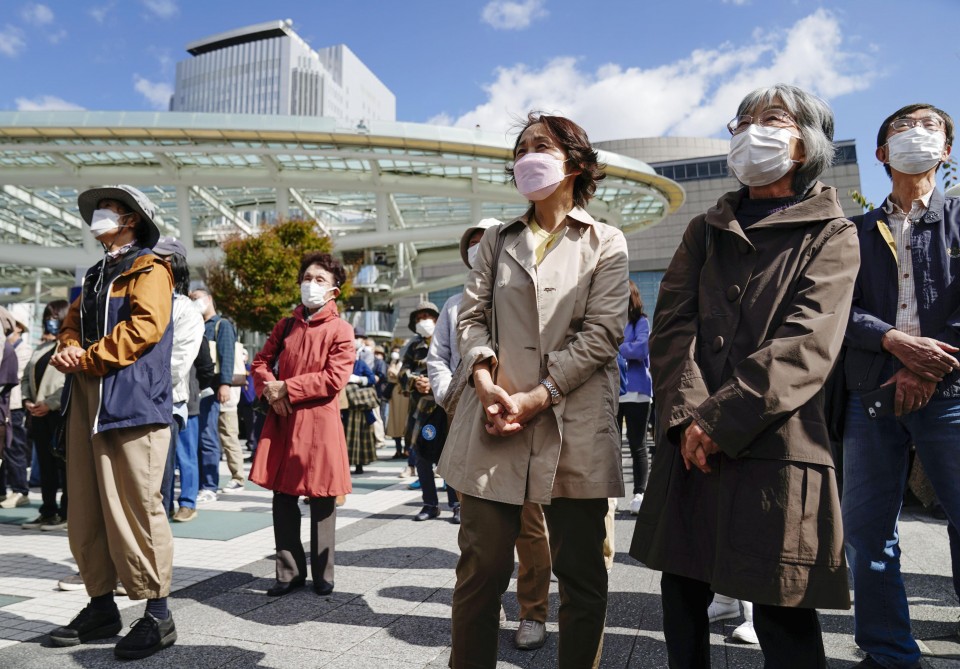 People listen to a politician giving a stump speech in Nagoya, central Japan, on Oct. 23, 2021, ahead of a general election on Oct. 31. (Kyodo) ==Kyodo

TOKYO - About 36 percent of the electorate plan to cast constituency votes for Japan's ruling coalition led by the Liberal Democratic Party in next week's general election, compared with 19.7 percent for candidates backed by five opposition parties, a Kyodo News survey showed Sunday.

A week before the House of Representatives election, the difference between the two sides has narrowed by 5.2 percentage points since the previous survey was conducted in mid-October.

TOKYO - Tokyo confirmed 19 daily coronavirus cases on Sunday, the fewest since mid-June last year, as the downtrend in infections continues across Japan.

The figure released by the Tokyo metropolitan government was below 20 for the first time since June 17, 2020, when it reported 16 new infections.

SINGAPORE - Leaders of the Association of Southeast Asian Nations will continue to press Myanmar to allow the group's special envoy to visit the country to try to mediate among the feuding parties, according to a draft of a chairman's statement to be issued at this week's ASEAN Summit.

The draft seen by Kyodo News implicitly calls on the junta to implement its commitment to a five-point consensus agreed by ASEAN leaders in April to help find a solution to the country's political crisis, "including by facilitating the visit of the Special Envoy to Myanmar to build trust and confidence with full access to all parties concerned."

INZAI, Japan - Hideki Matsuyama won the Zozo Championship on Sunday to claim his first PGA Tour title on Japanese soil and seventh of his career, a 4-under back nine separating him from his main challenger and giving him a 15-under four-round total.

With Matsuyama applying pressure, American Cameron Tringale could not match the pace on the back nine after leading earlier in the day at Narashino Country Club in Chiba Prefecture near Tokyo.

The 27-year-old Hagino won bronze in the same race at the 2012 London Games as a high school senior. He also won the 200 IM silver and a bronze in the 4x200 freestyle relay in Rio but failed to reach a podium this summer in Tokyo.

Miura and Kihara were third after Friday's short program at Orleans Arena, and third in their free skate. Russians Evgenia Tarasova and Vladimir Morozov won both to finish with 222.50 points.

FUKUSHIMA, Japan - An elementary school in northeastern Japan opened on Sunday as a memorial to those impacted by the massive 2011 earthquake and tsunami disaster and subsequent Fukushima nuclear crisis, with its mission to pass on lessons learned from the tragedy.

Ukedo Elementary School, run by the town of Namie in Fukushima Prefecture, is the first memorial in the prefecture that preserves buildings in their damaged state.