Shohei Ohtani finished his fourth season in the majors with a leadoff homer -- his 46th long ball of the season -- as the Los Angeles Angels spoiled the Seattle Mariners' playoff hopes with a 7-3 victory in their season finale on Sunday.

Ohtani's homer came on an 86.4-mile-per-hour (139-kilometer) cutter, the third pitch of his first at-bat against Seattle left-hander Tyler Anderson (7-11). He went 1-for-3 with two walks in the last game of the regular season held at T-Mobile Park. 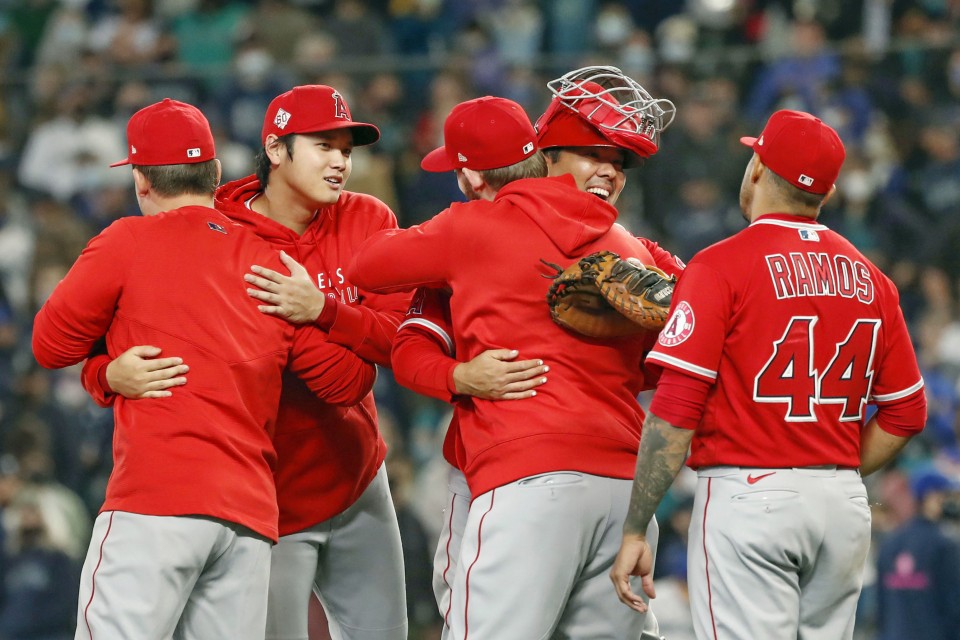 The Los Angeles Angels celebrate after a 7-3 win over the Seattle Mariners at T-Mobile Park in Seattle, Washington, on Oct. 3, 2021, the final day of the season. (Kyodo) ==Kyodo

Ohtani finished with 100 RBIs and was one home run shy of matching Troy Glaus' Angels franchise record of 47 in 2000.

The 27-year-old became the first Japanese player to reach 100 MLB RBIs in a season since Hideki Matsui in 2007. He also passed Matsui for most home runs in a single season by a Japanese-born player, hitting 15 more than the former New York Yankees slugger did in 2004.

In a season of two-way firsts, Ohtani fell one win short of tying Babe Ruth's 103-year-old record of double-digit wins and home runs in a single season, and fell just two short of equaling the home run title winners.

In his MVP-caliber season, Ohtani appeared in 158 of the team's 162 games and did not spend a single day on the injured list.

Ohtani said his biggest takeaway from 2021 was learning to maintain his health and performance over a full season.

"It was simply enjoyable to play in more games (than in previous years) and more fulfilling as a player as it meant more opportunities to contribute. It was a fun year," Ohtani said.

"I'll leave it to the fans, coaches and manager to decide whether I met expectations, but for me, personally, it was good that I survived a whole year without any major injury. I should've reached this point sooner in my career."

Ohtani, the first Japanese to participate in the All-Star Home Run Derby and the first two-way All-Star in MLB history, said being a part of the home run chase was a valuable experience and the challenge was inspiring due to the great players he was competing against.

When asked if he felt there was any room for improvement, Ohtani said he would like to conquer the mental side of pitching.

"I was experimenting with a lot of things when it came to pitches. If I learn to pitch with more confidence and perform consistently over a full year, I'm sure I'll have a better season."

Ohtani's conduct on and off the field earned him constant plaudits, his habitual picking up of litter in the Angels' dugout and around the field as well as his friendly interactions with bat kids established him as a firm fan favorite.

"(Trash and debris) in the dugout can be dangerous. Some people fall down the stairs, and I don't want anyone, including myself, to be hurt in preventable accidents," he said.

Ohtani said he expects his offseason to be no different than his previous years, but he wants to increase the intensity of his workouts.

"I believe I can reach higher levels," he said.

It remains to be seen whether the Angels, who finished out of the playoff picture with a 77-85 record and fourth in the American League West, will negotiate a contract extension with him this winter. Ohtani is due to earn $5.5 million next season and has one more year of arbitration before hitting free agency in 2024.

"Of course I'll be open to negotiation. The team has supported me for these four years and I'm really appreciative of that. Whether or not there's any long-term contract extension, I just want to be ready to perform next season."