Many train services including some bullet trains as well as subway lines in the capital were suspended following the temblor. Although some train operators resumed services later, many people affected by the disruptions lined up for taxis at some stations.

The quake occurred at 10:41 p.m., logging upper 5 on the Japanese seismic intensity scale of 7 in parts of Tokyo and Saitama Prefecture, with the focus of the quake in northwestern Chiba Prefecture at a depth of about 75 kilometers, the Japan Meteorological Agency said. A tsunami warning was not issued. 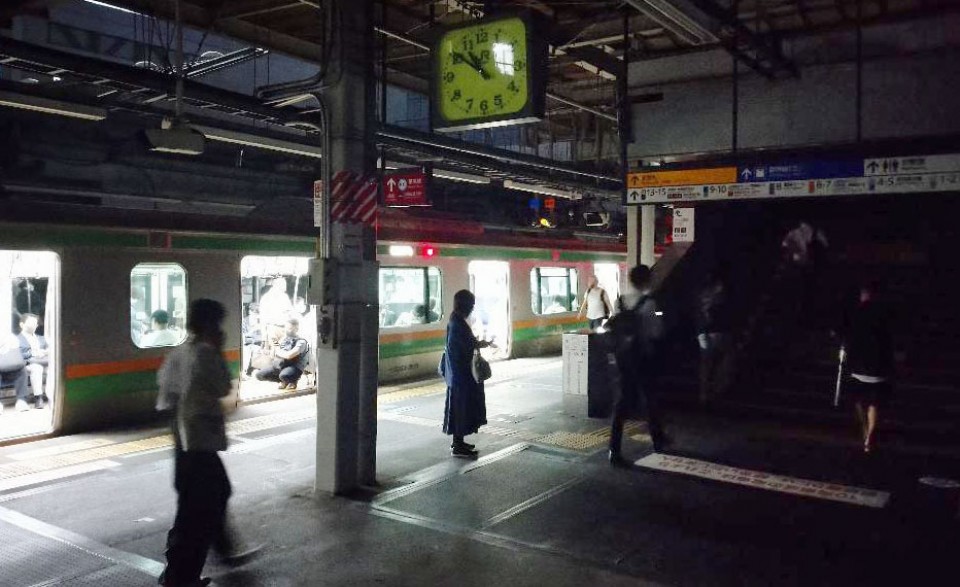 A Tokaido Line train is stopped at JR Shinagawa Station in Tokyo after an earthquake with a preliminary magnitude of 5.9 jolted the Tokyo region on Oct. 7, 2021, leading to a power outage at the station. (Kyodo) ==Kyodo

The last time a quake measuring upper 5 or more was registered in Tokyo's 23 wards was on March 11, 2011, when a magnitude-9.0 quake devastated northeastern Japan and triggered a massive tsunami, the agency said.

The agency initially said the magnitude of the quake was 6.1 but revised it down early Friday.

The agency warned that a quake of similar intensity could occur within the week, with an official estimating a 10 to 20 percent chance based on previous temblors.

While the strong jolt frightened many people in the Tokyo region, the agency said the latest temblor was smaller in scale than one feared to be likely in the future, which would have a focus just below the metropolitan area and result in devastation with large-scale human casualties.

The latest quake also triggered so-called long-period ground motion, which causes slow but significant rocking of high-rise buildings for a long period of time and can lead to injuries for those inside. The phenomenon was observed in the capital when the megaquake hit northeastern Japan in March 2011. 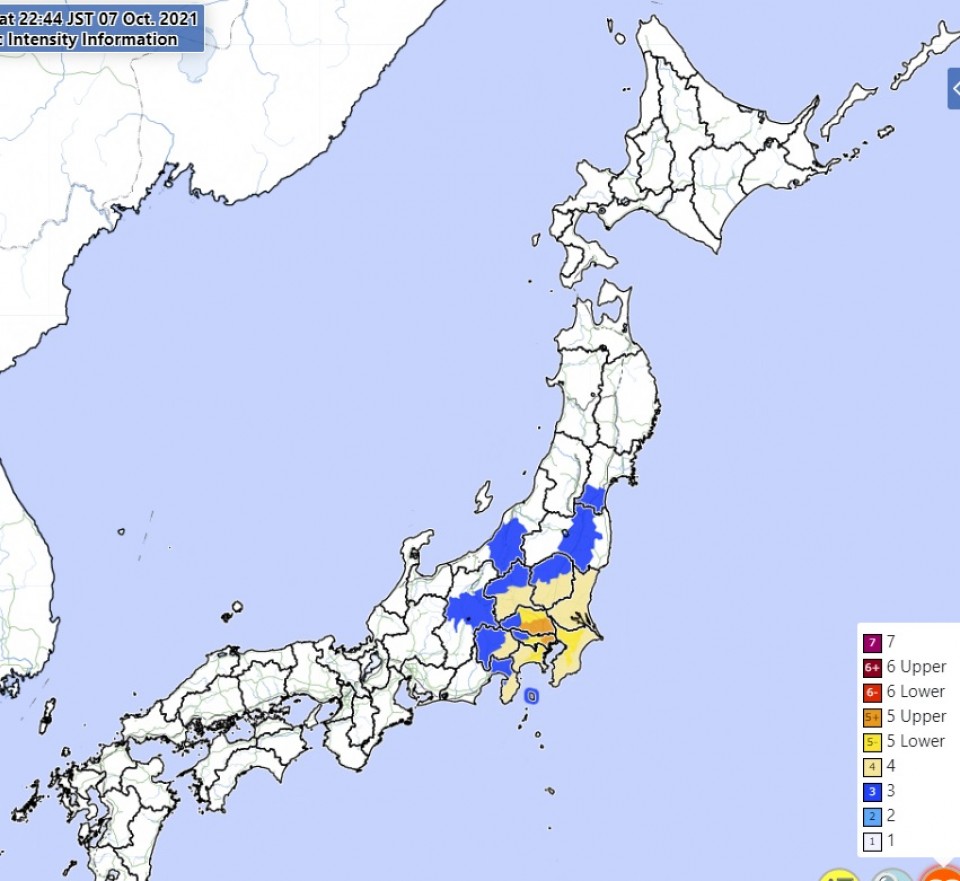 More than 20 people were injured in Tokyo and the surrounding prefectures, including a female passenger who fell and hit her head when a train came to a sudden halt, according to police and firefighters.

Among those injured were also three people who fell down when an automatically-operated train derailed slightly in Tokyo's Adachi Ward after the quake.

There were many reports of burst pipes and water supply cuts in Tokyo, officials said. Water was seen gushing out of a pipeline that runs across a river in Ichihara, Chiba Prefecture, apparently due to damage from the quake. 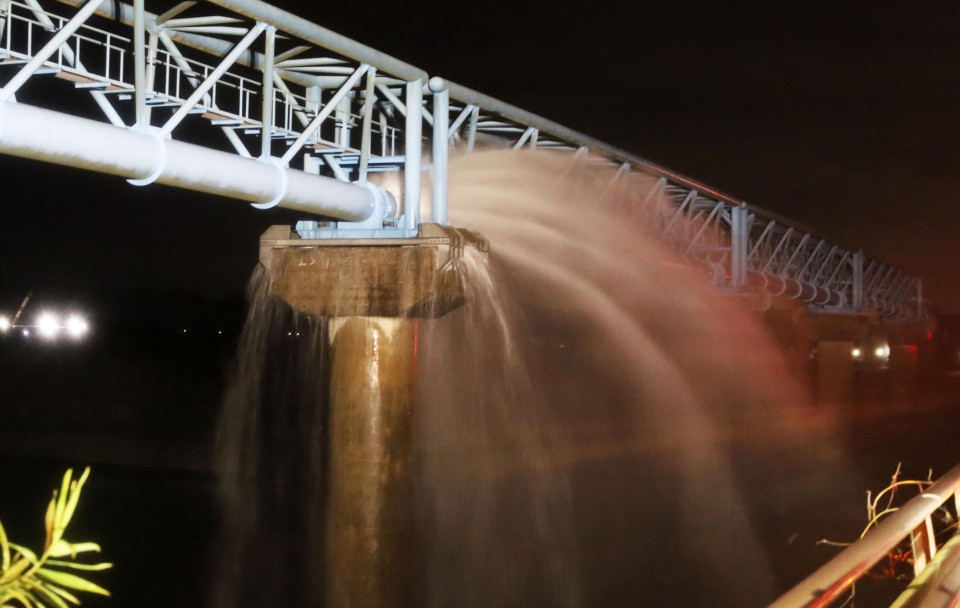 Water is seen seen gushing out of a pipeline that runs across a river in Ichihara, Chiba Prefecture, after an earthquake with a magnitude of 5.9 jolted the Tokyo region on Oct. 7, 2021. (Kyodo)

Prime Minister Fumio Kishida, whose government immediately set up a task force to respond to the quake, entered his office at around 11:20 p.m. on Thursday. He told reporters he had ordered officials to help quake victims and prevent further damage.

The quake triggered a blackout affecting about 250 households in the Japanese capital at around 11 p.m., but power was eventually restored. At JR Shinagawa Station, crew staff guided commuters around the ticket gates due to a temporarily outage.

Many train services including some bullet trains as well as subway services in the capital were suspended following the temblor but resumed operation later.

There were no reports of damage at Narita airport, east of Tokyo, while transport authorities said all four runways at Tokyo's Haneda airport had been reopened after checks following a temporarily closure.

Highways in the capital and its vicinity were also briefly closed for checks, while a fire broke out at an oil refinery facility in Sodegaura, Chiba Prefecture, that was quickly put out without causing any injuries. 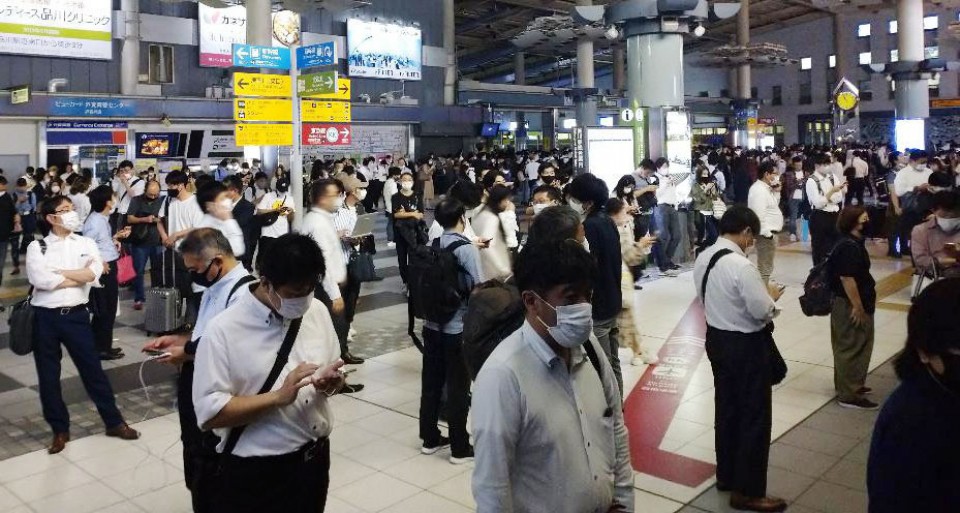 Train passengers wait outside entrance gates at JR Shinagawa Station in Tokyo after an earthquake with a preliminary magnitude of 5.9 jolted the Tokyo region on Oct. 7, 2021, leading to a power outage inside the station. (Kyodo) ==Kyodo 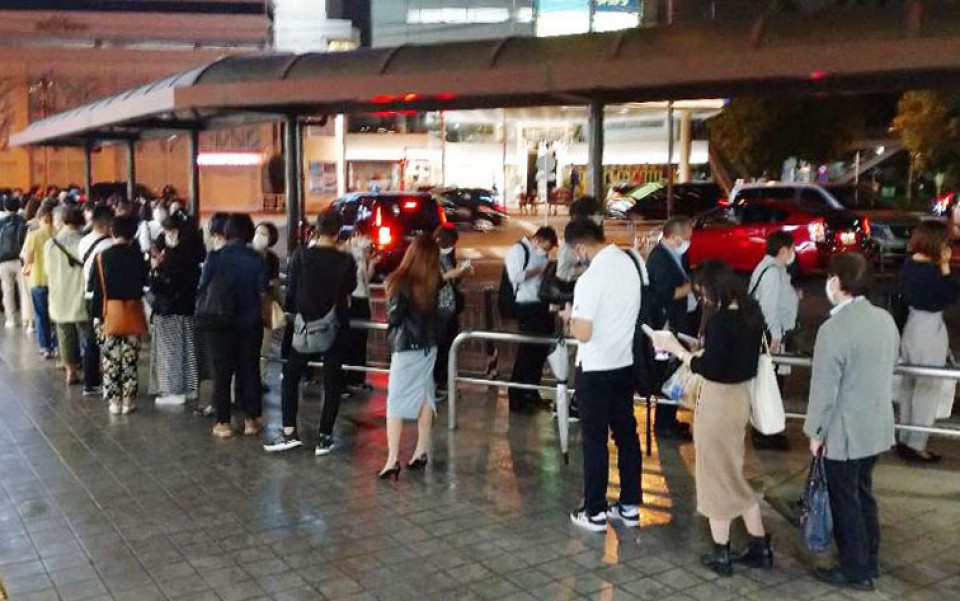 People wait for taxis in front of JR Shinagawa Station in Tokyo as train services are suspended after an earthquake with a preliminary magnitude of 5.9 jolted the Tokyo region on Oct. 7, 2021. (Kyodo) ==Kyodo