Japan's ruling Liberal Democratic Party lost one of two House of Councillors by-elections held Sunday, dealing a blow to the party and its leader Prime Minister Fumio Kishida with just a week until the general election.

The defeat in Shizuoka Prefecture was a red flag for Kishida, who took office less than a month ago promising to take stronger COVID-19 countermeasures and implement a "new capitalism" that puts the country on a growth track while redistributing wealth to the middle class.

Shinnosuke Yamazaki, a 40-year-old independent backed by the Constitutional Democratic Party of Japan and another opposition party, won a close race against Yohei Wakabayashi, 49, of the LDP. The other race in the conservative stronghold of Yamaguchi Prefecture was won by the LDP's Tsuneo Kitamura, 66. 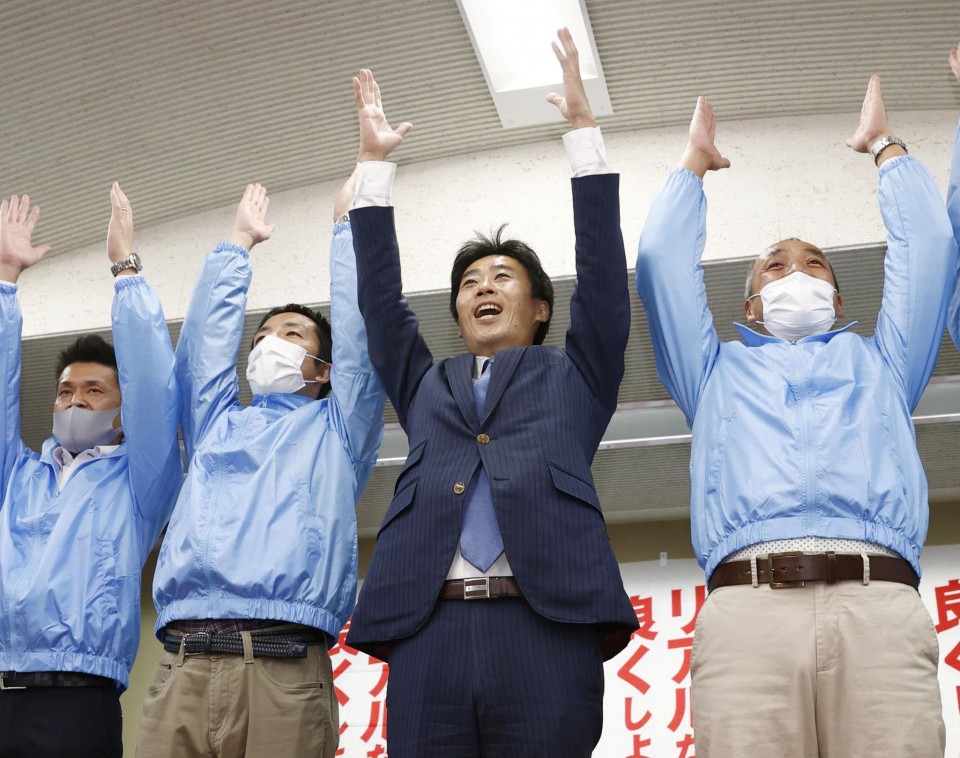 Shinnosuke Yamazaki (2nd from R), an independent backed by the Constitutional Democratic Party of Japan and another opposition party, celebrates his victory in a House of Councillors by-election in Shizuoka Prefecture on Oct. 24, 2021. (Kyodo) 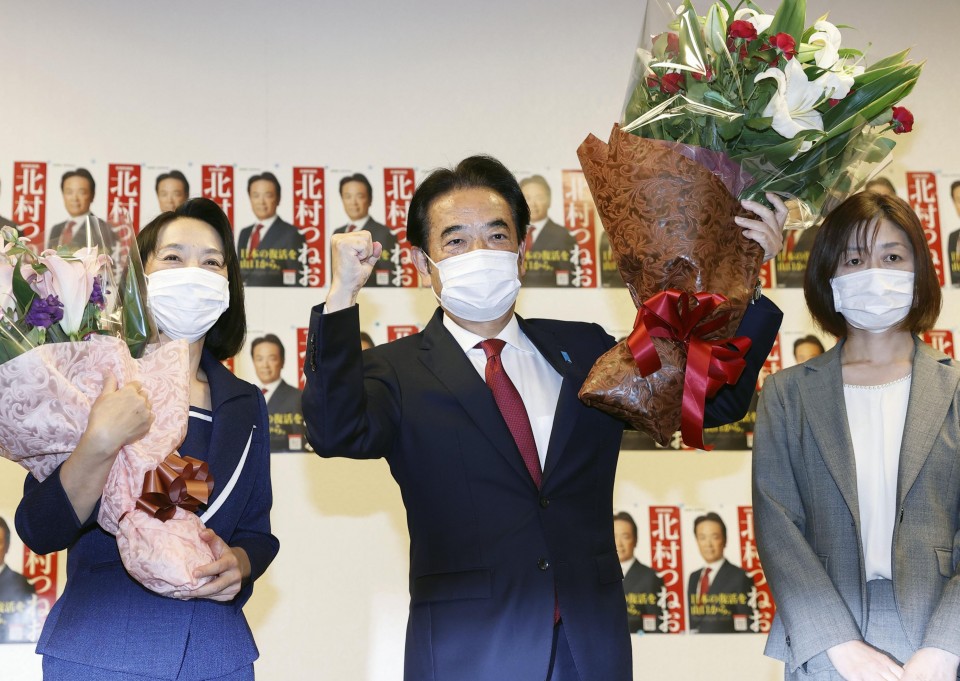 The by-elections for vacant seats in the upper chamber of parliament were the first national contests since Kishida replaced his unpopular predecessor, Yoshihide Suga, and closely watched as a bellwether for next Sunday's general election.

Media polls suggest the LDP and its coalition partner, Komeito, will retain their majority in the 465-member House of Representatives, the more powerful lower chamber.

Kishida has said such an outcome would be enough to claim a mandate for the implementation of his COVID-19 and economic policies. 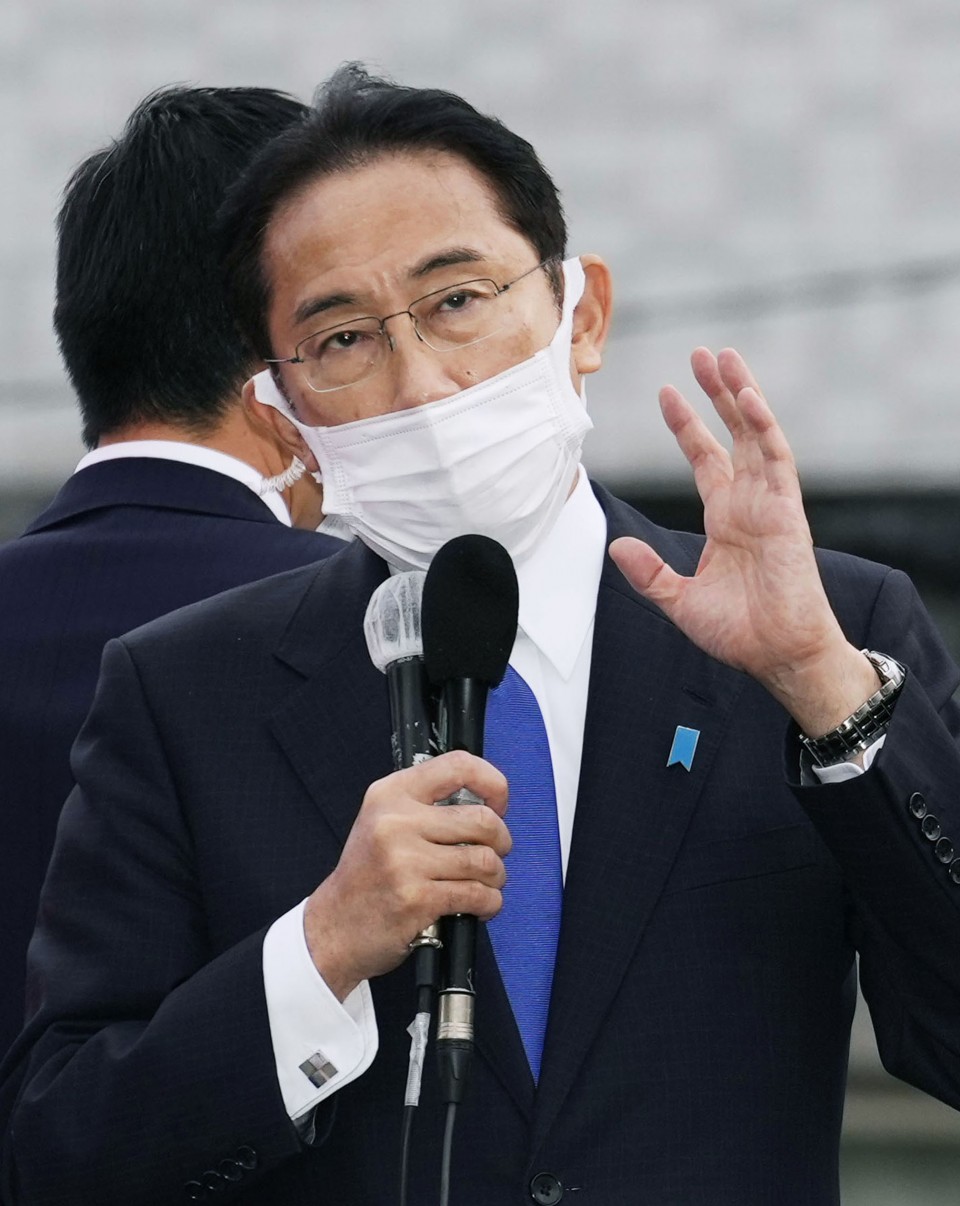 Japanese Prime Minister Fumio Kishida, head of the Liberal Democratic Party, makes a stump speech in Osaka on Oct. 24, 2021, ahead of a general election on Oct. 31. (Kyodo) ==Kyodo

"We must push forward with reforms in order to revive the Japanese economy and put it on a growth track," he said in a stump speech in Sakai, Osaka Prefecture, on Sunday.

But the LDP faces the prospect of losing seats as the CDPJ and other opposition forces have set aside their differences to consolidate candidates across hundreds of voting districts.

"We are going to make drastic changes to the government's COVID-19 response, which has been behind the curve, and move away from economic policies that have made a small group of people rich and failed to spark growth," CDPJ leader Yukio Edano told reporters on the campaign trail in Kobe.

The Shizuoka by-election was held to fill a single-member district seat vacated by the LDP's Shigeki Iwai, who made an unsuccessful bid for Shizuoka governor in June. Voter turnout was 45.57 percent, down 4.89 percentage points from the upper house election in 2019.

Yamazaki is a former prefectural assembly member while Wakabayashi was previously mayor of Gotemba. Chika Suzuki, 50, of the Japanese Communist Party also ran but failed to garner wider support.

"This is the best result imaginable," Yamazaki said as he celebrated with supporters. "There were even more people calling for politics to change than I had imagined."

Underscoring the importance of the race in the central prefecture, Kishida took time out of his whirlwind general election schedule to campaign for Wakabayashi twice in about two weeks.

"We will band together with everyone running in the general election and unite" under Kishida, LDP election strategy chief Toshiaki Endo told reporters at the party's Tokyo headquarters.

CDPJ Secretary General Tetsuro Fukuyama said the LDP's defeat in Shizuoka was "a sign of growing disappointment in the prime minister" and gave the opposition a "momentum boost" heading into the general election, the first since October 2017.

Kitamura already had an upper house seat via proportional representation but gave it up to run for the seat in the single-member district, which was vacated by former education minister Yoshimasa Hayashi to run in the general election.