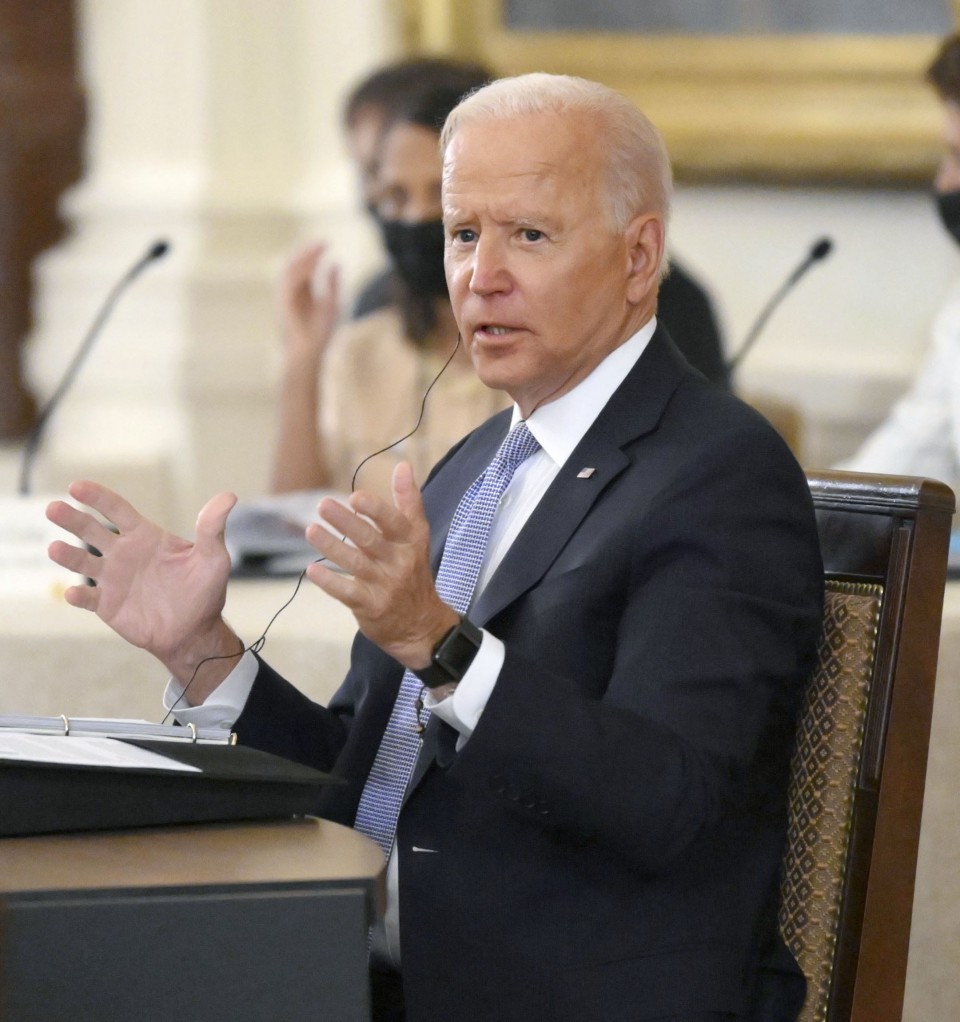 U.S. President Joe Biden speaks at a Quad summit meeting with the leaders of Japan, Australia and India at the White House in Washington on Sept. 24, 2021. (Kyodo) ==Kyodo

The United States is committed to defending Taiwan if China mounts an attack on the self-ruled democratic island, President Joe Biden said Thursday, apparently contradicting Washington's long-standing policy to keep its stance on the matter ambiguous.

His remarks came as concerns have grown over the increased pressure Beijing is applying on Taiwan, which it regards as a renegade province awaiting reunification by force if necessary. The White House said later there was no change in policy toward the island.

Asked during a town hall event organized by CNN whether the United States would come to Taiwan's defense in the event of an attack, Biden said, "Yes, we have a commitment to do that."

Biden also reiterated that he has no intention of starting a new "Cold War" with China but that he wants the world's second-largest economy to understand that the United States is "not going to step back" and "change any of our views."

Insisting that the United States remains the world's top military power, he said there is no need to worry about an increase in the military might of countries such as China. "But you do have to worry about, is whether or not they're going to engage in activities that put them in a position where they may make a serious mistake."

On Friday, China lambasted Biden's remarks, stressing that the island, ruled separately for over 70 years, is an "inalienable part of Chinese territory."

"No one should underestimate the Chinese people's strong determination, firm will and strong ability to defend national sovereignty and territorial integrity," Foreign Ministry spokesman Wang Wenbin told reporters in Beijing.

The United States should "refrain from sending any false signals to the separatist forces of Taiwan independence in order not to seriously damage Sino-U.S. relations as well as peace and stability across the Taiwan Strait," Wang added.

Ou said Taiwan will deepen cooperation with the United States and other like-minded nations to jointly advance peace, stability and prosperity across the Taiwan Strait.

The Biden administration has demanded China cease putting military, diplomatic and economic pressure on Taiwan while vowing to assist the island in maintaining a "sufficient self-defense capability" such as through arms sales.

At the same time, the U.S. government has maintained an ambiguous position regarding the use of military force in response to a Chinese attack on Taiwan, a tactic known as "strategic ambiguity."

The strategic ambiguity policy was adopted after Washington switched diplomatic recognition from Taipei to Beijing in 1979, with U.S.-Taiwan ties becoming unofficial.

The policy is intended not only to deter China from using force against Taiwan but also to deter Taiwan from seeking independence, as neither Beijing nor Taipei can feel certain the United States would intervene to defend the island should a conflict arise, according to experts.

With China appearing to become more assertive toward Taiwan, as seen through repeated intrusions of Chinese military planes into Taiwan's air defense identification zone, some lawmakers have called for clarity in U.S. policy.

Philip Davidson, when he was head of the U.S. Indo-Pacific Command before retiring earlier this year, also suggested the need to reconsider policy on the island.

"More than 40 years of the strategic ambiguity...has helped keep Taiwan in its current status. But you know, these things should be reconsidered routinely," he said during a Senate hearing in March.

But Biden's nominee to be U.S. Ambassador to China, former diplomat Nicholas Burns, told a Senate hearing Wednesday that it is best to stay with the policy that has been in place to effectively deter aggression from China across the Taiwan Strait.

In August, Biden appeared to suggest during a TV interview the United States would defend Taiwan in an invasion. A senior administration official at that time also emphasized the U.S. policy with regard to Taiwan "has not changed."

Citing the Taiwan Relations Act, a piece of U.S. legislation that governs the unofficial ties with Taiwan, the official said in a statement, "We will uphold our commitment under the act, we will continue to support Taiwan's self-defense, and we will continue to oppose any unilateral changes to the status quo."