A cat fashion designer in Indonesia has garnered attention for his many outfits that include manga and anime characters and even samurai and kimono prototypes as he eyes taking his business to Japan and beyond.

Fredi Lugina, a former schoolteacher turned cat outfit tailor, thinks his fashions will be well received in Japan because of the country's penchant for pampering pets, including taking them out to cat cafes, and a culture that worships all things cute. 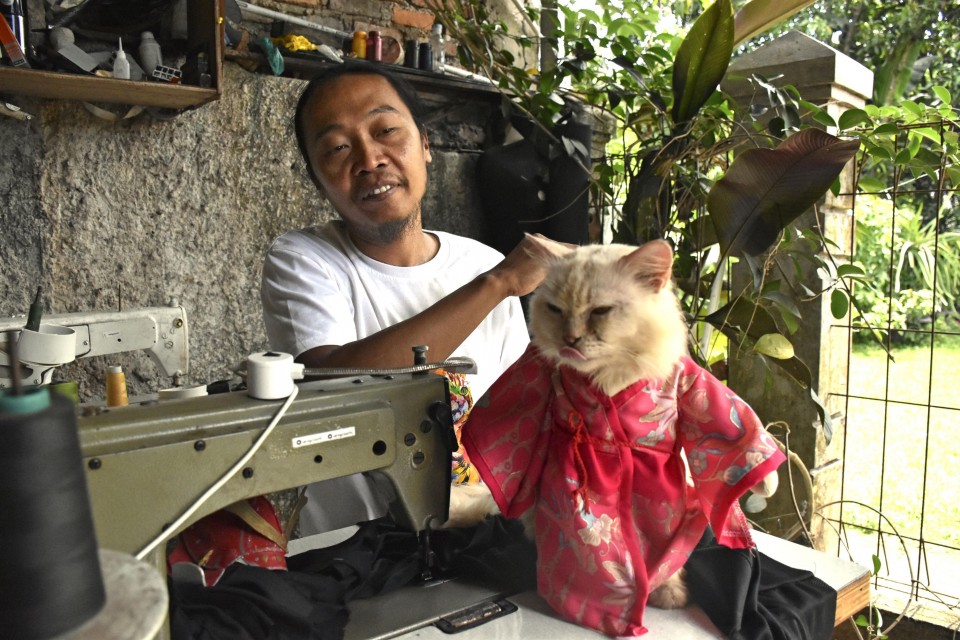 Already gaining millions of likes for his photos and videos featuring his model cats wearing colorful designs posted on social media, Fredi has longed to see what Japan's cat lovers think of his "haute couture" because of the country's image as a global fashion trendsetter, he says.

"I think Japan is a mecca for the world's pet cat lifestyle with its cat cafes and restaurants," the 40-year-old said.

He said Japan had been the inspiration for dozens of outfits, from simple creations to more intricate clothing designs featuring superheroes and popular online game characters. Viewed from the front, cats dressed in the costumes, which also feature arm appendages, look almost human.

"To Japan, I offer many variations of unique, good quality cat clothing at competitive prices," he said during a recent interview at his bungalow studio in Bogor, a city in the West Java province of Indonesia, operated only by himself and his two younger brothers using nine sewing machines.

His unique cat designs have attracted a growing international clientele, including from Malaysia, the Philippines, Thailand, and the United States.

Fredi sells around five to 10 items a day, with prices ranging from 33,000 ($2.30) to 220,000 rupiah. He typically earned about 1.20 million rupiah per month before the pandemic, but demand among cat owners staying home due to COVID-19 has surged, with sales jumping three to five times higher than before.

The domestic market still makes up the bulk of his sales, but he recently has seen more overseas buyers.

Fredi took a sewing course when he was in college. As a child, he had taken an interest in needlework while watching his mother stitch clothing together on her sewing machine.

After making cat outfits as more of a hobby, he decided to pursue it full time, quitting his job as an elementary school teacher in 2017 and deciding to open a tailor shop for cat clothing. Coaxed by his older brother, Fredi began selling his cat lineup online in 2018, and the outfits started gaining popularity on social media.

But Fredi has also faced criticism from pet owners who think cats should not be dressed in such attire. He agrees that cats should never be forced to don the outfits and only wear them for short periods. Only three of his seven cats show no reluctance to wearing the costumes, he says.

This year, to celebrate Eid al-Fitr, a major Muslim holiday, Fredi designed a costume called "Pak Haji," resembling clothing commonly worn by local Muslim men after completing a Haj pilgrimage to Mecca. With nearly 90 percent of Indonesia's population comprising believers of Islam, it is no wonder the design is among his best sellers.

"Celebrating holidays, cat lovers are (now) not only dressing up themselves but also their cats," he said, adding that he usually hires more workers during the holiday seasons to respond to increased demand.

Fredi says he considers his samurai outfit with its intricate attention to detail, complete with a "miniature sword" and "metal helmet," one of his masterpieces.

"A cat lover already offered to buy it from me for a handsome price, but I still don't want to let it go," he said with a laugh.

Unlike the samurai attire, the ready-to-wear kimono costumes are simpler and come in various bright colors, including pink, the most popular.

Fredi said he dreams of holding a cat clothing exhibition in Japan and elsewhere in the world once the pandemic ends. 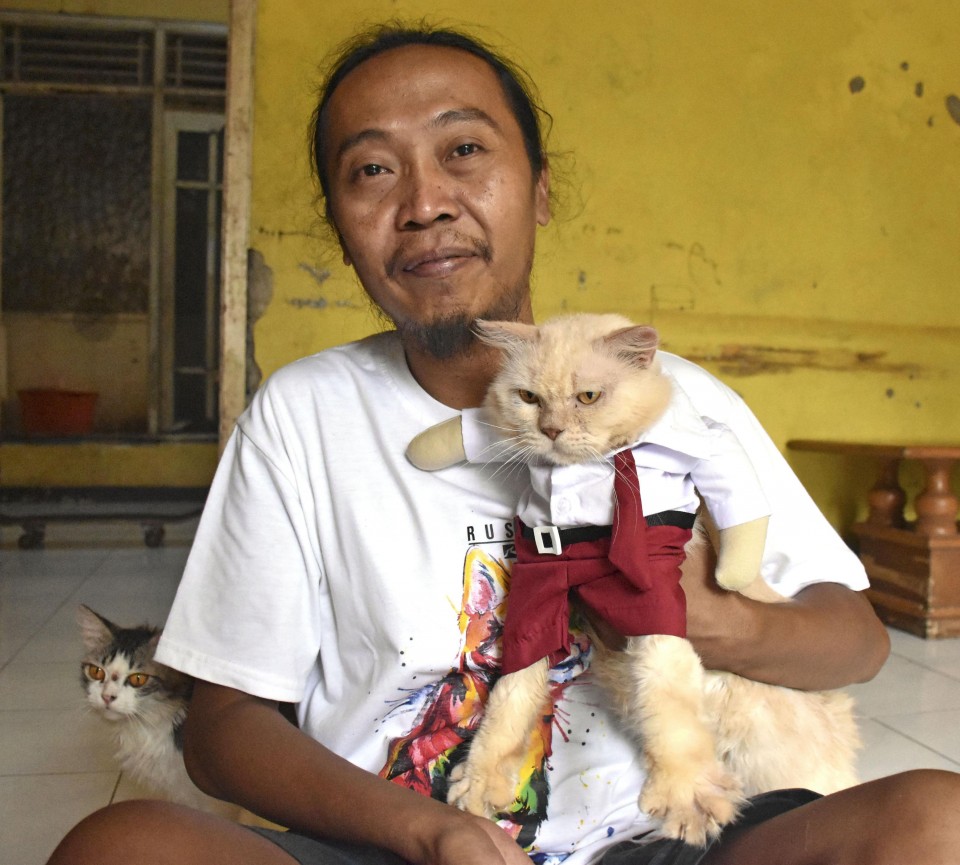 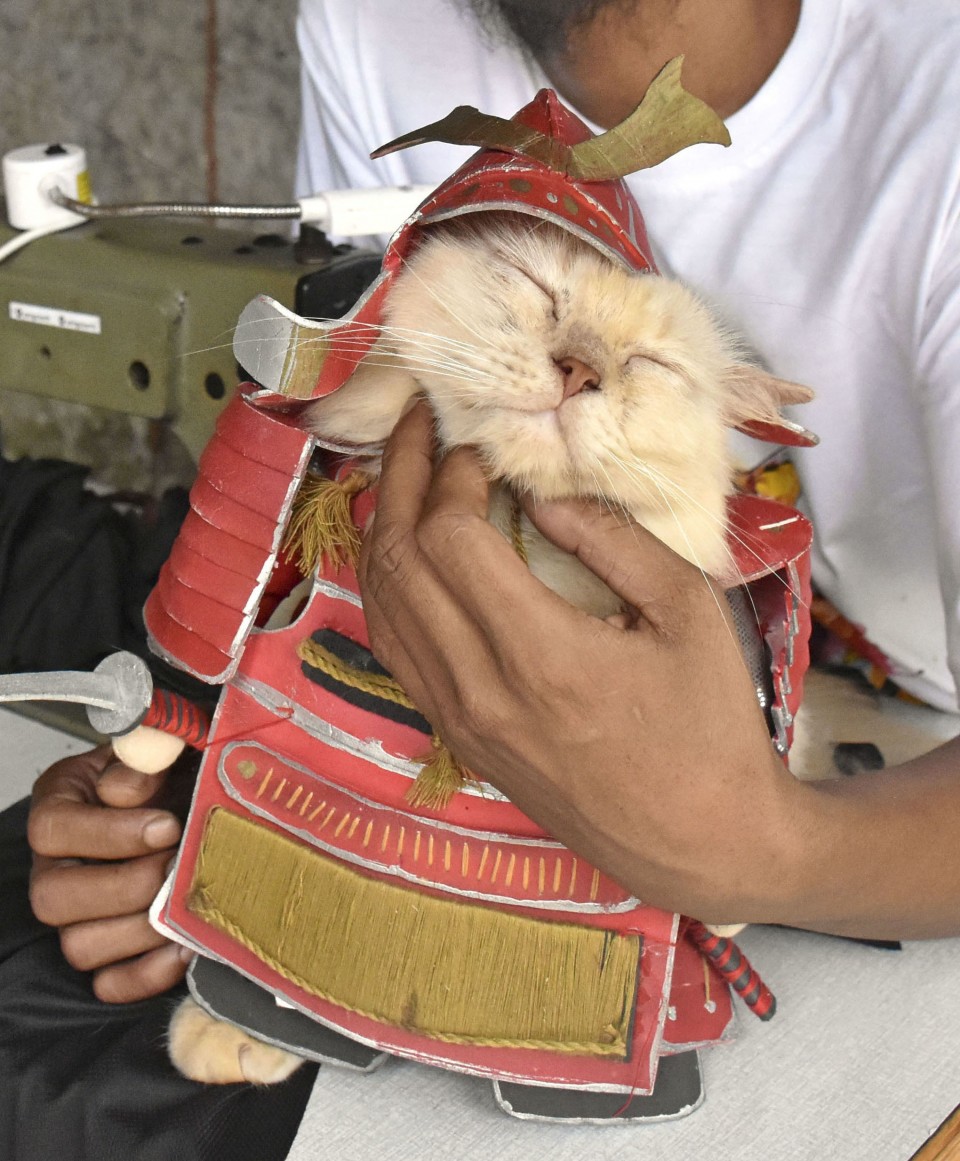