People from India and Bangladesh staged a protest in Tokyo on Sunday, calling for the safety of the Hindu minority in the Muslim majority nation.

Around 60 demonstrators gathered near the Bangladeshi Embassy, holding placards with messages including "Stop Communal Attack" and "Justice for Bangladesh Minority" and chanting slogans such as "We want justice." 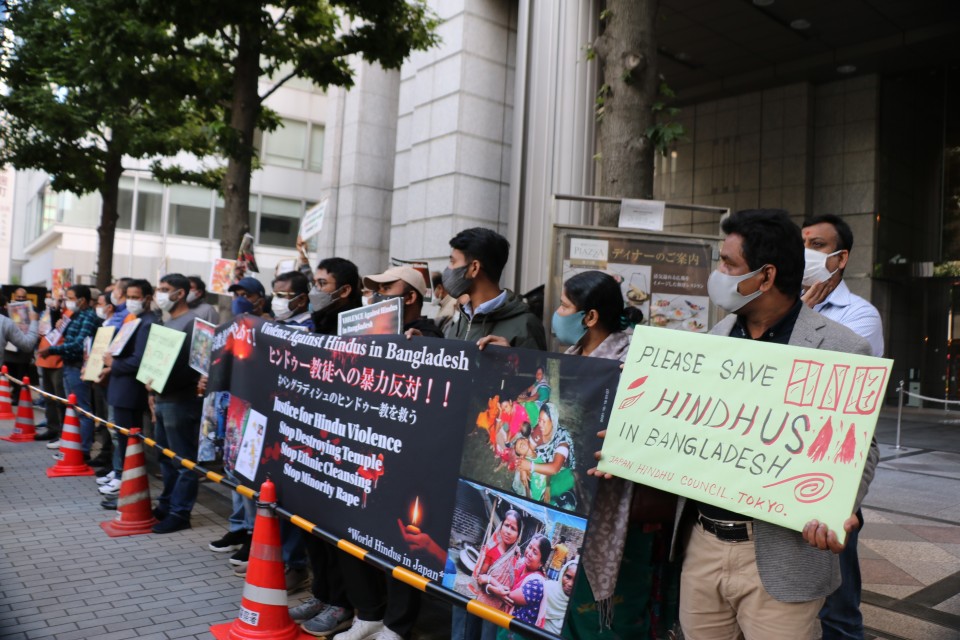 Photo shows protesters near the Bangladeshi Embassy in Tokyo on Oct. 24, 2021. (Kyodo)

In mid-October, communal riots broke out in Bangladesh after a mob vandalized a Hindu temple in Cumilla in its eastern part. The first attack occurred as images of a copy of the Quran kept near a Hindu deity at the temple went viral on social media.

After the incident, more Hindu temples and houses were vandalized, leaving scores of people injured and some dead in the chaos that went on for around a week, according to local media reports.

"Similar protests took place in around 150 countries including India, Bangladesh and the United States," said Tokyo-based Rohan Agrawal, an Indian national, who was at the scene of the demonstration staged by organizations including the International Society for Krishna Consciousness.

"We demand equal rights and an end to such attacks against all the religious minorities in Bangladesh," said Nandy Khokan Kumar, one of the protesters, who is originally from Bangladesh but currently resides in Japan and runs a trade firm in Tokyo.

Anil Sarkar, a Bangladeshi Hindu, said, "I am scared for my family back home."

Bangladeshi Prime Minister Sheikh Hasina has criticized the attacks and hundreds protested in the country's capital Dhaka last week against religious violence. Local authorities have made some arrests.

Hindus account for less than 10 percent of the overall population in Bangladesh.