Finance chiefs from the Group of 20 major economies endorsed Wednesday a global minimum corporate tax rate of 15 percent and other new rules to address tax avoidance by IT giants, while vowing to act as necessary over rising inflation rates.

The plan for the once-in-a-century corporate tax reform crystallized through international negotiations at the Organization for Economic Cooperation and Development, with the G-20 members welcoming in their joint communique the establishment of "a more stable and fairer" global tax regime.

"We have achieved a final political agreement on all the elements" of the issue, Italian Economy and Finance Minister Daniele Franco told a press conference. Italy holds the rotating G-20 presidency this year. 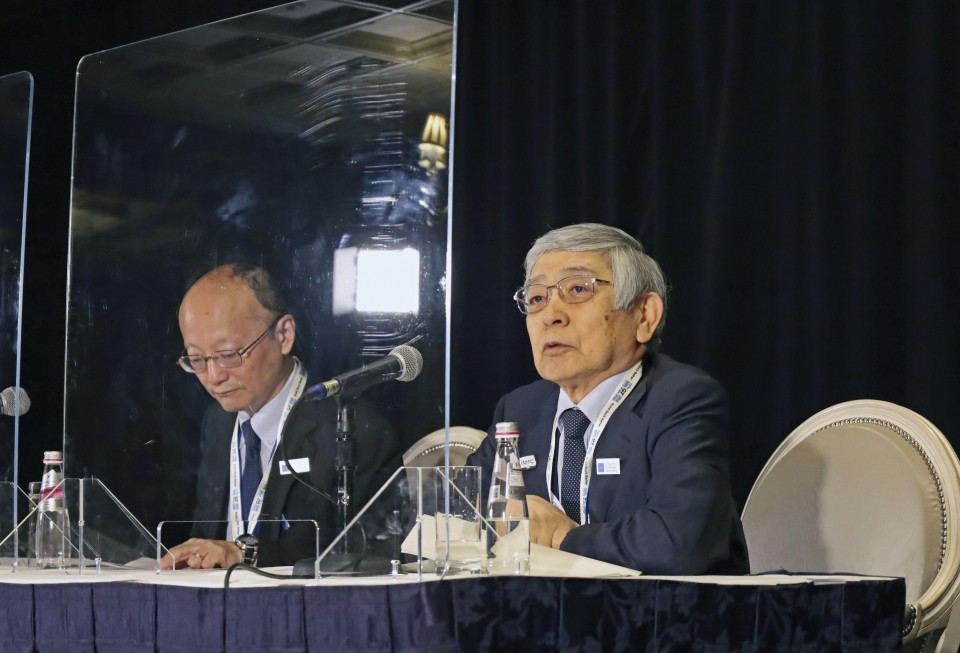 Bank of Japan Governor Haruhiko Kuroda (R) and Masato Kanda, Japanese vice finance minister for international affairs, attend a press conference in Washington after a meeting of finance chiefs from the Group of 20 major economies on Oct. 13, 2021. (Kyodo) ==Kyodo

On the current state of the global economy, the G-20 finance ministers and central bank governors affirmed that recovery from the coronavirus pandemic-induced sharp downturn "continued at a solid pace," underpinned by the rollout of COVID-19 vaccines and policy support.

But they noted that the pickup in economic activity has been highly divergent across countries and remains exposed to downside risks, touching on the possible spread of new coronavirus variants and uneven timelines for vaccination efforts.

"We will continue to sustain the recovery, avoiding any premature withdrawal of support measures," the G-20 members said in the communique, while adding that central banks are "monitoring current price dynamics closely" and will "act as needed to meet their mandates, including price stability."

With demand accelerating on the back of eased virus restrictions but supply slow to respond amid disruptions stemming from the pandemic, the United States and some emerging market economies have seen rising inflation, according to the International Monetary Fund.

Although price pressures are expected to subside in most countries in 2022, inflation prospects are highly uncertain, the IMF warned in its latest World Economic Outlook report.

The G-20 meeting was held in Washington on the sidelines of the annual fall gatherings of the IMF and World Bank. The group's agreement will be reported at a G-20 summit meeting at the end of this month in Rome.

Japan was represented by officials including Bank of Japan Governor Haruhiko Kuroda. Finance Minister Shunichi Suzuki, who assumed the post upon the launch of Prime Minister Fumio Kishida's Cabinet on Oct. 4, missed the event to attend a parliamentary session.

The gathering took place after 136 economies, in OECD-led talks, signed on last Friday to introduce in 2023 a 15 percent global minimum corporate tax rate and a system to require multinational companies to pay their "fair share" in levies wherever they operate and generate profits.

Momentum for setting new universal taxation rules for businesses operating across borders has been increasing in recent years amid mounting criticism that major U.S. tech companies such as Google LLC and Apple Inc. book profits in low-tax jurisdictions.

The global minimum tax agreement is projected to generate around $150 billion in new revenues annually, according to the OECD.

The governments joining the deal, including several low-tax jurisdictions that had initially resisted, such as Ireland and Hungary, are slated to formulate a multilateral treaty next year, while preparing for necessary revisions of domestic laws and regulations to put the new rules into practice in 2023.

The G-20 finance chiefs also reaffirmed in their communique their commitment to ensuring "equitable and affordable" access to coronavirus vaccines, as unequal distribution continues to overshadow the recovery prospects of lower-income countries.

"We will strive to help address the bottlenecks and shortages of COVID-19 tools in low- and middle-income countries over the coming months," the document said.

After the G-20 talks, the finance chiefs of the Group of Seven economies agreed on a common set of guiding principles for central bank digital currencies that called for issuing countries to ensure transparency and privacy protection.

The move by the G-7 members -- Britain, Canada, France, Germany, Italy, Japan and the United States as well as the European Union -- comes as China is taking the lead in issuing CBDC, with its pilot program to develop a digital yuan already under way.

"We reaffirm that any CBDC should be grounded in our long-standing public commitments to transparency, the rule of law and sound economic governance," the G-7 finance chiefs said in a statement issued after their meeting.

Critics have expressed concerns that China's rollout of a CBDC may allow stronger state surveillance of its economy and people such as through the collection of big data on private financial transactions.