Shohei Ohtani has rightfully earned accolades for his incredible 2021 season, but the Los Angeles Angels two-way sensation owes some of his success to a handful of helpers working tirelessly behind the scenes.

Throughout the season, expected to culminate with Ohtani winning American League MVP, these dedicated support staffers have strived to help the 27-year-old Japanese who is shaking up baseball become the best version of himself. 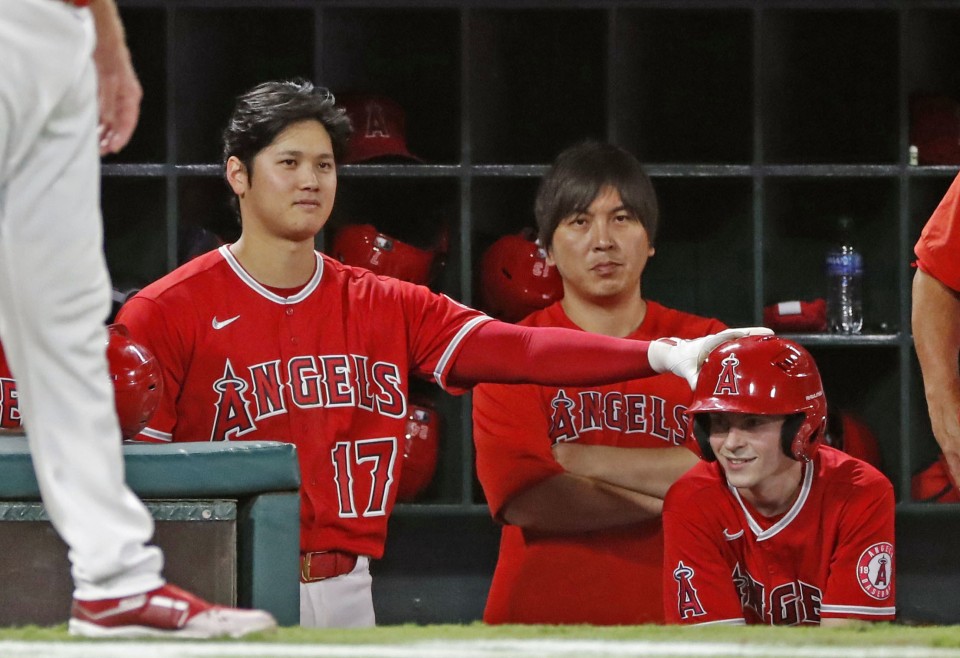 Shohei Ohtani (L) of the Los Angeles Angels and his interpreter Ippei Mizuhara (C) looks on from the dugout during a game in Anaheim on Sept. 22, 2021. (Kyodo)

Chief among them may be interpreter Ippei Mizuhara, who has had moments under the spotlight since being hired by the Angels following their December 2017 signing of Ohtani.

Mizuhara famously carried a backpack full of weighted plyo balls every day for Ohtani to use in warm-ups. Standing behind Ohtani with a radar gun, he would clock each throw by the player as he tossed balls of different weights against a wall.

The Japan-born, U.S.-raised Mizuhara prepared videos that Ohtani watched on the bench during games to study opposing pitchers he would face at the plate.

Mizuhara relayed messages between the Angels coaching staff and Ohtani as part of his most important task -- ensuring that the player understood what was said to him, and was understood in turn.

Far more than just an interpreter, Mizuhara has been involved in seemingly every aspect of Ohtani's preparation, play, recovery and media appearances.

From postgame press conferences to mound visits, anywhere Ohtani went, Mizuhara was not far away. He even served as Ohtani's All-Star Home Run Derby catcher.

Shohei Ohtani (R) of the Los Angeles Angels pitches in the bullpen while his interpreter Ippei Mizuhara (L) and Angels pitching coach Matt Wise look on on Sept. 19, 2021, in Anaheim. (Kyodo)

Birch curated a constant Twitter stream of facts and historical stats related to Ohtani's notable feats that informed fans and provided stories for the media.

Seemingly every other day, tweets would reveal how Ohtani had become the first player to accomplish one feat or another.

Birch has led Ohtani versus Babe Ruth comparisons, promoted him as an MVP candidate and helped drive the Ohtani fever that gripped America during the season.

"A look at some of Shohei Ohtani's historical accomplishments this season for the #Angels," he tweeted on Saturday, with a long list of the player's firsts in baseball.

With Ohtani taking his regular turn starting in a six-man rotation and batting as a designated hitter, even on the days before and after he pitched, Angels pitching coach Matt Wise made sure his health came first.

Wise allowed Ohtani to opt out of team training sessions and was flexible with his schedule because he was doing "what no one has ever done before."

Jeremy Reed monitored Ohtani's 15-minute hitting practice every day. As the Angels hitting coach, his responsibility was to help hitters like Ohtani maintain confidence to find success in the batter's box.

Mizuhara, Birch, Wise and Reed are just some of the supporting cast which brought out the best in Ohtani.

This year in MLB has more or less been the Ohtani show, the superstar putting on a historic individual performance while trying to keep the struggling Angels afloat in the American League West.

Throughout it all, Ohtani has continually credited those around him for the support provided. Better than anyone, the player himself knows how important they have been to his success in this outstanding season.