People wished Japan's Princess Mako well Tuesday after she finally married her university boyfriend Kei Komuro following a years-long postponement, but the celebratory mood was muted as a Komuro family financial dispute has yet to be resolved.

Hoping to catch a glimpse of the princess, about 100 members of the media as well as a group of well-wishers gathered in front of her family's imperial residence in the Akasaka Estate. The princess left the residence around the same time that the couple's marriage was registered, with the Imperial Household Agency submitting the legal paperwork Tuesday morning. 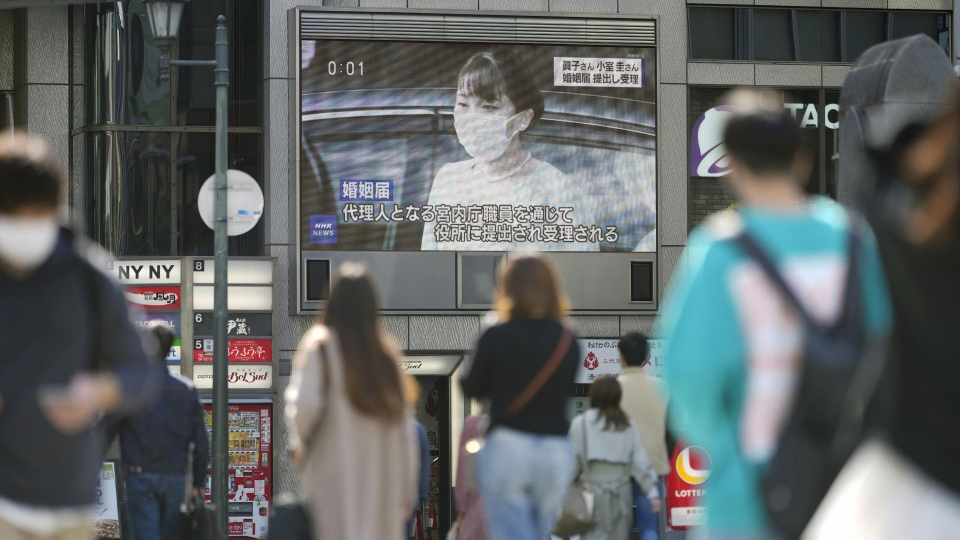 "Now that she can finally live together with the person she loves, I want her to enjoy her own life without any restrictions," said Maki Sato, a 50-year-old nurse who came from Kisarazu, Chiba Prefecture, to see the princess at the residence.

"I want the couple to overcome any hardships together," she said. The two are expected to start a new life in New York, where Komuro works at a law firm.

As the niece of Emperor Naruhito forfeited her imperial status upon marrying a commoner and became Mako Komuro under his family registry, the word "Mako-san" became the top trending word on Twitter in Japan.

In Japanese, "san" is a common suffix attached to the end of names, typically used between people with equal status of any age.

"Kei Komuro-san, if you really love Mako-san, I'm sure you could have handled things much differently," an anonymous person said in a Twitter post.

A 50-year-old woman in Hokkaido, Japan's northernmost main island, said she wishes for Princess Mako's happiness but cannot be entirely happy about the couple's marriage as the money dispute remains unsolved. "I find it hard to say 'congratulations' with confidence," she said.

Hours before the couple held a press conference at a Tokyo hotel, police officers were on high alert as they restricted traffic to ward off any disruption or protest.

As the princess arrived at the hotel in a car, she opened the window and waved at those gathered as they shouted congratulations to her from the roadside.

Yoko Endo, a 50-year-old from Yokohama, said she is "happy for Princess Mako even though I couldn't see her with a beautiful ancient hairstyle," referring to the lack of pomp usually seen in traditional ceremonies associated with a royal marriage.

Under normal circumstances, royal brides wear a kimono and tie their hair in an ancient style reserved for noblewomen, but such rites were skipped in light of public outcry surrounding the financial dispute between Komuro's mother and her former fiance.

"I want Mr. Komuro to really protect her," Endo said.

Some people even gathered in front of the hotel to watch the online streaming of the press conference on their smartphones. Among them was Tomohiro Katsuta, 31, who came from Fuji, Shizuoka Prefecture in central Japan.

"I felt a strong will in (Princess Mako's) expression. From now on, I'd like to watch over the couple quietly," Katsuta said. "I'm very sorry that there is no celebratory mood" as the wedding rites were skipped.

An 80-year-old woman who waited outside to catch a glimpse of the bride was teary, saying, "Thinking about four years leading up to (the marriage) today, I get emotional." The couple were unofficially engaged in 2017.

"I would like to extend my very best wishes for many more years of happiness and greater prosperity to the imperial family," he said.