Japan's Nikkei stock benchmark ended lower Wednesday, extending its losing streak to eight days for the first time since July 2009, as sentiment was hurt by deepening uncertainty over the global economic recovery amid higher oil prices and the prospect of rising inflation in the United States. 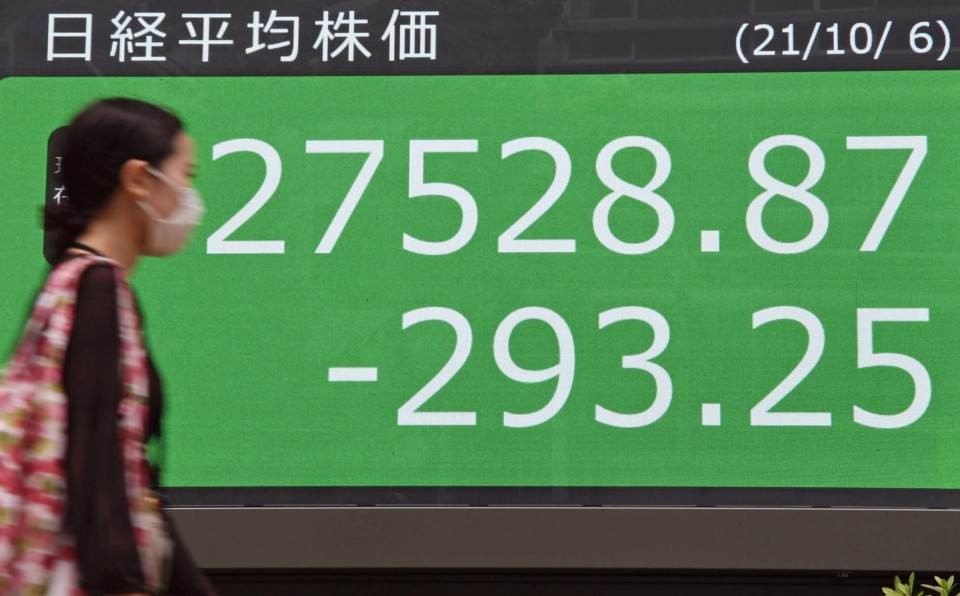 The U.S. dollar inched up into the upper 111 yen range as the unit was bought on speculation a rise in U.S. Treasury yields would cause the interest rate gap between the United States and Japan to widen, dealers said.

The yield on the benchmark 10-year Japanese government bond rose 0.020 percentage point from Tuesday's close to 0.080 percent, its highest level since early June, led by an overnight rise in U.S. counterparts after a surge in oil prices fueled concerns regarding inflation. Bond yields move inversely to prices.

Tokyo stocks were initially higher, tracking gains on Wall Street the day before. But they later fell into negative territory also on lingering worries about the debt-laden Chinese property developer Evergrande Group and the lack of agreement in the U.S. Congress over the country's debt ceiling, brokers said.

"The market's fall comes amid an absence of fresh trading cues, although the ongoing climb in oil prices was a negative factor for the market, as its rise is expected to squeeze corporate profits," said Koichi Fujishiro, a senior economist at Dai-ichi Life Research Institute.

Maki Sawada, a strategist at Nomura Securities Co.'s investment content department, said the market may remain bearish until numerous external factors revolving around the United States and China are resolved.

On the First Section, advancing issues outnumbered decliners 1,073 to 1,015, while 95 ended unchanged.

Bucking the downward trend, energy-related shares were notably higher after West Texas Intermediate crude oil futures continued to rise and closed at $78.93 per barrel overnight, the highest finish since October 2014.