The agency also revealed that Princess Mako, a niece of Emperor Naruhito, has been feeling unwell since around 2018 and had been diagnosed with complex post-traumatic stress disorder caused by what she described as psychological abuse of the couple and their families.

The agency said the princess and Komuro, both 29, will hold a joint press conference on the day they are married to explain their feelings. The two are expected to register their marriage before relocating to the United States, where Komuro works for a law firm. 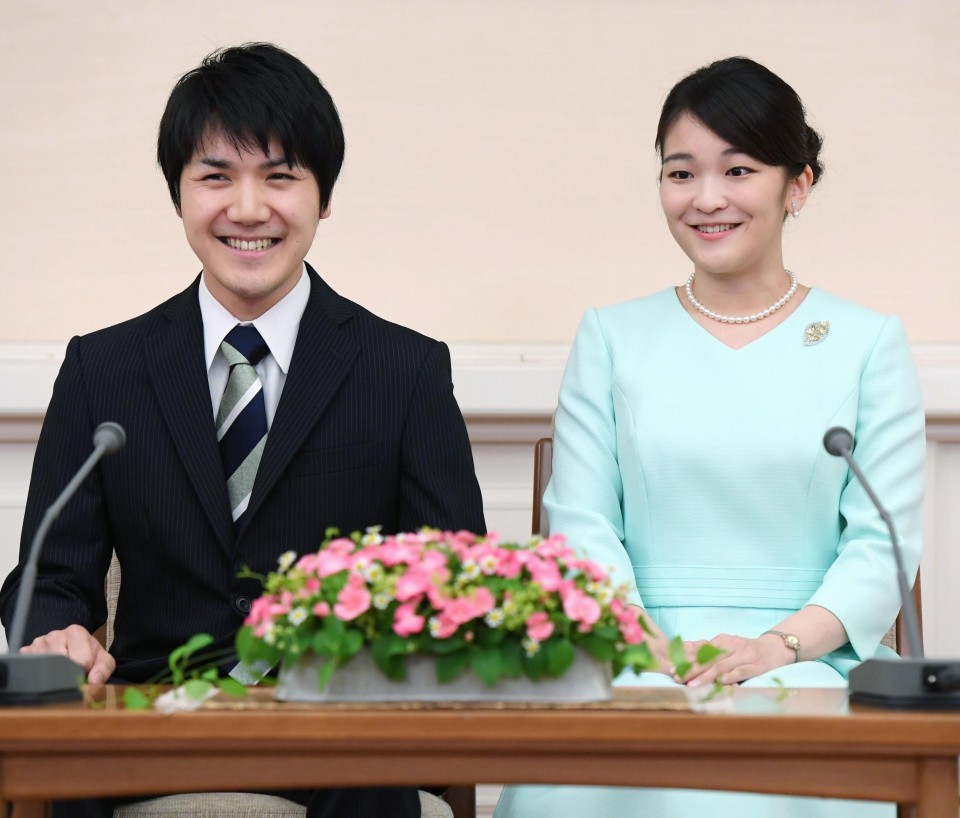 In a rare decision, traditional ceremonies associated with imperial family members' weddings, such as the official engagement ceremony called "Nosai no Gi," will not be held in view of the controversy.

Many people remain unconvinced by Komuro's explanations about the money dispute between his mother and her former fiance and feel uncomfortable about negative reports on the Komuro family, believing they are unfit to become relatives of the royals including Prince Hisahito, the princess' younger brother who is second in line to the throne.

Reflecting that attitude, the couple have often been subjected to derogatory comments on social media. Complex PTSD develops in response to prolonged and repeated experience of trauma including verbal abuse and cyberbullying, according to Tsuyoshi Akiyama, a psychiatrist who diagnosed the princess.

While female imperial family members traditionally receive a lump-sum payment of up to around 150 million yen ($1.3 million) in taxpayers' money upon their departure from the household, the agency said it has accepted Princess Mako's unprecedented request not to receive such payment.

Under the current rules, female imperial family members lose their royal status upon marrying commoners. The payments are intended to maintain the dignity of former royal family members.

Princess Mako will be the first female royal in postwar Japan not to receive the payment and to marry a commoner without the traditional rituals. 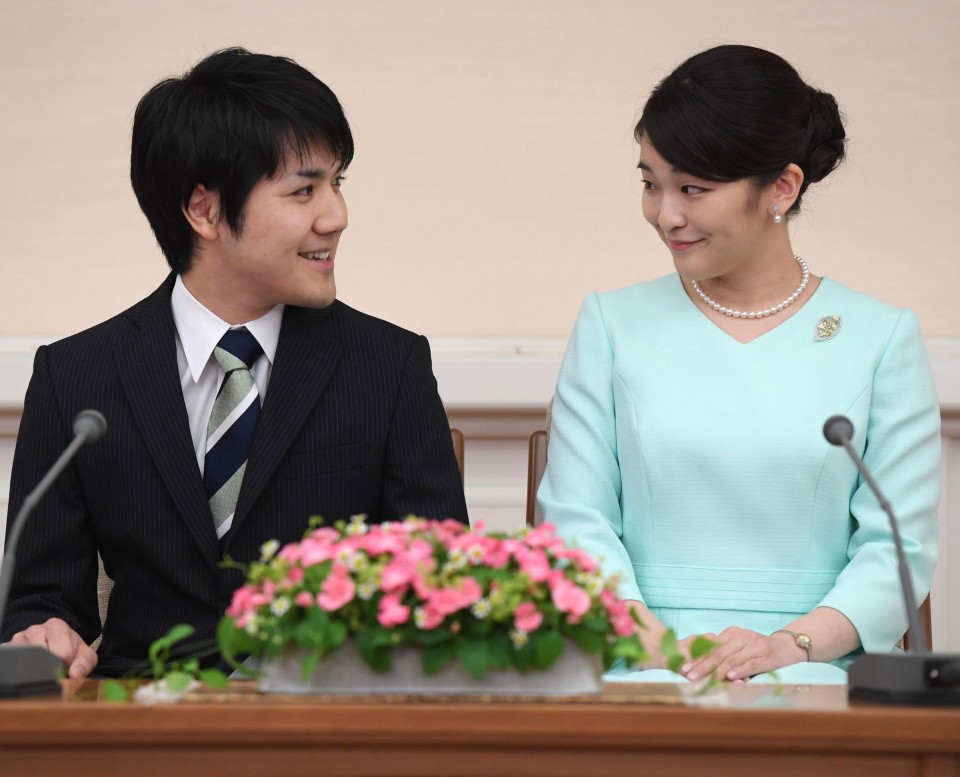 In lieu of the rites, the princess will meet with Emperor Naruhito and Empress Masako and visit the Imperial Palace Sanctuaries, which enshrine the family's ancestors, by herself without Komuro's presence. She also plans to meet with her grandparents -- former Emperor Akihito and former Empress Michiko.

The details of the arrangements for the marriage between the princess, the eldest daughter of Crown Prince Fumihito, and Komuro were announced by senior agency official Takaharu Kachi, an aide to the crown prince and his family.

The unprecedented decisions come as the crown prince maintains the view that the marriage is not supported by many Japanese people and therefore the traditional ceremonies cannot be held. A close friend of the crown prince said not allowing the rites to take place is "almost equal to disowning Princess Mako" for him.

The princess' father said in November last year, however, he approves of the couple tying the knot based on the Constitution that states marriage shall be based only on the mutual consent of both sexes. 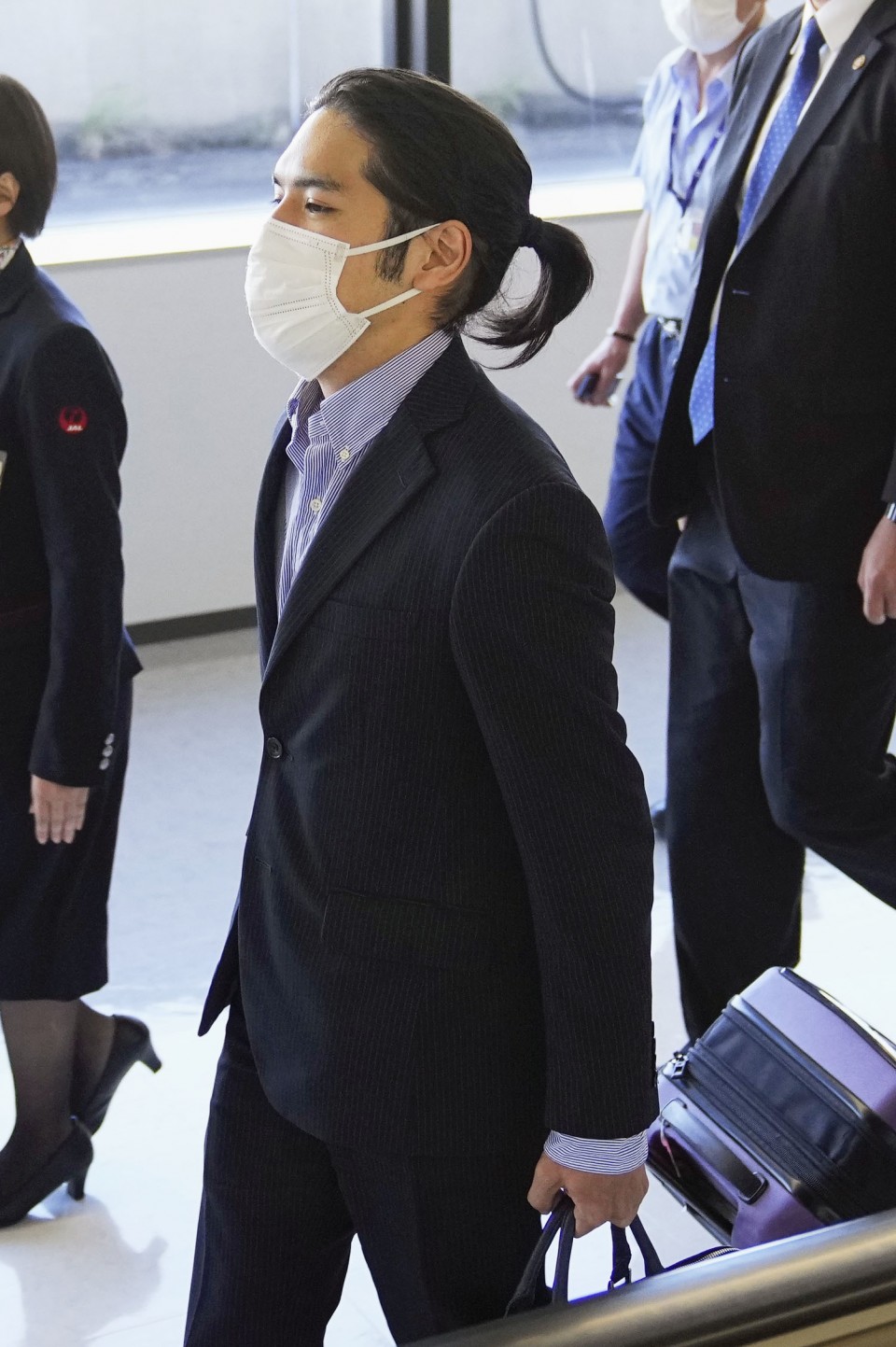 Kei Komuro, the boyfriend of Japanese Princess Mako, arrives at Narita airport near Tokyo on Sept. 27, 2021, after a flight from New York. The couple is preparing to marry. (Kyodo) ==Kyodo

Yasuhiko Nishimura, grand steward of the agency, said Friday that Emperor Naruhito and Empress Masako "wish that (the couple) will have a happy life in the future."

The empress, who is an aunt of Princess Mako, has long suffered from a stress-induced illness since giving birth in 2001 to the couple's only child Princess Aiko, amid pressure to produce a male heir.

Despite a shrinking number of heirs, the 1947 Imperial House Law limits inheritance of the Chrysanthemum Throne to a male imperial family member who has an emperor on his father's side.

Following the announcement of the princess' marriage arrangements, top government spokesman Katsunobu Kato told a press conference Friday, "I would like to extend my sincere wishes for a long and happy life to the princess and the further prosperity of the imperial family."

Meanwhile, the Japanese public expressed a mixed reaction, with some rejoicing at the news while others expressed concern that the financial dispute involving the Komuro family remains unresolved.

Since Japanese imperial family members do not have passports, the princess needs to first create a family registry with Komuro as an ordinary citizen before applying for her passport.

Faced with intense public scrutiny, Komuro in April issued a statement detailing the dispute involving his mother, who allegedly owed her former fiance over 4 million yen in financial support, including the money she spent on Komuro's education.

Shortly after releasing the statement, Komuro offered to clear the alleged debt in an effort to settle the row, even though he and his mother believe the money they received was a gift. Komuro's lawyer said his client intends to talk with the former fiance and is arranging how to facilitate that.

With his long hair tied back in a ponytail, Komuro arrived at Narita airport, near Tokyo, on Monday for the first time in three years since he left for New York in August 2018 to study at Fordham University's law school, from which he graduated with a Juris Doctor degree in May this year.

His return attracted huge media attention, with his new hairdo and demeanor such as keeping silent with the press hitting headlines. A throng of reporters gathered outside his mother's home in Yokohama near the capital where he has since been self-isolating as required by the country's coronavirus quarantine rules.

Their wedding was initially scheduled to take place on Nov. 4, 2018, but the agency announced in February the same year the postponement of ritual ceremonies following reports about the financial dispute.

In November last year, Princess Mako expressed her wish to go ahead with the wedding, saying it is a "necessary choice" for the couple.

The following is a chronology of major events related to the planned marriage between Princess Mako and her commoner boyfriend Kei Komuro.

Feb. 6, 2018 -- Imperial Household Agency announces wedding will be postponed following reports of a money dispute between Komuro's mother and her former fiance.

Jan. 22, 2019 -- Komuro says in a statement his family believes financial issues behind dispute have already been resolved.

Nov. 13, 2020 -- Princess Mako says in a statement she and Komuro think marriage is a "necessary choice" for them.

November -- Crown Prince Fumihito says he "approves" of marriage, but reiterates dispute should be solved.

April 8, 2021 -- Komuro releases a new statement detailing the dispute, expressing his resolve to tie the knot with Princess Mako.

April 12 -- Komuro expresses his intention to pay money to his mother's former fiance to settle dispute.

May -- Komuro graduates from Fordham University's law school in New York with a Juris Doctor degree.

Sept. 27 -- Komuro returns to Japan to prepare for the marriage registration.