For the first time in his pro career, the brakes came off a fit Shohei Ohtani, and the Los Angeles Angels' star showed the world his long-pursued prowess as a two-way player. But some doubters are still calling his performance a fluke.

Twenty years after Ichiro Suzuki became the first Japanese player to be named Most Valuable Player in a U.S. major league, Ohtani is the favorite to be the second after an unparalleled season in which he was one of the best offensive players and a first-rate pitcher in nearly a full-time role. 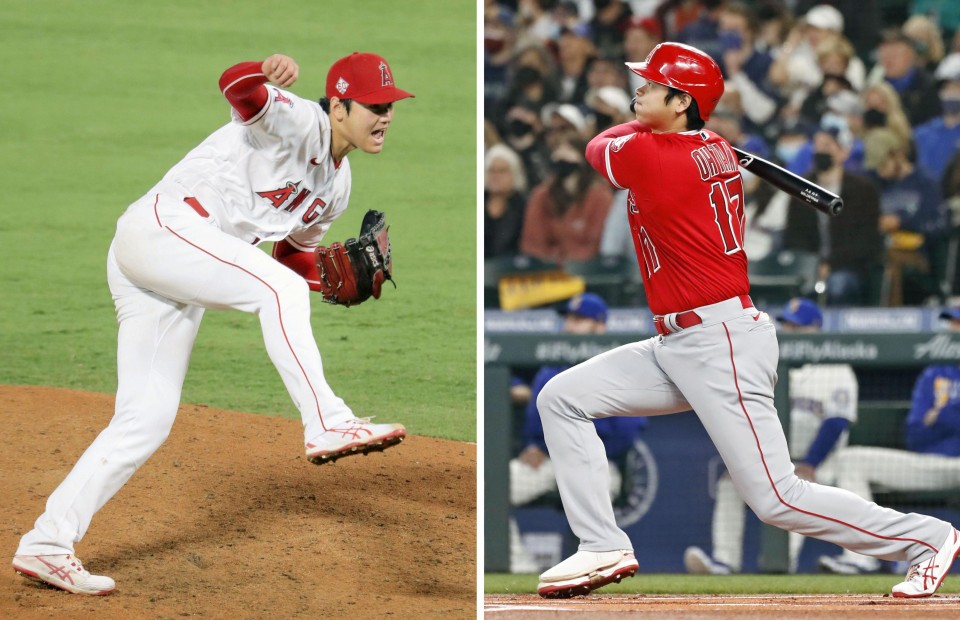 Combined photo shows Los Angeles Angels two-way player Shohei Ohtani pitching (L) en route to his ninth win of the season in Anaheim on Sept. 3, 2021, and hitting his 46th home run of the season in Seattle on Oct. 3. (Kyodo) ==Kyodo

Since he turned pro in 2013, Ohtani had been an experiment. Even his first manager, who inspired him to both pitch and hit, treated him with extra caution in a world where few believed a player could possibly have the stamina, durability, skill and mental strength to hit every day and pitch every week.

When the Angels signed Ohtani in 2018, their management was also hypercautious. The club benched him on days before and after he pitched and declined to let him bat as the pitcher.

That all changed with the arrival of Joe Maddon. Soon after the highly regarded veteran manager took over the Angels, he announced his intent for Ohtani at the 2019 winter meetings, saying he loved the idea of him batting on days when he pitched.

"I love it," he said. "Just because it doesn't happen all the time doesn't mean it can't happen. Don't treat your guys like china dolls. Sometimes we do go overboard with the protection. That's another 50 at-bats a season."

After fitness issues hindered Ohtani's batting and limited him to just two games on the mound in 2020, he reinvented himself over the winter with a new nutrition and fitness regime. And after promising Maddon he would be forthright about any physical issues, the skipper turned him loose on America this year.

All season, baseball fans heard references to Ohtani doing things that had not been done before in the majors for 100 years or longer, or never before.

He did not lead the American League in home runs or achieve his third career "Babe Ruth season" of 10-plus pitching wins and 10-plus home runs, and his .264 batting average was not among the best, but he led the AL in home runs per at-bat, intentional walks and triples. 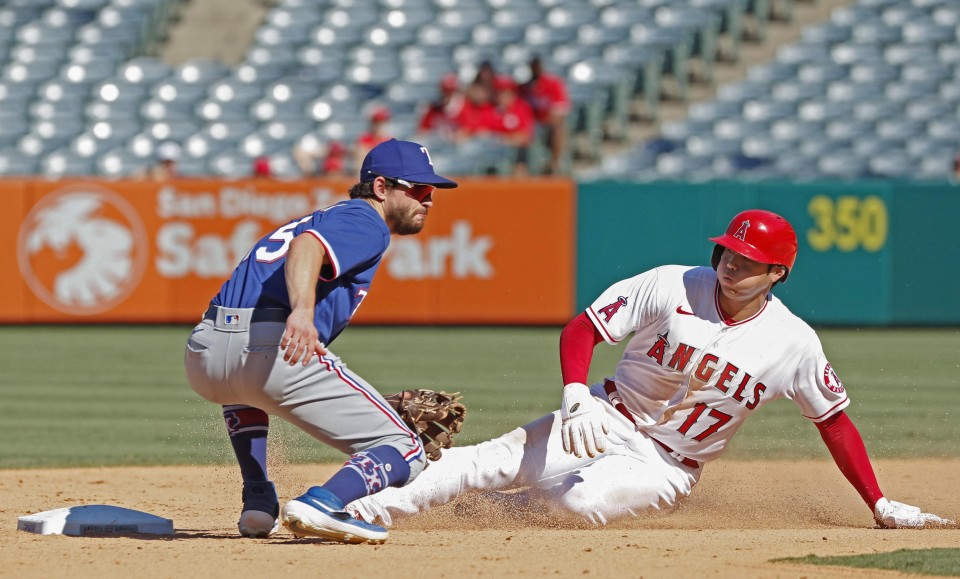 Shohei Ohtani (R) of the Los Angeles Angels steals second base in the eighth inning of a game against the Texas Rangers on Sept. 5, 2021, at Angel Stadium in Anaheim, California. (Kyodo) ==Kyodo

According to Baseball Reference, Ohtani became the first hitter in a U.S. major league with at least 45 home runs, 25 steals, six triples, and 90 runs scored and driven in, and that's just his hitting. Ohtani also pitched 130-1/3 innings, a figure he'd exceeded in three of his five Japanese pro seasons, but his highest major league total.

In 2021, Ohtani struck out 10.8 batters per nine innings, one of just 11 pitchers, including Japanese compatriot Yu Darvish, with 120-plus innings who struck out batters nearly that often.

One popular attempt to measure players' offensive, defensive and pitching value is wins above replacement. Baseball Reference ranks his 9.0 WAR as No. 1 in both leagues across all categories, a huge 1.2 wins better than No. 2, Philadelphia pitcher Zack Wheeler.

It was the kind of season Ohtani had strived for since he was offered the chance to both hit and pitch over the winter of 2012-2013 by the Nippon Ham Fighters of Japan's Pacific League, who made him their first pick in Japan's 2012 draft.

Although fans loved the idea, many former players and professional scouts were highly critical of using a teenager, throwing pitches as fast as anyone in Japanese baseball, as a position player. And though he only batted .238 as a rookie, he had extra-base hits in 10 percent of his at-bats, an extremely rare feat for an 18-year-old facing elite pitching.

Even in 2014, when Ohtani hit 10 home runs in 234 at-bats, and went 11-4 as a pitcher, Nippon Ham manager Hideki Kuriyama handled Ohtani sparingly as a pitcher who sometimes hit.

When a blister on his right hand limited Ohtani's pitching in 2016, Kuriyama let him hit every day for most of the summer, and he subsequently helped power the Fighters to the PL pennant.

Ohtani has wanted to be both the best pitcher and batter possible since he was a boy, but he has faced skeptics from Day 1 as a pro.

He told Kyodo News in 2017 of his belief that doing both makes him better at both, and after his 2021 season, it's hard to argue the point. Although his offensive numbers tumbled in the second half, his pitching got better and better as the season wore on. 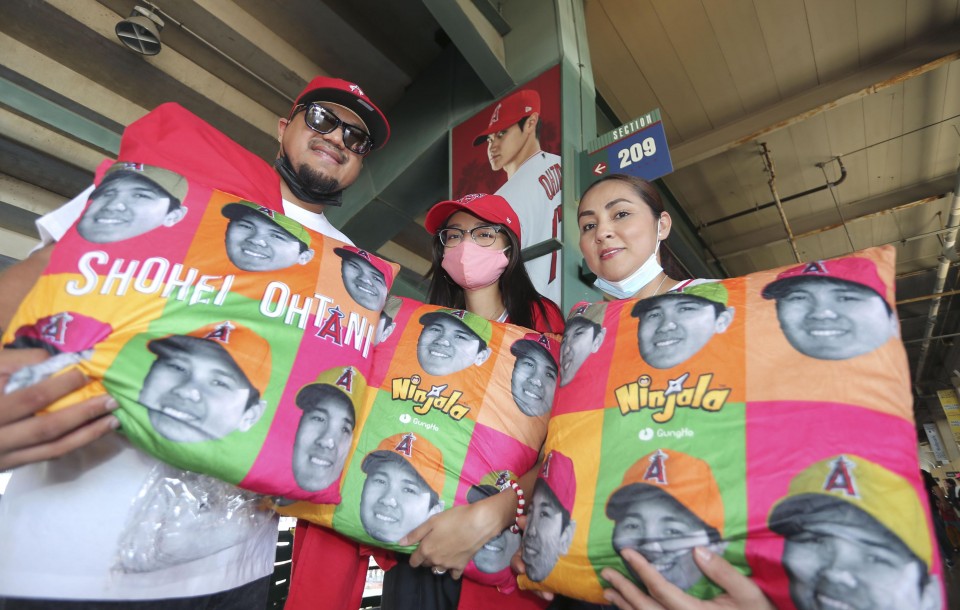 Fans show Shohei Ohtani pillows given away as a promotional item at Angel Stadium in Anaheim, California, on July 5, 2021. (Kyodo) ==Kyodo

Many firmly believe specialization in either hitting or pitching is necessary, with full-time two-way production impossible to achieve at a high level.

One would think Ohtani's 2021 season would silence those critics. But by playing in 155 of the Angels' 162 games as one of the hardest-hitting, hardest-throwing, fastest-running players in either league, Ohtani has only caused the doubters to reset their targets for failure. Now the naysayers are predicting Ohtani can't do it again because, well...it's impossible.

But after demolishing one seemingly impossible barrier after another, one can only imagine Ohtani savoring the thought that 2021 was not his summit but rather a base camp for his next climb up the mountain he's been scaling since he was a boy.