Elderly people in long-term nursing care for dementia and other illnesses are increasingly being rewarded for work at convenience stores and other businesses that are struggling to find staff due to Japan's acute labor shortage.

The feeling of purpose gained from working encourages people to become self-reliant and gives a sense of satisfaction, according to an industry insider, who says the initiatives offer an opportunity to expand a framework that has proven mutually beneficial to social welfare service providers as well as understaffed businesses.

"I enjoy coming here, and I am happy to see other people pleased," said Masako Kawashita, an 80-year-old who works at a Seven-Eleven convenience store in Funabashi, Chiba Prefecture. Wearing a company uniform and black apron, she performs tasks such as sanitizing shopping baskets. 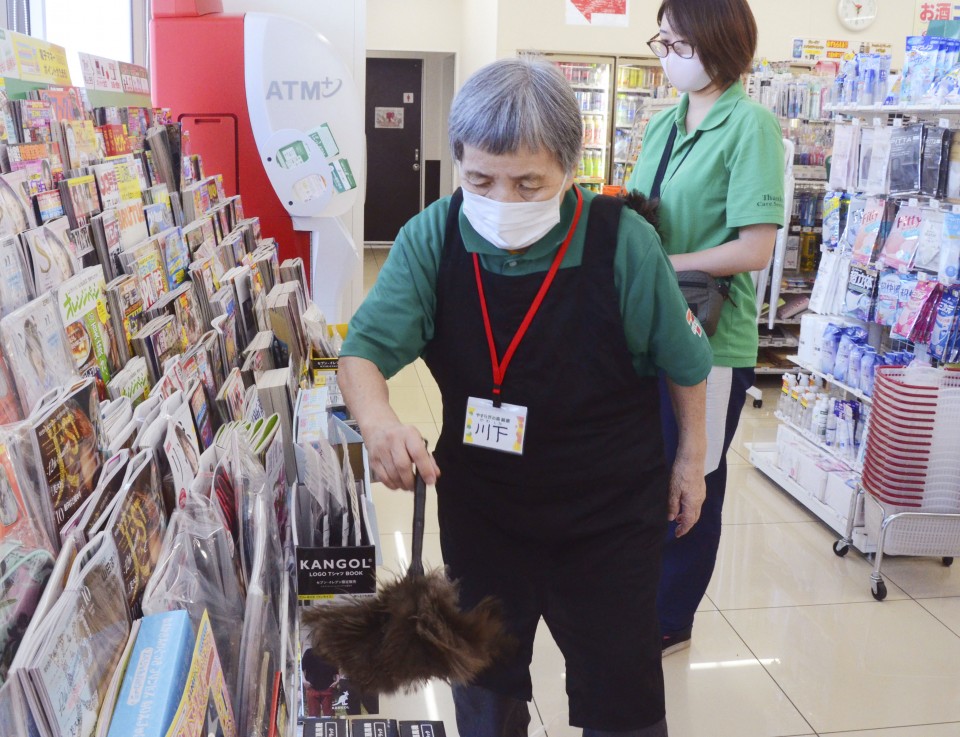 Under an arrangement between the store and a nearby care facility, Kawashita and others in their 60s to 90s who are certified as requiring long-term care for mild dementia, engage in work, except for waiting on customers, such as stacking and checking shelves with the support of a caregiver from the facility.

They work one hour each visit and receive a shopping voucher worth 1,000 yen ($8.80) for every three shifts, which they can exchange for products throughout the Seven-Eleven store network.

The program was started under the "Nanashoku (Seven Color) Project," jointly launched by care providers and convenience store owners to encourage dementia sufferers to engage socially and to add work to their weekly schedule.

They work during times set aside for recreational activities at their care facilities.

The users have a strong work ethic, says, Takayuki Morishige, 41, operator of Yasuragi no Mori Maebara, a care facility in Funabashi, which participates in the project, adding, "People who normally use walking sticks have begun working without them."

Store owner Yusuke Kujirai, 47, who employs the elderly workers at three of his stores, said, "Staff members are happy to see them come to work with such enthusiasm." Their presence has energized the stores, he said.

The ability to work to some level has little to do with dementia, Tsugumi Sato, 28, secretary general of the project, said. People with the disorder can work at businesses like this because people with diverse backgrounds and work histories can work at convenience stores.

In 2018, the Ministry of Health, Labor and Welfare informed local governments nationwide that users of care services would be allowed to engage in so-called "paid volunteer" activities.

In Machida, Tokyo, care provider Days BLG!, a pioneer in initiatives to engage people with dementia in meaningful work, began a program nine years ago to allow its users to place flyers in mailboxes and wash cars at car dealerships.

Takayuki Maeda, 45, representative of Days BLG!, who offers advice to care facilities across Japan, stressed the importance of people who can gauge corporate needs and conditions and match those to the wishes and abilities of elderly people.

He pointed out that understanding about the value of the project can only progress at speed if precedents are set. Once it is proven to work, local governments will be more supportive of the program.

Japan's job availability rises in Sept. ahead of economic restart